After a mini-Tour de France and a mini-Giro in Paris-Nice and Tirreno-Adriatico, the Volta a Catalunya sees a week of stage racing but it’s not a mini-Vuelta. There’s only one summit finish and no time trialling at all.

The field is packed with stage race specialists with Alberto Contador and Chris Froome as the obvious stars yet the outcome is far from predictable. With a series of tricky stages, variable weather and the hard final stage in Barcelona the winner will need to play their tactical cards carefully. It’s live on TV all week. 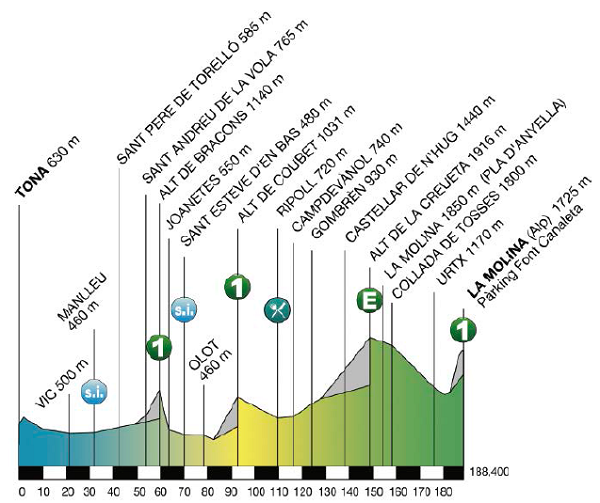 The format has seven stages across the region with many familiar places, riders who have done the last few editions will find familiar roads:

There are time bonuses with 10-6-4 seconds at the finish line and 3-2-1 for each of the two daily intermediate sprints.

Alejandro Valverde is the prime pick. At ease on the Strade Bianche he made the front group in yesterday’s Milan-Sanremo and has now made it to Spain. He will be half-broken today but can spin the legs for a couple of days before the summit finish which suits him with its gentle gradient. He can also snipe time bonuses throughout the race. Movistar are always a strong collective unit. Chris Froome heads up a very strong Team Sky. They look to have brought their Tour de France squad and Froome will probably need this more than ever. To exaggerate Froome could win the Tour de France without a team, with some luck he’d be in the right place for the climbs and can beat many GC contenders in a time trial. But for this week he’ll need his team to help him get every time bonus going. If Froome’s not up for the sprint then Richie Porte is the perfect Plan B and there’s even an outside chance for Wout Poels over the sharp climbs. Alberto Contador says he’s picked up a cold but wants to be competitive and like Froome has his grand tour A-team with him, albeit without Peter Sagan although this week would have really suited the Slovak. Majka is back on domestique duties, while Michael Rogers, Ivan Basso, Sergio Paulinho and Jesus Hernandez are on hand. Comparisons between Contador and Froome will happen but both are in different phases of their season, Froome recovering from a chest infection and Contador building to the Giro. Neither need to be on form although their rivalry is such that the Vuelta a Andalucia turned into a fierce duel.

Rigoberto Uran is Etixx-Quickstep’s leader but he’s not got the sharpest of sprints so once again he’s likely to place but winning outright is harder. Fabio Aru was discreet in Paris-Nice but strong, Diego Rosa and Dario Cataldo could be Astana’s best bet. With the UCI demanding the team’s licence is pulled it’ll be an interesting test of team cohesion.

Ag2r La Mondiale have a strong team with Romain Bardet setting high ambitions, he’s a better sprinter than might be suggested by his long limbs; Domenico Pozzovivo offers more options for the team unlike Carlos Betancur who remains overweight and undertrained and will use the race to ride himself into shape with the Giro less than 50 days away. Lampre-Merida bring a solid team with Rafael Valls who did a good Paris-Nice and is joined by Przemo Niemiec.

For others the story is about pressure to perform. Dan Martin leads a strong Cannondale-Garmin team still hunting for its first win of 2015 in fact it’s the only World Tour team not to win a single World Tour ranking point this year. The Irishman wasn’t scintillating in Tirreno-Adriatico but can sprint well from a small group, the same for Andrew Talansky who flunked Paris-Nice but has a punchy finish. To help their almost on home soil with several of the Girona-based pros benefiting from local knowledge. Wilco Kelderman flopped in Paris-Nice too and Lotto-Jumbo still wait for their first win too, it’ll be harder as they have only seven riders compared to the eight permitted. Tejay van Garderen needs a result after public criticism from his team managers resulting from his Paris-Nice performance. Finally Lotto-Belisol have expectations for Jurgen van den Broeck, the perpetual outsider who has what it takes to finish on a grand tour podium but who has only ever won one race during 12 years as a pro, this track record means the hunt for time bonuses won’t suit.

There are a lot of climbers but they’ll need to raid the race to win, it’s hard to see anyone given much room to La Molina. Still the likes of Esteban Chaves, Kenny Elissonde, Pierre Rolland and Mikel Landa can act as catalysts to liven up the race.

Sprinters: this is a hilly race and many sprinters have stayed away leaving opportunities for others. Luka Mezgec is back after winning three stages last year, Bryan Coquard will find the course ideal too while Ewan is in excellent shape after the Tour de Langkawi. IAM Cycling’s Matteo Pelucchi packs the power but the hills will be hard work. As ever J-J Rojas is a contender but a rare winner. FDJ bring Lorrenzo Manzin and Lampre-Merida have Roberto Ferrari, Lotto-Belisol could back Greg Henderson if not he’ll be leading out Boris Vallée. This week often smiles on punchier sprinters, watch riders like Carlos Barbero, Julien Simon, Jonathan Hivert and Julien Alaphilippe. 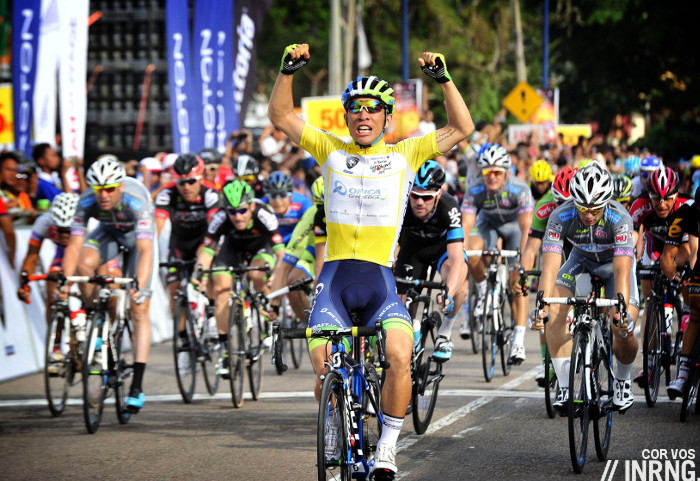 Neo-pro watch: fellow blog Café Roubaix has counted up 16 neo-pros make their World Tour debut this week. Caleb Ewan is an obvious contender for the sprint finishes, Orica-Greenedge have some of the best quality U25 riders going. Elsewhere watch for Miguel Angel Lopez, aka “Superman” who won the Tour de l’Avenir last year before signing for Astana, a bizarre choice given the lack of rider development and Spanish speakers, let’s hope he’s on a giant contract. BMC’s Manuel Senni will be on team duty but was an excellent U23 climber last year, the same for IAM’s Clément Chevrier although he’ll have more room to try something in the mountains. Louis Vervake won two mountainous stage races in the U23 ranks last year, now he’s with Lotto-Soudal.

Weather: a real mix with some grim conditions early in the week before the sunshine appears for the later stages.

TV: It’s live on TV with coverage on Eurosport. Each stage is forecast to finish around 5.00pm CET except Sunday’s final stage which has a 2.30pm arrival.

Previous post: The Moment The Race Was Won: Milan-Sanremo