A Tale of Two Races The Dubai Tour starts today and so does the Etoile de Bessèges. Both offer several days of racing in the early season but the comparisons stop there as the Emirati race outbids its rivals on almost every scale. The Etoile long been an essential part of the early season in France but will it survive much longer?

There’s nothing explicit to say the Etoile is struggling but the implicit signs are there, it’s not on TV and its website is basic. The Dubai Tour is on TV – Eurosport among others – while the Etoile will hope for a clip on the evening news bulletin on a regional news channel, (follow it in French via directvelo.com).

For races facing extinction we only have to look at the Tour Cycliste Méditerranéen, better known as Le Tour Med. This race has been a glorious fixture on the early season calendar with Mont Faron as the first summit finish of the year. Now it’s vanished, the race organiser says he has three stages that straddle Spain and France but the French Ligue says €150,000 in unpaid prize money needs to be resolved and for now it’s not on the UCI calendar either. 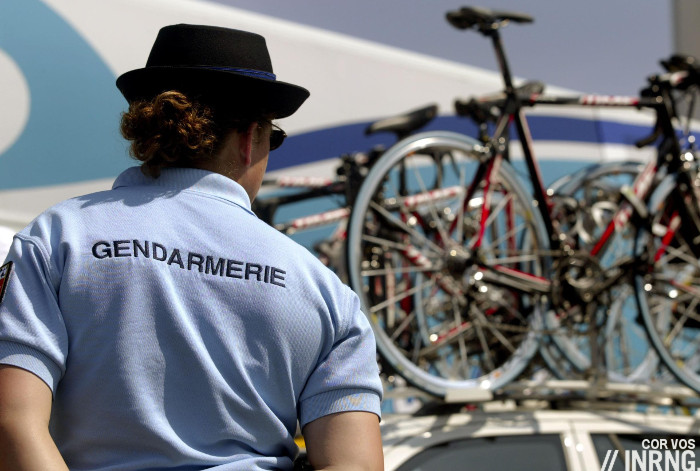 One problem for many smaller events is the rising cost of bike races. In recent years fuel prices have risen, hotel prices match strong gains in real estate prices and overall the cost of staging a bike race has risen much faster than the standard measure of inflation. Policing costs are big deal too, or rather there’s no deal. It used to cost €2.40 an hour per policeman for a bike race but this has jumped to €12.33 and was set to reach €20 an hour although a moratorium has put this on hold.

Today’s L’Equipe says the Etoile “is cultivating a vintage aspect” as it gathers former winners and stars to attend the race. In more ways than one because one worrying aspect is the lack of online presence for many smaller races. There is a self-selecting bias for a blog to overstate the importance of the internet but all the same, the Etoile de Bessèges and other races do give the impression of being behind when it comes to the internet, yet alone social media. Twitter, Facebook can be vacuous but they’re modern communication channels: they’re free and allow the race to reach around the world. I suspect none of this is by design or willingness, the organising committee behind the race is doing the best it can and there’s no budget to tend to the website, yet alone work on graphic design and cartography. This is symptomatic of many races, they are run by organising committees who gather for the love of sport. Many professional races remain amateur promotions, in the affectionate sense. Meanwhile in Dubai
They’re paying appearance fees for the best stars and putting them up in swanky hotels rather than the Logis Nîmotel in a retail park next to the A9 Autoroute. Media are flown over to stay in same comfort while graphic design agencies handle the website and marketing groups operate Twitter handles. Paul Smith designs the jerseys. It’s great to see them valuing our sport so highly.

So what?
Pro cycling is a business and as said many times before, the Tour de France was created to sell newspapers. If someone wants to organise a better-funded race with way more money the result is inevitable. The Etoile de Bessèges isn’t finished but you can see the light fading while the Tour Med looks like it’s gone for good. What is a loss to the French calendar is compensated by the gain in Dubai or elsewhere, there’s no net loss in race days.

There are questions of authenticity, that Dubai is simply spending money to import a bike race which comes in for a week and then goes away for the year, that this is cycling as an exhibition match rather than a league. Meanwhile races like the Etoile are there year-in, year-out but open too, there’s no VIP zones or security cordons. The danger is new races don’t get embedded locally: see the Tour of Beijing.

The die-hard French fan and the French team sponsor alike still need not worry too much, the Tour de France dominates the calendar. Simply riding in July is enough to justify a French team budget, it’s why the likes of Ag2r, Cofidis and FDJ have been sponsoring non-stop for almost two decades while the Tour itself is able to carry races like Paris-Nice and the Dauphiné with it. Part of the landscape

2020
The speed of the UCI’s calendar reforms seems to be slowing but there’s an air of inevitability and all the above is before any reforms draw a greater distinction between races.

Conclusion
Neither the Dubai Tour or the Etoile de Bessèges are the most consequential events. But their clash on the calendar is revealing, showing one slick race with a big budget against another that faces a struggle just to stay on the road, beset with headwinds like rising police costs but also missing out on free tricks like exploiting social media. You can follow the Etoile but it takes work, you have to go get the race rather than it coming to you. Still, it’s better than elsewhere because unless there’s a miracle the Tour Med is about to vanish.

Sport, like the rest of the world, is becoming more globalised and pro cycling is seeing more races with better organisation and promotion, the weaker events on the calendar will get picked off. Meanwhile riders enjoy comfy hotels and get celebrated in opening ceremonies. Fans these days “consume” racing via television than the roadside. There’s a lot to celebrate from well-funded races but we should hope the Etoile de Bessèges can stay on the road too.