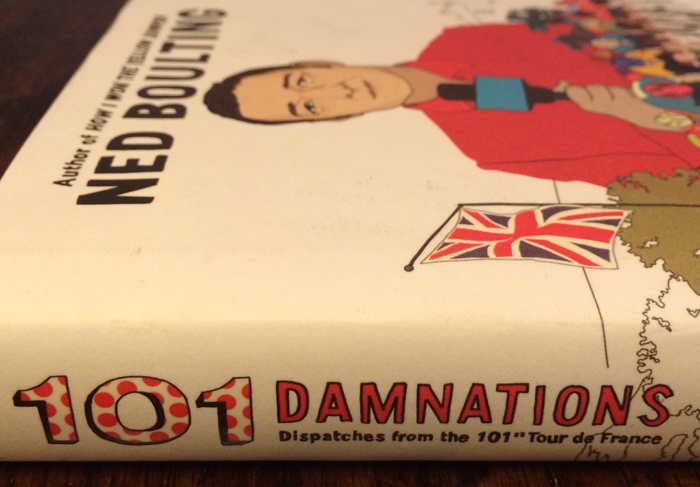 The Tour de France is more than a bike race. It’s a theatre with many plays, plots and stories. Spectators enjoy the countryside, business deals are done and a lot of people work hard to make the show happen. British broadcaster Ned Boulting is among the workers as he travels around France to put the race on television. In the wake of Leeds grand départ Boulting has written up his experiences of this year’s Tour along with other anecdotes and more.

Boulting seems to play the outsider role in broadcasts and writing, he’s the non-cyclist dispatched to cover the Tour de France and this status places him onside with much of the audience who need gentle education to explain the overall classification or the points competition. A previous book sees himself mocking his own use of the term “yellow jumper” instead of yellow jersey. The same self-deprecating tone appears in this book as does the outsider role, a detachment from events and locations. But if he’s the outsider, he’s not always the fool. When the race visits Cambridge he gets nostalgic for his days as a student. Yes he’s got a degree in Modern Languages from the famous university. It all goes full circle when he finds a giant mock-blueberry vehicle from the publicity caravan blocking the view of his alma mater:

What had happened to my life? How had it come to pass that the oversized, lurid marketing float of an international sugary conglomeration now bore more comforting familiarity, more relevance, meant more to me than my academic home for those formative years… …when did Haribo replace Victor Hugo in my life?

The horror of a plastic blueberry on wheels trumping Hugo is one thing but Boulting is also delighted by the race if not the commercialism. Perhaps it’s the studies but language matters for Boulting. He analyses the bland vocabulary of many a pro cyclist on Twitter or in interviews – hard to blame them when they’re so tired – and offers a few pages on the dilemma of pronunciation. He’s fluent in German so when Jens Voigt goes on the attack does he say “Focht” or “Voyt” because the first is the correct way to say Voigt and the second is the most common way, the expected form among the audience. The answer? There is none, he even admits that he once used one version and then the other later on in the same broadcast.

The book features a range of anecdotes from the Tour, whether buying beer with David Millar, chatting to Peta Cavendish, Dave Brailsford crashing his sports car or the more predictable descriptions of hotels en route. There’s work too, take interviewing Peter Sagan. As part of the daily post-stage protocol the wearers of each jersey must parade past all of the main television channels for a quick interview. Sagan isn’t loquacious, at least not when interviewed in English and Boulting describes the struggle to get him to say something original and sometimes just to get him to say anything.

This year’s race was big on commemoration with the route tracing the events of a century ago and this is mentioned but also used as a means to explore history, whether the Tour’s history one hundred years ago or a wide look at France at times. He captures images of the race well and other details around whether the gaudy caravan or “uninspiring towns whose houses bore the trademark cladding of diamond-shaped downward-pointing concrete tiles on their flanks”, places enlivened for a day before they return to normal. There’s a look at more history including things I never knew, like the role of the Cointreau brothers – they of the drink – in the 1903 Tour de France or the story of the world champion and hour record holder who finished up as a getaway driver for an armed robbery gang. There’s a look at more recent history too such as a tribute to Didi Senft, better known as El Diablo.

The book ends, like the 101st Tour de France, with Marcel Kittel. Boulting visits him in eastern Germany and describes the German and German cycling as well as an explainer on sausages. The sprint star is near-anonymous in his home town of Erfurt (maybe this is changing fast since he won a big popularity contest). As he rides around in Kittel’s sportscar, the German explains why he’s not interested in the classics:

“Why should I bother with them. They’re fine for Boonen and other riders like him who haven’t got the power to compete at the top end. But why would I be interested? Only one thing matters for me, and that’s the pure, flat sprint.“

That’s quite a quote and makes several things clear, for example on the role-sharing with John Degenkolb or his willingness to be a specialist for obvious, lucrative reasons. Moments like this make the book much more than notes from a race in 2014.

Conclusion
I feared the publisher’s brief (“we need a book about last summer’s Tour de France in Britain but the tale of Nibali winning unopposed won’t sell”) and worried the book would be an collection of first-person diary notes spun into a hardback. Fortunately the book seemed to get better and better with often entertaining dispatches and the diversions into history and linguistics work well.

It’s recommended for a British audience, others might miss some of the cultural references although many English-speaking fans will spot Boulting’s amusement at some Liggetisms (“Lourdes is a Mecca for Catholics”) and more. Buy it if y0u’re keen to relive the summer coverage of the Tour and you’ll be rewarded by the extras.