The route for the 2015 Tour de France is out. As usual a lot leaks out before, velowire.com sleuths the stages and yesterday race organiser ASO accidentally put a PDF online with the route yesterday. But it’s still a comforting ritual, a projection to the other side of winter.

This is a chance to see the map for real and to get more info on the route such as the intermediate climbs, the amount of time trialling and novelties such as the return of time bonuses. Plus race organisers can sell us a story, a theme for 2015.

Stage-by-stage
Don’t call it a prologue, the opening time trial has been known for ages but assumes more relevance as the only solo TT in the race.

The Mur de Huy features. Famous for its steep climb the hardest part could be the 10km approach as teams fight for position to place their leader. Time bonuses are back but only for the opening week.

The Tour returns to the pavé. Too soon? Perhaps if the fear factor wears off but the ratings soared last year. With so many climbs this is a rare chance to flick the mountain goats out of the way. 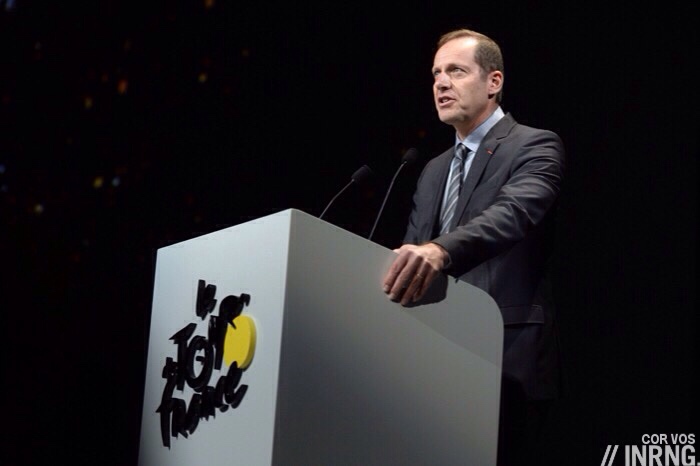 The race crosses the north of France for the usual high tension sprint finishes and a punchy uphill finish on the Mûr-de-Bretagne climb where Cadel Evans and Alberto Contador dueled in 2011. The time gaps will be small but it promises another finish for all comers, classics riders vs the yellow jersey contenders.

The team trial comes relatively late in the race, after the crash-fest opening week. A UCI rule says a TTT must happen in the first third of the race but ASO will ask for a derogation. The sensible rule ensures all teams start on a reasonably equal basis and this might not be the case next July. The first rest day ends 10 day run, apparently the longest it’s ever taken for the Tour to reach the mountains, meaning a long nervous period of crashes, crosswinds and changing race leadership.

Pierre St Martin is the first summit finish, a brutal shift of gears after a week of churning a big gear. The road to the ski station has been used once before, in 2007, but in reverse, a descent. It’s a tough climb with a very awkward middle section with 8km at 8-10%. Ignore the average gradients, the slope rears like a bucking bronco (15% in places) but calms down to the final 6-7km. Hard but it could allow riders to regroup. The Pyrenees get three stages with another summit finish on the awkward Plateau de Beille which will have many setting their stopwatches to compare with times past.

A visit to Rodez looks unremarkable but it’s a nod to race sponsor RAGT, a crop seed company, that is based there. The race returns to Mende and the climb of the Croix-Neuve. Not a summit finish but anyone with a gap over the top can expect to keep it to the line.

The race heads for the Alps and more summit fever. Note the distances, 161km, 185km, 138km and 110km. In the past this would feel wimpy but these short stages are designed to encourage action. It’s all hard and features the Lacets de Montvernier for the first time. The final stage in the Alps is a contrated affair and a copy of the 2011 route where Pierre Rolland sacked Contador and Samuel Sanchez.

Route Verdict
A vertical Tour de France made for television. The route is packed withnratings best hits like cobbles, early uphill skirmishes and a series of summit finishes.

Early time bonuses will ensure the yellow jersey changes shoulders during the first week instead of belonging to the Utrecht TT winner. The longer the race goes on the more it should settle into a pattern. About as many kilometres are allocated to the pavé as a solo time trial. With so little time trialling the mountains will be judge and jury. 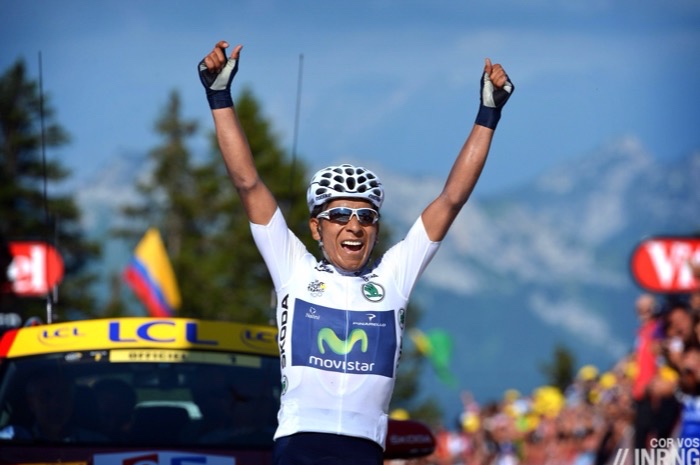 Who will win?
With over 250 days to go any crystal ball is cloudy. Antoine Blondin wrote the Tour de France is “first and foremost a geography lesson” so knowing the terrain helps to see what’s coming. But only partially, we cannot imagine the weather, tactics and so on.

On geography alone 2015 is for the climbers. Never have there been so few time trial kilometres, at least in the modern era. Nairo Quintana and Alberto Contador are the obvious picks. Quintana is still eligible for the white jersey next summer but if time is on his side this is likely to be his best chance in a long time.

Vincenzo Nibali can be happy with the route given a time trial is probably his weakest area. Chris Froome’s saying on his website he might not ride, rude or just honest uncertainty? Le Tour parfait?
L’Equipe got Romain Bardet and Thibault Pinot to draw their ideal routes for a feature in today’s paper. But remember the Tour route is often decided 12-18 months in advance: the 2015 route isn’t a reaction to domestic success last summer. But it’s very suitable to Pinot and Bardet, even if Pinot is maturing as a time trial rider.

Bis repetita?
Summit finishes can be audience blockbusters but with so many next year some viewers might feel they’re watching a repeat episode. A mountain pass means reduced speed, removing the single most important tactical element of road racing: drafting. Reduced to a contest of power-to-weight ratios the results are often identical if not similar. The risk is the third week becomes a parade confirming a hierarchy already established in the Pyrenees, especially as there’s no time trial after the Alps to tilt the balance back.

Sprinters Jersey
The points competition is often won by a sprinter but there’s often confusion among a large share of the audience: why doesn’t the best sprinter wear the green jersey. Of course you know it’s because the can’t always take points every day. But a new points scale will reward the sprinters even more, tilting the competition towards the likes of Marcel Kittel and away from Peter Sagan. But the Slovak still remains the obvious contender.