Several riders had passport problems before the Giro but of the travel kind and could not get a visa for the start in Belfast. Now Roman Kreuziger has passport problems of the other kind with the UCI questioning his blood values and he’s now been suspended by his Tinkoff-Saxo team and won’t ride the Tour de France.

This post isn’t about doping. Instead it’s about procedures and probabilities so apologies if you wanted something scandalous and bloody. What’s happened and what’s coming next?

The Passport Process
A reminder that the bio passport is a record of an athlete’s haematological parameters. A variety of measures are taken when a rider is tested and these are all logged into a database and over time a “longitudinal profile” is established. Unlike the binary positive or negative of toxicology testing where a lab tests for banned substances, the passport looks at changes in levels, using logic and mathematics, for example Bayesian statistics, to look for anomalies and the more data are logged, the more any oddities and anomalies can be observed. Here’s a screenshot of the passport software:

This process is run by the Athlete Passport Management Unit (APMU) which is a WADA-funded scheme based in Lausanne, Switzerland – just around the shore of Lake Geneva from the UCI’s HQ. The software rings an alarm bell if an athlete’s numbers deviate from an established patten. When this happens an expert with a background in clinical haematology, sports medicine and/or exercise physiology reviews the data from the system. The expert has four options:

In the event of the fourth option, the procedures continue for the APMU. Two more experts are asked to evaluate the data and they can each recommend one of the four options above. All three must review the same data set and only if each concludes that, in the words of WADA’s procedural manuals, “it is highly likely that a prohibited substance or prohibited method had been used and unlikely that it is the result of any other cause” will the case proceed. If this is the case then the APMU creates a dossier with the athlete’s age, gender, sport and a range of other information such as the chain of custody for the samples taken, whether the athlete was at altitude and so on. This file is reviewed and once again all three experts have to unanimously concur for an “adverse passport finding” and then an anti-doping organization is notified, in this case the UCI. 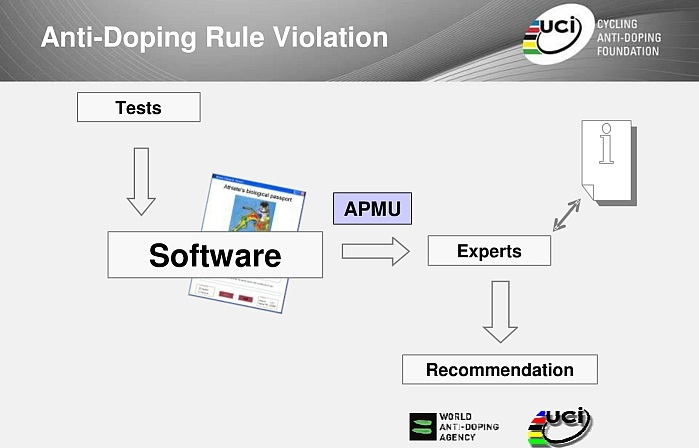 The UCI then contacts the rider and WADA to advise them that it is mulling an anti-doping case and includes the APMU dossier with the data, sample custody and more along with the request for the athlete to explain the data in the dossier.

This is what happened with Roman Kreuziger, the three experts have each unanimously concurred there’s a doping case to hear regarding anomalies in 2011 and 2012, the seasons spent with the Astana team. The AMPU experts and have contacted the UCI who in turn have passed the dossier on to Roman Kreuziger for explanation.

This isn’t a case of popping in for a chat:

Note the time span, even if we take the end of the suspect data period which was the 2012 Giro it means two years have elapsed before the UCI swings into action. This is not good and we’ll return to the delays and timings below.

What Next?
The UCI can still drop the case but based on his team’s statement, a prosecution is due to start. This will trigger a UCI press release much like the brief one we got for Jonathan Tiernan-Locke last December where it instructed UK Anti-Doping to bring a case against its rider.

Of course like the Tiernan-Locke case and others this is far from the end of the matter. If the UCI instructs the relevant Czech agency to bring a case against Kreuziger this will take time to build and prosecute. There’s a grey area in the rules because it’s not clear that a rider can be provisionally suspended even if there’s a case being opened against them. The WADA Code allows for this but the UCI rulebook only refers to the classic A and B samples, where a rider is provisionally suspended following an adverse test of their A-sample.

However riders have been stopped from racing by their teams, see Carlos Barredo who was stopped from racing by his team even when the UCI were still in the asking questions phase, presumably because the team were in the last chance saloon with their sponsor and couldn’t afford to look lenient. In this case it’s likely Kreuziger is going to be “benched” for months and even years.

Passport Delays
If you saw the timeline above for Kreuziger’s case and found the delays astonishing then think twice. Because all these cases have a tendency to take many months if not years. Carlos Barredo has been mentioned above, the UCI asked for a case against him to be opened in 2012 and there’s still no verdict today. Belgian’s Leif Hoste case saw an 11 month gap between the UCI requesting a case and his conviction.

It could be that Kreuziger’s experts prove all’s well once the case is heard and it’s wrapped up quickly but given the UCI seems to be unsatisfied with his response it’s suggests a to-and-fro that could go on for some time.

Another delay is the gap between the apparent anomalous data and the UCI starting to ask questions. But this is how the system works, it is unlikely the AMPU “alarm bell” rang the instant the data were logged. Instead it’s the pattern over time that allows retrospective analysis.

Regardless of explanation and excuse, these delays are cruel and frustrating for all. It’s bad enough to be linked to the bad news – innocent until proven guilty – but the delays are terrible. However this is a subject that just can’t be rushed. We’re not talking about toxicology and the positive or negative of a sample analysis but instead a sophisticated analysis of data and trends. It’s a matter of nuance and a degree of proof rather than the certainty of a banned substance in a test tube with arguments and investigation on both sides.

Conclusion
Hopefully you have a better idea of how the biological passport review process works. It sounds serious for Roman Kreuziger given three experts agree on a high probability of doping. He says “no” so this sets up a lengthy clash and one that could go on and on to the Court of Arbitration for Sport.

Next post: Tour de France: Who Will Win The White Jersey?