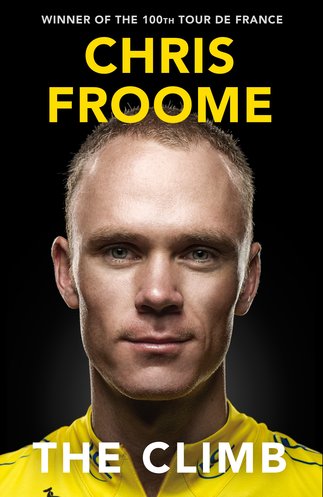 The Climb by Chris Froome
The latest book from the production line of British cycling autobiographies featuring cyclists that are still mid-career but red hot given the Chris Froome vs. Bradley Wiggins stories and unlike the books by Wiggins and Mark Cavendish, this is Froome’s first book.

The rivalry and gossip over team leadership have grabbed the headlines but there’s more, an alternative title could have been “Out of Africa”. For many readers though the big question is whether it explains how Froome burst from caterpillar to yellow butterfly.

Pet Python
Much of the opening third of the book is about childhood in Kenya. Cycling arrives like it does for most, a means for the child to have fun and explore the world. Only Froome’s world is different, while he grew up in Karen, a genteel suburb of Nairobi there’s no escaping the surroundings. He has two pet pythons and tells how he caught rats to feed to them, even heating them in the oven in a bid to make them more appetising and when the snakes grew too big for rats, he starts rustling rabbits for the reptiles.

Career Path
School is different too, he might be thousands of miles from Europe and its cycling culture but he ends up in a South African boarding school that has a cycling club. It’s no Harry Potter tale, he starts in one school that’s so strict he ends up moving to the other with its cycling club and even where staff are keen cyclists. I bet Alberto Contador and Vincenzo Nibali didn’t have cycling clubs at school. But there’s a rift-valley gulf between Froome’s progress to the elite ranks and almost everyone else’s. Not for him the Olympic plan and British lottery money, nor the traditional network of clubs and the pyramid structure that sends talent up from the base in countries like France, Italy and Belgium. Instead it’s David Kinjah and the dirt roads of Kenya. Some of the stories are known, for example how Froome “hacked” the email of the Kenyan federation to send himself to the UCI World Championships in Salzburg – scene of his infamous crash with a marshal – but the book explains more in detail, for example how he managed to get into the email in the first place. L’Equipe often remark at Froome’s politeness in their reports but this book has its moments of rudeness. The ancient Greeks had parrhesia which means “to speak of everything”, to speak the truth even if it upsets. The modern anglo-saxon means calling a spade a spade. He clearly never clicked with Greg Henderson and the Kiwi rider is advised to steer clear of this book. As laudable as parrhesia maybe some things are better left unsaid? Meanwhile Claudio Corti doesn’t come out looking good. Now manager of Team Colombia he was the Barloworld team boss but “at Barloworld nobody had ever really called” but this careless management was instructive to the way the team worked rather than a mean jab. There’s a respect for Alberto Contador on the bike but a touch of suspicion off it: a scene where he tries contract negotiations in a Madrid nightclub with Bjarne Riis does mention the doping past of Riis and Contador. It’s not a devastating critique of Contador’s past years at Discovery but there is a finger being pointed in their direction.

The Hot Topics
Many readers will want to know if the book deals with the two pachyderms in the parlour, namely how Froome rose from obscurity to grand tour winner and the relationship with Wiggins. The book covers both.

On Froome’s improvement the subject isn’t always approached directly, it’s more the gradual tale of improvement. When Bobby Julich starts coaching Froome the American admits to googling his new rider because he was off the radar. Meanwhile Froome sees results like 9th place in the TT stage of the Vuelta Castilla y Léon as significant when not many others noticed it; even Dave Brailsford is texting Froome’s agent:

“What has Chris done all year? He’s done nothing”

This is a book review rather than a synopsis so I won’t list all the points and explainers but it’s more a story than a line-by-line rebuttal to the critics. As for Wiggins, he is mentioned a lot. How much? Well a search reveals “Brad” appears 377 times, although one is a schoolboy in SA and another is a “labrador”. That’s almost once every page, a feat considering Wiggins wasn’t in Kenya during the childhood days. Qualitatively Wiggins is mentioned more than everyone else and the result is rarely flattering. Froome acknowledges the shared introversion meaning chat doesn’t come easy, the starting point for divergence but the suggestion is that the problem is more than rivalry, here was a team built around Wiggins but others struggle with him at times, Peter Kennaugh finds the dinner table conversations awkward. Later you’re left with the impression of office politics on a grand scale but also two boys unable to sit down over a beer – or a recovery shake – and talk through things, instead camping on contractual agreements and communicating via managers instead of together.

Haunted by the Ghost?
The book is ghostwritten by Irish sportswriter David Walsh and a couple of times you wonder if the voice is Froome’s light African lilt or Walsh’s Irish tone. For example there’s full description of the history of Paris-Roubaix and the recounting of how many times Bernard Hinault won it, I suspect this history matters more to Walsh than Froome who rode the race but probably hasn’t boned up on the history that much. But this doesn’t detract from the story, you get some candid views from Froome for example the poignant moment of his mother’s cremation in Kenya. As for the writing style, it’s that simple autobiographical prose in the first person, “I felt this, I then did that” but the short sentences keep the pages turning and there’s the occasional flourish, Garmin-Sharp’s Stage 9 rampage in last year’s Tour is described a “jihad”. It’s a long book with recent events getting told in expansive detail, some stages of the 2013 Tour de France are told from start to finish but on top there’s breakfast and what happened in the hotel in the evening. There are several typos (the city of “Tarbres”, Chris Anker “Sørenson”, “Cadal” Evans and Juan-José Cobo is listed as riding for Saxo Bank instead of Geox-TMC etc). There are many on here too but I and a helpful reader or two can correct and amend while it’s harder in a book.

Froome’s nationality is explored. The book helps to explain things, he grew up as a son of British colonialism – Kenya is many things today but it was once a political construct of colonial rule. It’s not just a sense of belonging but also one of escape, he also opts to ride with a British licence as a way to distance himself from a seemingly rotten Kenyan federation.

It’s not all issues, rivalries and power struggles. There are many tales in the book from a salute to David Moncoutié to the tale of Barloworld Froome travelling around Europe with a beansprout kit in his suitcase as a counter to the Italian love of pasta. A typical day on Tenerife is explained as is the warm-up routine before a time trial in case you want to copy it. It’s amusing and informative but the tale of his Kenyan team mate riding the Tour of Egypt is astonishing: not to spoil it when a rider drops out of a race it’s said they abandon but here the race abandoned the rider. Conclusion
The DNA of ghostwritten sports autobiography underpins the book and if it’s no rock and roll tale it is very readable as the pages fly by. The wider public might want the gossip but it’s the “out of Africa” tale that stands out, Froome’s privileged upbringing means it’s not a tale from a mudhut to Monaco but it’s almost equidistant and there’s plenty to tell about the journey. Even if he’d never gone further than the Barloworld team and contract renewals with Pro Conti teams it’d be worth reading. But a Tour winner? The Climb is career path that resembles a maze, there are countless occasions where luck steers him to serendipity, so many times he gets a break when otherwise a dead end was waiting. One false turn and you sense he could easily be guiding MTB adventure holidays in the Ngong Hills of Kenya.

If you’re wondering why Bradley Wiggins isn’t riding the Tour de France the answer is in the book: it’s not just that they don’t get along, it’s because the antagonism is destructive. This book can be seen as instrumental in recent news but read it to see how there’s little more stirring anyone could do. Sky’s management don’t need to buy the book to discover the problem; after all we’ve had this saga a year before too.

The title of “The Climb” does beg question of whether there’s a descent ahead. Inside Froome has a fragile side, the confident racing masks some tactical risk taking and rivals might even like to buy a copy or task a manager or coach to pour over the book; for example he hates being attacked on the flat.

This adds to the Ventoux-sized pile of British cyclists who issue autobiographies mid-career. You almost want to see the books published in ring binders so you can slot in the next chapters. Froome has more chapters to add so this is Froome’s account of where he’s come from rather than where’s he going next. For that there’s the Dauphiné and the Tour and beyond.