This is the stage that many fans and locals have waited a long time to see but the riders will be less keen with grim weather conditions ahead. It’s still not certain whether the proposed route is viable with RCS studying weather conditions.

Huge climbs and the short distance means this could be an explosive stage. The Passo Gavia is infamous and the Passo Stelvio is the literal high point of the race and a very challenging climb with thanks to the triple combo of length, gradient and altitude. All this before the climb of Val Martello, 22.3km long at 6.4% but with a series of steep steps to climb on the way making it ideal for attacks.

The Route: the stage starts in Ponte di Legno, wooden bridge and many riders will fear wooden legs after the rest day. A brief descent leads straight to the Passo Gavia, one of Europe’s great climbs and a harsh way to start the day. It’s 16.5km long and 8% average but after a relatively gentle start, the slope regularly nudges 10% on the upper third. It’s followed by a fast and regular descent, the road has been resurfaced in places. It’s a major mountain pass and most of the corners are visible and predictable but easier said than done given the grim conditions (see “weather” below). 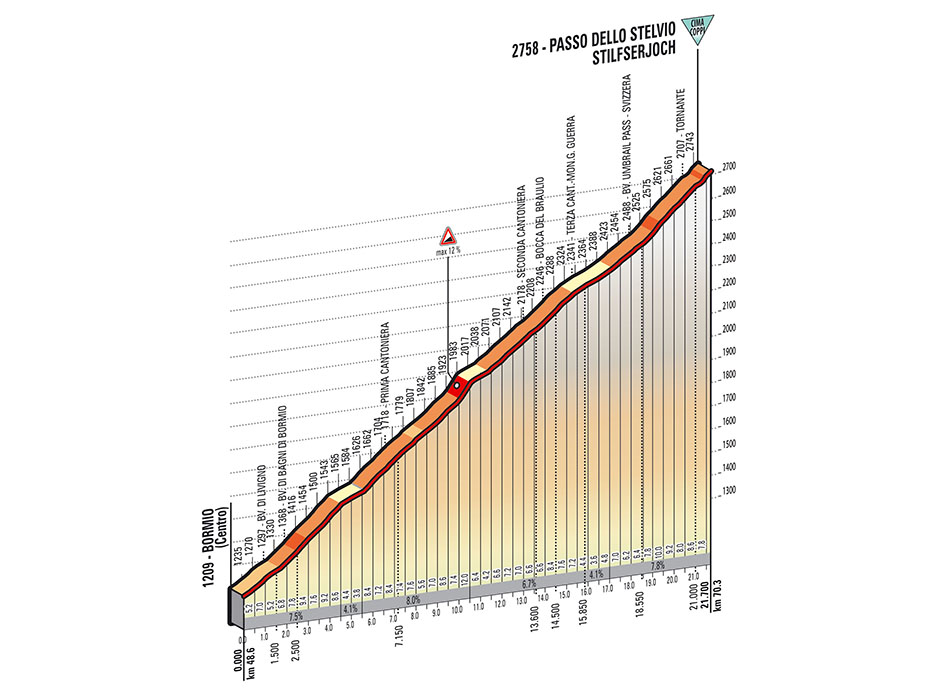 The Stelvio is next. At 21.7km long and 7% it’s an endurance effort and almost an hour’s climbing even for the best. Again the average is flattered by smoother sections. Once over the top the race tackles the famous Trafoi hairpins at speed. Again it’s a major road, an engineered grade most of the way. Then follows the brief “flat” section in the valley, a chance for riders to stock up on food and drink.

The Finish: the race funnels up the scenic Val Martello, a wide road that gradually gets steeper and more narrow the further you go. This means the 22.4km distance and average of 6.4% is are not useful, the climb gets much tougher than the average suggests and a flagging rider will find the going worse and worse. Note the constantly changing gradient on the diagram above, it illustrates just how irregular this climb is.

A series of hairpin bends lie near the finish as the road rears up to 14%, La Gazzetta describes this as a “cobra” today. Only the final 70 metres are flat.

The Scenario: the first climb lends itself to a breakaway. Maybe Julian Arredondo goes off on a raid to bag more mountain points. This is his first grand tour and he’s been looking more and more tired, it is easier to bag points early in the stage than late. Racing into the third week is a novel experience for the curtate Colombian . Still he and many others will have their eye (and wallet) focussed on the Cima Coppi prize at the top of the Stelvio. This is the prize awarded to the first rider to cross the highest pass in the race. I think Pierre Rolland might want this and so will his team: Europcar manager Jean-René Bernaudeau won a stage of the Giro over the Stelvio and upon retirement opened a restaurant called Le Stelvio.

Spare a thought for Nacer Bouhanni who will today reach new heights. He’s never climbed a mountain pass higher than 1,999m – the Col de Sarenne in the 2012 Dauphiné – so the Stelvio will be something novel. The same battle awaits other riders who must aim against a tight elimination delay.

Otherwise it’s a hard stage for a breakaway to get away on, no sooner will a breakaway establish a small lead and we’ll see the GC contenders, probably led by Movistar, crank up the pace. Anyone up the road will need a hefty advantage before the final climb, think five minutes. The Contenders: the weather could be both the winner and the loser today and assuming the stage proceeds unchanged victory could depend on wardrobe selection. Cycle clothing has improved a lot in recent years but it’s still limited against freezing temperatures, wet roads and 80km/h wind chill on downhill runs, especially during a race when there’s little time to change.

Nairo Quintana is the prime pick. His form is improving, the antibiotic course has finished and this is a stage for the climbers. But apparently he’s still to shake his illness,

Fabio Aru outclimbed everyone on the first major summit finish of the race. On this result alone he’s catapulted into an obvious contender but this a very different stage with two giant passes climbed and descended in tough conditions, experience counts for plenty. Of course Aru was part of Vincenzo Nibali’s blue guard last year and coped just fine.

I don’t think Rigoberto Urán will win but of course we’ll see how he fares, he’ll look to ride steady and protect his lead. The probably for Rafał Majka who might prefer to “camp” on his third position rather than strike out for better.

Another Colombian; another Fabio: Fabio Duarte is climbing very well. I’d been expecting more from him early in the race but perhaps he needs the high mountains? Second on Montecampione means he’s in great shape.

Pierre Rolland is due a stage win but his random style of racing means we just don’t know when it’ll come. Will he launch a long range raid up the Stelvio? Watch to see if Europcar send riders into the early move. I’ve mocked his scattergun tactics but it’s something to celebrate. Europcar need UCI points to stay in the World Tour Rolland is not racing to suit the team’s spreadsheet.

Domenico Pozzovivo has a chest cold and today isn’t going to help him. He’s also not the best descender in the wet. If he can make it with the leaders to the finish the climb does suit his riding style but illness is likely to find him limiting his losses. Androni’s Franco Pellizotti seems to be getting stronger and has, in the past, been a rider for the third week of the Giro.

Weather: drizzle in the valleys and the possibility of snow at altitude. Temperatures will struggle to get above freezing at altitude. The longer the race goes on the warmer it will get and the final climb promises rain showers. So far weather forecasts are proving reasonably inaccurate so we’ll know more before the race starts.

The stage starts at 12.35pm Euro time and keep a look out to check it’s on because if the snow gets too thick or icy then the plans will change. If the stage goes ahead then your viewing isn’t guaranteed either, the bad conditions can prevent broadcasts, you might remember the lack of pictures from last year’s stage to the Jafferau.

The Stelvio is forecast to be climbed around 3.10pm and the final climb starts at around 4.25pm. The finish is expected around 5.10pm.

Word of the Day: Joch meaning pass in German. The literal translation is “yoke” or the wooden frame used to harness cattle to pull a plough but the Germanic word is used locally in this part of Italy to mean a mountain pass. The famous Passo Stelvio is also known as the Stilfser Joch.

We might think of Italy as a land of Italians but many parts of the country have people speaking regional dialects. In this area of Trentino they speak a different language altogether, German and along the way the riders will pass bilingual road signs warning, say, of hairpin bends in Italian and German. There is also Ladin, local language too. Plus there are dialects, local versions of Italian spoken among locals.