Who will win the Giro? The forecast for tomorrow’s weather seems hard to get right so predicting anything for the rest of the week seems tough.

Let’s run through the situation of each of the main contenders. First Rigoberto Urán is in the lead but since the time trial he’s been losing ground to rivals on the uphill finishes, especially Fabio Aru and Nairo Quintana who have taken time on both stages. If this continues Urán can play off riders against each other for example should Quintana attack then several others have a shared interest in containing the Colombian.

Cadel Evans is a tenacious rider but can he hold on all week? He lost time to most of his rivals yesterday and if this carries on he’s doomed to slide down the overall classification.

Rafał Majka is now the stealth rider of the moment. He’s rarely making the moves but tracks his rivals cleverly. As a young rider in the white jersey he’s everything to gain by continuing with this tactic as it could get him on the podium, a result he’d surely sign up for today? 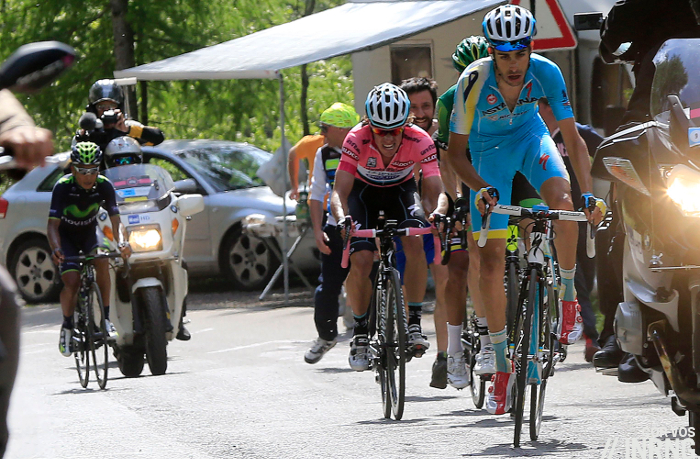 Fabio Aru is the man of the moment. His dominant performance yesterday has seen him in the limelight and with this comes both pressure and encouragement, we can imagine coachloads of Italians are going come and cheer him. Whatever happens now his Giro is a success for him and Astana, everything else is a bonus. Domenico Pozzovivo is ill. He’s complaining of breathing problems, a chest cold. He’s also a very nervous descender in the wet so we could see his fortunes fade although he’s got a strong team in support. All of this brings us to Nairo Quintana. He will attack: the question is where and when. He said yesterday his move on Montecampione was timed deliberately late. He’s riding in a patient style, happy to take seconds here and there. But he is minutes down and his team will be working out the VAM numbers and calculating how from the stage finish he will have to attack in order to extract time on the others.

Team Prize
OPQS lead with Ag2r La Mondiale in second place. One aspect behind the tactical uncertainty of this race is that no team is able to shape the race in the mountains. Ag2r have had their moments but that’s it, a moment rather than tempo all climb long. Instead riders are reduced to lone actions or even temporary alliances and its one reason why the final week will be so fascinating to watch.

Weather Forecast
The race director Mauro Vegni is studying weather charts right now. Tomorrow’s stage could be altered because the forecast suggests snow at altitude. Currently the Passo Gavia and Passo Stelvio are clear, open and ridable although very cold with temperatures around the freezing point. But this could change tomorrow morning and the Giro is studying an alternative route. An announcement is expected at 5.30pm local time. A few flakes are fine but if the roads get icy they’ll use an alternative route.

This is what happened last year with the stage profile above rustled up as a replacement. However there was so much snow that even the alternative was out of the question and the stage was cancelled. Looking at the forecasts that won’t happen and at pixel time – 3.49pm – the latest is that the race is planning to go ahead as planned but with a back-up in place should the facts change tomorrow. Aru and Pantani
Of all the places to win, Montecampione has meant the Italian press has gone to town with Fabio Aru. He’s front page in La Gazzetta Dello Sport and headlines make allusions to his triumph and Marco Pantani’s success in 1998. He might not be comfortable with that.

Aru Power Numbers
As well as all sorts of intel on Fabio Aru’s life – lives in Bergamo, likes is mum’s lamb chops, goes to church some Sundays, ex-cyclocrosser – La Gazzetta also has information on his SRM power stats from the climb to Montecampione from Astana team coach Paolo Slongo:

Slongo says Aru can improve in several ways. There’s upper body weight loss and also improvement in pacing, witness how he started too fast in the time trial and faded last week.

Australia Down
This time last week I was listening to the Cycling Central podcast laughing at how Canberra alone was having a better Giro than all of Italy. Fortunes have reversed somewhat with Evans dumped out of the maglia rosa and Orica-Greenedge reduced to just three riders. Things change quickly. But the team has had a great race and it’s still astonishing that they’re riding around with the Greenedge name is really code for “Your-Name-Here” for a co-sponsor.

La Grote Start 2016
The 2016 Giro will start in the Netherlands. The precise location is yet to be determined. As is the start of the 2015 Giro which remains a mystery.

Non Giro News
The US Pro Championships are on this weekend. There’s a rule that says all national championships in the northern hemisphere are supposed be held on the “mandatory date” of the last weekend of June. Those that don’t occur on this set date are not eligible for UCI points meaning US riders who win this weekend forgo 40 UCI points, the equivalent of two stage wins in the Tour de France or sixth place in a monument classic.