The Amstel Gold Race is a race of repetition. Repeat enough small climbs and you get a total vertical gain close to an Alpine stage of the Tour de France. The Cauberg is climbed repeatedly. And today Philippe Gilbert repeated exactly the same move that won him the world championship road race in 2012. On the last time up the Cauberg he attacked hard on the inside of the bend, the steepest part of the climb and immediately distanced everyone else and over the top he had a tailwind to help speed him to the finish line.

The early break formed with 11 riders and some tough names. If there’s a classic where going up the road early can pay it’s the Amstel Gold Race. Given the constant climbs and descents, whether you are up the road or inside the bunch doesn’t make such a big difference to the effort. Among the fugitives was Cannondale’s Matej Mohorič who won the junior road title in 2012 on the Cauberg, now back for 250km.

Road safety
Another argument to go up the road is accident prevention. All that street furniture is designed to make the roads safer but not when a bunch is trying to squeeze past at 60km/h. Joaquim Rodriguez crashed out early proving his lucky hotel has lost its charm. Other accidents took out Dan Martin, Niki Sorensen, Jurgen Van den Broeck, Andy Schleck and Geraint Thomas among others.

Repeat episode
TV viewers could have felt they were watching a repeat. For a long time there was no action, just scenes of a bunch chasing a breakaway, almost an animated GIF on a loop: a tidy village, a sharp corner, a steep climb, a short descent to another tidy village. But like watching a series for the second time you begin to pick out the details. A bunch chasing? Yes but look how tight the bunch is, riders were under pressure to fight for their place from a long way out and as much as it looked procedural on TV it was stressful inside the bunch.

Voeckler Show
Thomas Voeckler took off with 39km to go taking several riders with him including Greg Van Avermaet, Jacob Fuglsang, Zdeněk Štybar, Pieter Weening. Voeckler stood out, his body moving in many directions as he tried to make his bike go forward. If he played tennis he’d surely grunt with ever stroke.

The Voeckler counter-attack was confused, a collection of riders each out for themselves but while thinking of their team. Contradictory? Not at all, they didn’t want to ride too hard in the break and many could play the team card, the “I’ve got my team leader waiting in the bunch” gambit.

Up ahead and the Keutenberg thinned the early break to two riders: Ag2r’s Christophe Riblon and Topsport Vlaanderen-Baloise’s Preben Van Hecke. A moment to celebrate the Topsport team, they might not win much but they animate many a race.

Riblon and Van Hecke led the penultimate time up the Cauberg but all the narrow climbs were gone and so their escape bid looked doomed. Behind the Voeckler group still looked hesitant and over the top Greg Van Avermaet and Jacob Fuglsang took off just as the group was about to be caught. It looked futile in the sense that neither was going to win but it was a good tactical ploy as it forced others to chase, Omega Pharma-Quick Step and Garmin-Sharp notably. Van Avermaet again animated a race and with hindsight it was perfect for Gilbert but maybe he can use the rest period to take up poker, chess or another tactical game where you learn to let your opponents reveal their hand before you make your move.

Round to the Bemelerberg and Fuglsang and GVA caught the Riblon-Van Hecke tandem was caught, almost 240km in the break for them. Katusha fired off Dani Moreno but the climb wasn’t steep enough and if he scorched across to lead four with Jan Bakelants and Tom Dumoulin in pursuit, he was left without much more to do, the open plateau with with its spinning windmill left him looking like Don Quixote. He’s looking ready for the Flèche Wallonne.

So it came to the Cauberg as the bunch sped into Valkenburg, the pitch of the TV camera moto’s engine getting higher and higher as the bunch, led by OPQS’s Michał Gołaś, were spinning out their gears. Up the Cauberg and a red jersey went on the right, it was BMC’s Samuel Sanchez. He was chased by Simon Gerrand and Alejandro Valverde. Then on the other side of the road Gilbert reached for his best hits album and pounced. 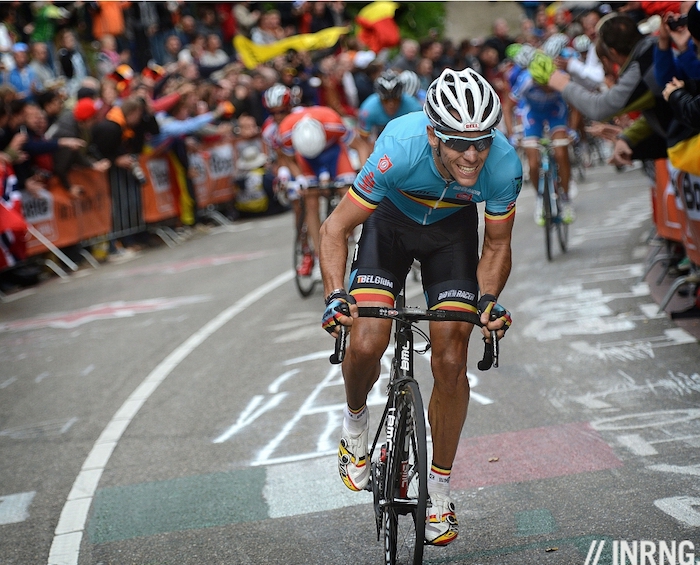 Taking the steepest line while Gerrans, Valverde and Michał Kwiatkowski were initially over on the other side of the road Gilbert got an instant gap, surfing the sweetspot between his raw power and the momentum needed to ride away. Flags waved by the crowds signalled a big tailwind and over the top Gilbert was away and started to increase his advantage. It looked laboured and less fluent than in 2012 but apparently his time over the Cauberg and to the finish was faster:

With reports of 7km/h tailwind Gilbert big ringed the Cauberg, averaged @ 33 km/h on the climb. Broke his his own record from 2012 Worlds

With one kilometre to go Gilbert had nine seconds. Kwiatkowski tried to follow but for the chasers this was a glass-half-empty scenario: to pull Gilbert back was unlikely and if they tried, they’d tow someone else to the line and probably fall off the podium. Still Jelle Vanendert plucked up some Dutch courage and took off to claim second place with the ever-reliable Simon Gerrans in third place. The Verdict
A tense race which came alive at the end. Huge crowds make it a good spectator event and the TV viewer had to wait for the final 40km for the tension to pick up. Thomas Voeckler was the catalyst but his move was the only serious attack before the Cauberg, Dani Moreno’s Bemelerberg move always looked doomed. At one point it seemed a bunch sprint was possible but this was an enticing scenario given it’s so rare. But the fourth time up the Cauberg saw the race explode. Gilbert had played the waiting game and unleashed his trade mark final effort to cap a solid team effort by BMC with Van Avermaet and Samuel Sanchez setting him up for the finish.

Looking ahead to the coming week Gilbert’s in a comfortable position and Wednesday’s Flèche Wallonne offers an exciting finish where his explosivity will be tested against the climbing speed of others. One of the British journos called this week “uphill finish week” and with it comes the repetition of seeing the same riders in the mix because the demands are the same. But even that holds this week it’ll be fascinating to see how it’s done. We don’t know how bad Joaquim Rodriguez’s injuries are but he’s got a capable understudy in Moreno. If Gilbert was the best today, he saved his effort for the final 90 seconds, something that’s almost impossible for next Sunday’s Liège-Bastogne-Liège.