Luka Mezgec won yesterday but did he plan for a second stage win? Because today’s stage suits the sprinters as it speeds to Girona.

Stage 1 Wrap: an early break by Boris Vallée (Lotto-Belisol) and Romain Lemarchard (Cofidis) allowed the former to take the points jersey, the latter to take the mountains jersey. They were reeled in, caught at first by Amets Txurruka then the bunch. A few late attacks but the bunch sprint was always on the cards. The only one who didn’t get the message was the camera operator in Calella who zoomed in on the bunch as they raced to the line and managed to crop out the finish line meaning TV viewers didn’t get to see who won.

What do you do if you’re a sprinter on a team with John Degenkolb and Marcel Kittel? Simple, you win. Luka Mezgec might not get a lot of chances nor Giant-Shimano’s finest wagons to lead him out but he’s got two wins already this year and is a handy back up for the team. Some teams chose not to have sprinters because it’s not worth trying to beat the best but Giant-Shimano do the opposite, a bit like the old High Road team. Two other notes: 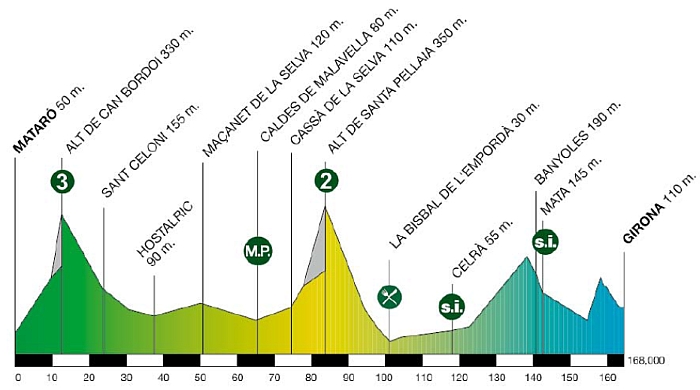 The stage looks spiky but the y-axis has been stretched so much that the 350m high climbs look big but Santa Pellaia is 5.9km at 4% average, peaking at 6%. Another sprint finish is on the cards although like yesterday the sprinters have to work for it. As we saw yesterday the climbs might not alter the race but the descents require riders to be well-placed. But that last spike before the finish is nothing of the sort, the Nacional II road is big, wide and barely requires a gear change. The finish in Girona is on the Carrer d’Emili Grahit, flat and one of the town’s biggest roads.

The Contenders: Luka Megzec and Leigh Howard (Orica-Greenedge) are the two fastest riders but there are others looking for a chance like Robert Ferrari (Lampre-Merida). Yesterday’s top-10 saw a mix of riders who aren’t pure sprinters.

Weather: warmer than Monday… but wetter. Rain is forecast with temperatures of 18°C. There’s a breeze but nothing savage.

TV: the same all week, 90 minutes starting from 3.30pm to 5.00pm Euro time. It’s on TV in Spain and Eurosport around the world but if you can’t find it on TV cyclingfans.com and steephill.tv are the go-to sites for TV schedules and feeds.

Daily Diaz: Catalonia’s limits are the Pyrenees to the north and the Mediterranean sea to the southeast. The Ebre river is sometimes considered the southwest border, but this is not very accurate. The only Spanish territories north of the Pyrenees belong to Catalonia: Aran Valley (which will be crossed by the Tour de France on July 23rd) and the exclave of Llívia. The highest peak is the Pica d’Estats (3,143 m).