The days of an easy winter are long gone for cyclists where some light riding and the odd bit of cross-training was enough to last you through January. Today Carlos Betancur’s extra kilos are the exception rather than the norm. If anything some pushing too hard in their winter training. Those returning from Australia to Europe get a climate shock from the cold that lasts for days, just as getting used to the heat was a problem on arrival.

Some do ski during the winter. Ag2r’s Romain Bardet is one although he might regret it as one outing he returned to his car to find it smashed and two bikes inside had been taken.
Boot on the other foot: Talking of skiing several cross-country skiers and biathletes are being busted for doping ahead of the Sotchi Olympics. As someone who tunes into some other sports once every four years at the Olympics, the skiing has often related to cycling with its reliance on aerobic fitness coupled with some technical skills… and a massive doping problem. Is it worth watching if this is the case? An interesting question because skiers and many more have been asking the same about cycling only now it’s reversed. 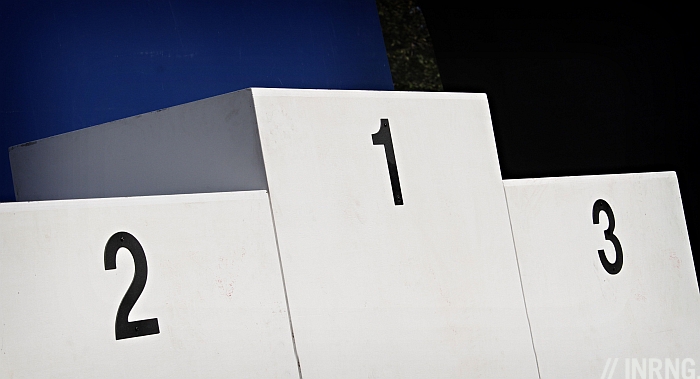 Time to be pedantic. Many competitors in Sotchi will be aiming for a podium place. But in cycling there’s a strict definition: it’s the first three riders in a one day race or the overall in the stage race. But a third place on a stage during a stage race technically isn’t a podium finish.

Hinault Film: In case you’re wondering the photo at the top shows Joop Zoetemelk with Aad van der Hoek, Gerrie Knetemann, Bernard Hinault and Gerben Karstens posing in 1979. Fast forward to 1986 and Hinault’s career was starting to slide. You might have read the book “Slaying the Badger” about the Tour de France that year and his battle with Greg LeMond. There’s now a film based on the book’s story in production.

Team Sky fascinate many and if  you like bike tech too then give the “Cycle Systems Academy Podcast” a try. It’s the renamed Velocast podcast and bike mechanic Sean Lally flies out to Majorca to meet the team. In some ways pro teams don’t have the best bikes because they’re usually on stock factory bikes rather than anything exotic. Still worth noting that Sky use threaded bottom brackets with rather than the more prevalent push-fit systems (edit: corrected, see comments below for more). There’s also the extra details for example the way every staff member has a uniform to wear. Some other squads have branded clothing but not everyone wear it all the time.

White bar tape
Talking of fashion and bike mechanics FDJ will ride with white bar tape all year, even Francis Mourey in his cyclocross races. It looks clean but there’s a romantic reason as well. At the team presentation team manager Marc Madiot said because when he was younger “all the champions had white bar tape”. Now he’s running his own team he wants the same. Now you know.

New Velodrome
Combining France with Sky now the French federation will unveil it’s new HQ outside Paris on Thursday. It’s got a 250 metre velodrome and models the British system of an HQ next to a track. Other nations do the same, the Swiss federation moved to a new HQ next to a track. But the French are still hoping to ape the British more with a national pro team that covers road cycling but also the track and more. This plan has been floating around for sometime but mentioned again by François Pervis after a meeting with the federation boss, as recounted in an interview with the Radiovelo podcast.

European Race Season Starts
The European road race starts this weekend. Only you would not know it as the media are so quiet. The GP La Marseillaise opens the season in France and there’s the GP Costa degli Etruschi in Italy. Tracking down info is hard, there’s a website for the Italian race but the French event doesn’t seem to have one despite belonging to La Marseillaise… a newspaper. If a media company can’t promote its own race, who will?