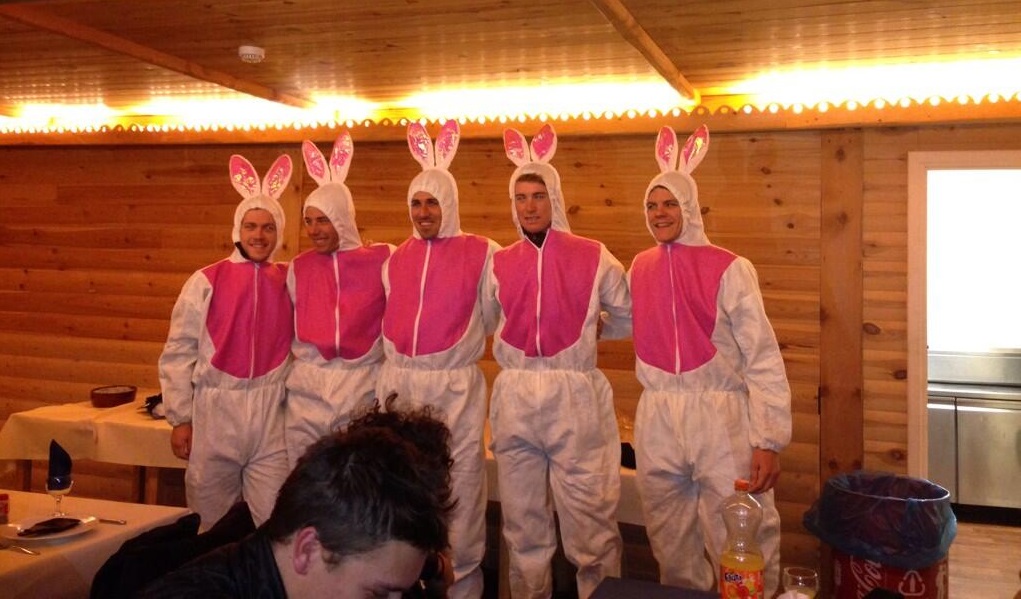 That’s Trek Factory Racing’s new recruits putting the camp into their team’s pre-season training camp. You might think they’ve stolen Andy Schleck’s pyjamas but, no, this is an initiation ceremony, a scene normally kept secret but inevitably public thanks to smartphones and social media.

It’s back to work for most pro cyclists as the off-season’s over. Several teams are holding training camps with a variety of activities with the emphasis on team building more than fitness.

The years go by but old habits stay. Cannondale might have some novelties but they’re almost certain to pose for photos on the Passo Stelvio as the team did under its Liquigas label at the Passo San Pellegrino. Ag2r La Mondiale have just wrapped up a week in the Alps enjoying the snow with XC ski sessions and more. There’s no riding but some outdoor exercise and the emphasis on bonding and team work or cohésion as they call it.

Some teams forbid riders from skiing because of the risk of injury. I seem to recall Sylvain Chavanel was forbidden from riding his motorbike for the same reasons by OPQS. The same team are blocking Mark Cavendish from track racing and citing safety reasons too but it seems Cavendish is after qualifying points in track races and team manager Pat Lefevere wants road race wins. Handily the team put out images of their 2014 kit yesterday to distract from any dispute between manager and star rider.

For all the talk of fresh air activities like skiing or Trek’s tug-of-war there is plenty of admin too. As Garmin-Sharp new recruit Phil Gaimon wrote, there are sessions with the sponsors. Riders are ambassadors for the brands and they have briefing sessions on the products they’re paid to promote. Imagine a Garmin pro who can’t use their new computer properly and you see why they need a classroom explainer.

Rite of passage
The photo at the top is what the French call bizutage, some call it hazing but it’s an initiation ceremony. It’s from a rider’s twitter account but seems to have vanished from the social network.

Quite what was happening isn’t clear. But when when a wolf joins a pack I gather it must lower its head, bow and subject itself. This is the same thing that’s found from tribes to teams. Only the rites and practices can vary. Generally they’re petty humiliations so everyone can have a laugh, think being made to run around the block butt-naked and the slowest participant has to do another lap of shame. I gather newcomers at the Ag2r camp had to stand on the dinner table and sing a song. The point is to get everyone laughing and bonding. The advent of smartphones means photos leak out.

All together
There is one unique aspect: everyone is in the same place. FDJ’s influential team coach Fred Grappe gave a good interview with French website cyclismactu where he sets out the role of the pre-season camp in his typical methodical style:

“The camps, according to the the time of year, are completely different. Those in winter are the only ones where we have practically all the team’s riders because there are no races and they are available. The first camp includes a large proportion of admin with some “training” tagged on. In December it’s 70% admin and 30% training… …The pre-season camps are an essential ritual for the riders to ride together, to meet up, to know the coaches, the support staff… …Later in the year we can put in place specific mini-camps with particular riders in defined places, in the mountains for example. But it’s only in December that we see everyone together.”

As Grappe suggests, a team is almost never together in one place. Once the racing starts riders and staff are split up. Take the Tour de France where only nine riders will be together from a squad that could include 30 riders. And if the Tour can require more mechanics and soigneurs, many are sitting at home or doing the Tour of Austria.

Finally it is also a chance to plan for the future. Riders and management will discuss target races and goals for the upcoming season, laying down plans for the season ahead. Once a leader marks a target then other riders can be allocated to the task. For example OPQS are one team but there’s Mark Cavendish and his sprint train which overlaps with Tom Boonen and his classics crew and then a band of lighter riders around Rigoberto Uran.

Summary
There are 60 days until the World Tour begins and it is back to work for most pro teams. Training matters but the pre-season camps are often more about admin and bonding rather than riding and training.