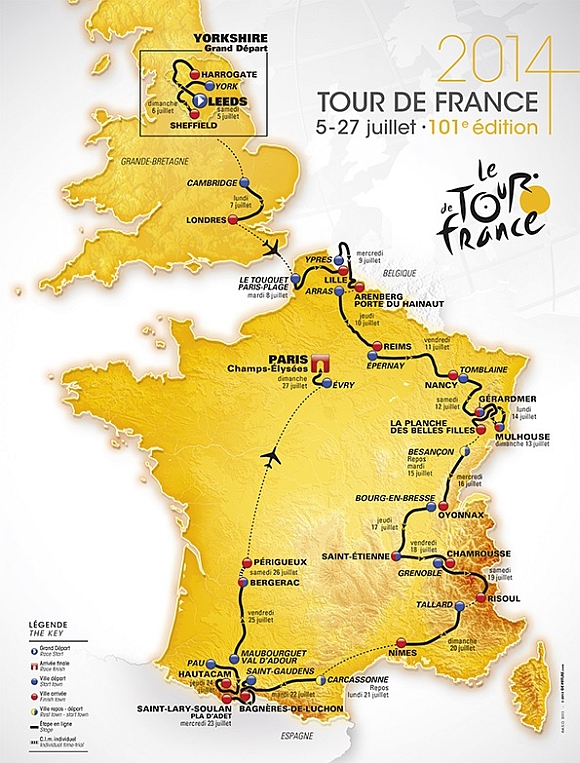 It’s official we can see the map for real, watch the excellent video montages and crucially learn more about the roads between the start and finish towns.

The grand départ had long been announced and with Thomas Vergouwen’s detective work had mapped out much of the route already. You wonder why ASO don’t try to get ahead of this and make a media event of releasing a few select stage details in the months prior.

Le Big Start
The British start had been known for some time, three stages that should suit the sprinters but the opening weekend contains some hills and tricky roads lined by stone walls, one mistake and some won’t even make it to France. The crowd will be a big factor, many came out in 2007 for the London start, even more for the 2012 Olympic road race.

Cobbled and Crashes
Back to France and the rest of the opening week looks set to suit the sprinters too but with the infamous pavé from Paris-Roubaix but that’s the point, the pavé don’t belong to Paris-Roubaix, they are part of Le Nord and the Tour has the right to visit too. Stage 5 to Arenberg is similar to 2010 when the cobbles shook up the overall classification and in hindsight gave Andy Schleck most of his winning margin over the now-vanished Denis Menchov… and where Fränk Schleck crashed out. 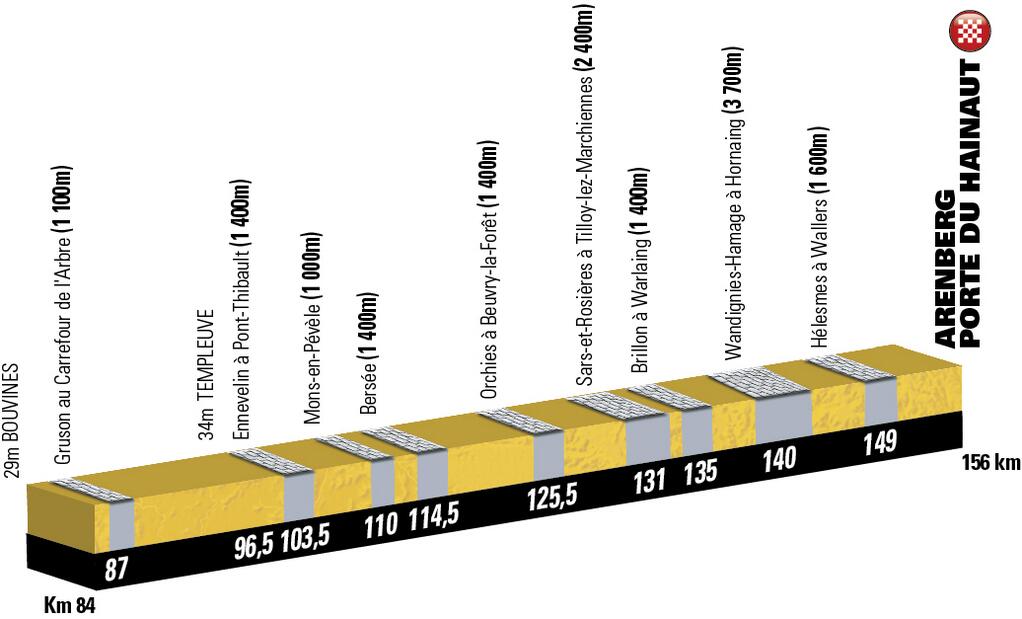 Only this time there are more cobbles including the Carrefour de l’Arbre and Mons-en-Pévèle sections although in part and avoiding some fo the most brutal components. With the narrow roads in Britain and pavé, the first week will be even more stressful than usual with the fear of crashes.

Memorial
The opening week will look further back, a war memorial theme given the 100th anniversary of the outbreak of the 1914-1918 war. The race will pass along the front line of many battles from the last century. Getting the balance right will matter as the Tour is a summer festival rather than a solemn procession. But it’s part of the Tour’s heritage, year after year the race founder Henri Desgrange defiantly sent the race to the German border with the symbolic passage over the Ballon d’Alsace.

En Vosges
It’s back to the Ballon d’Alsace, it’s now firmly in France since borders were redrawn after the war. All changes as the race reaches the Vosges mountains for a three day weekend. 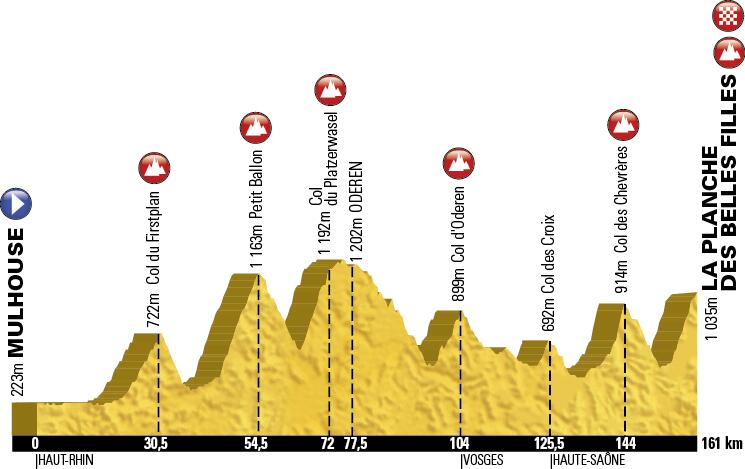 A rest day awaits and then the race heads south via Oyonnax and St Etienne, two post-industrial towns that could do with some of the Tour’s summery cheer.

One night in the Alps
A rest day and then the second week sees the race head towards the Alps but only for a short visit. Friday visits Chamrousse, a ski station at the end of the Belledone range.

The Col de Palaquit is new for the Tour and it’s steep and irregular, the kind of Alpine climb ideal to split things up a bit before the descent which is back on familiar roads off the Col de Porte. There are two roads to Chamrousse and it looks like they’re taking the harder one. It’s steep with 10% sections at the start before easing although still hard work. A summit finish but it steadies out. 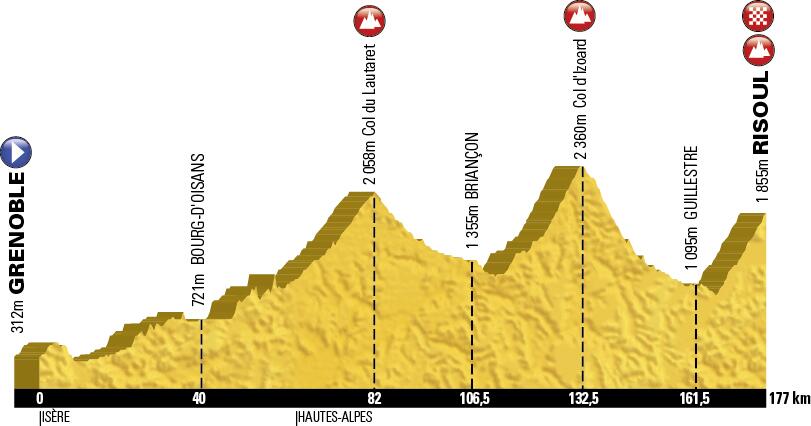 Next up we get the stage Risoul. It’s new to the Tour but comes after the classic climbs of the Lautaret and the Izoard. Risoul has been used before in the Dauphiné and other races. It’s regulière with a wide road and predictable gradients but steep in places. Want a clue? Nairo Quintana won two stages of the Tour de l’Avenir when it finished here in 2010. And that’s it for the Alps.

The Pyrenees
Two transition stages rush the race to the Pyrenees and avoid the often windy coastline. Three stages in the Pyrenees await. Stage 16 takes the race over two climbs to finish in Bagnères-de-Luchon, the longest stage of the race at 237km. Then comes a pair of mountain stages with summit finishes, interestingly each are very short. 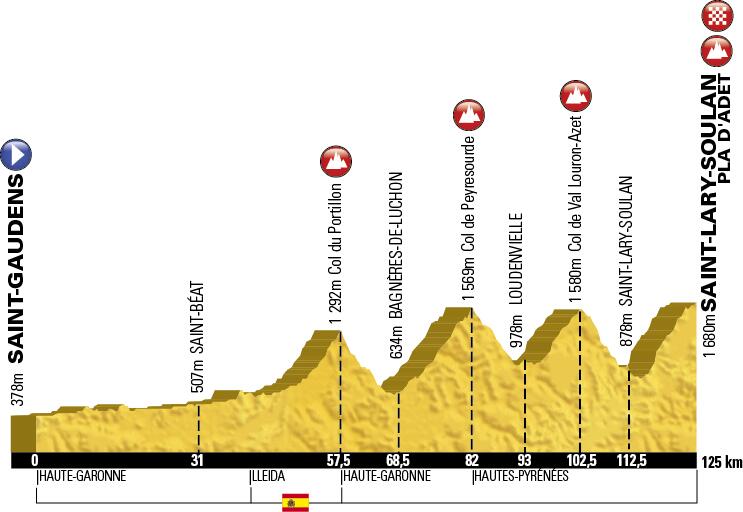 Final Time Trial
Stage 20 brings the only time trial so you wonder if the likes of Tony Martin and Fabian Cancellara will haul themselves around France for three weeks just for this. You have to go back to 1953 for the last time the Tour had just one time trial. At 54km it’s long but it still means the 2014 Tour will have the shortest amount of time trial kilometres in living memory. Bergerac to Périgueux is a nice place to visit, with rolling terrain past fields of sunflowers and tobacco.

All that’s left is the Champs Elysées, a classic finish in the afternoon that we’ll have to get used to after last year’s nocturne.

Who will win?
It’s over 250 days until the race starts so the crystal ball is a bit cloudy. But what can stop Chris Froome? The cobbles might scare him but he’s got a strong team to pace him and from then on the summit finishes and final time trial will suit him. Nairo Quintana gets better every year and if the final time trial is less to his advantage, he can’t hope for more given it’s in the final week and the 2014 race has the fewest amount of kilometres since 1930-something if you add up the total TT count of prologues, team time trials and solo TTs.

We’ll also see Vincenzo Nibali in action, he targeted the Giro this year and now has the Tour in his sights for 2014. Crunch time for Alberto Contador, perhaps he’ll need to get some early season success to prove a point before July? Rui Costa will be of interest too, you know him for his one day wins but he’s won the Tour de Suisse twice on the trot.

Tactically the Vosges could be interesting, the kind of terrain where it’s harder for a team to control a bunch. But that’s up to the riders. We got excited in 2009 with a stage from Vittel to Colmar only for the main GC riders to huddle together all today. The same for the Pyrenees, the short distances are reminiscent of the high speed stage to the Semnoz.

Tour de France 101 Verdict
The five summit finishes outweigh the long time trial but there’s more to it than this. A British start and the war memorial theme will be different and surviving the first week intact will be an achievement, the pavé are controversial, imagine if it rains.

The Vosges offer a fun introduction to the mountains. The summit finishes vary, the Planche des Belles Filles is short and of the two Alpine finishes, Risoul should be more selective but it’s still a big wide road. Note the absence of big name climbs. No Alpe d’Huez or Galibier, although the race crosses the Col d’Izoard as the high point and there’s the dependable Tourmalet. The Pyrenees start with a long stage but finish with two mountain concentrates which will be great to watch from start to finish.

You can pick out several sprint finishes already and Peter Sagan will find more competition from the pure sprinters this time although to his advantage the points could be diluted amongst Mark Cavendish, André Greipel, Marcel Kittel and more leaving the Slovak with a good chance.

As ever the best thing with the Tour is its enormity, the daily soap opera of stories and subplots so as much as we can project from today’s presentation, who knows what July will bring?

Previous post: One Year On from the USADA Verdict