Much of the route has been known thanks to official promotion by RCS and leaked details. But today’s presentation is the chance to supply all the details because if we knew the start and finish towns for a stage, now we know which mountain passes will come between them. It’s also the chance to present the race as a whole and present a theme.

The 2014 theme of the presentation was “a more humane Giro” meaning fewer long transfers. Look closely at the map above and you’ll see one day’s stage finish is not far from the next day’s stage start. Similarly the stages are shorter, gone are the 240km Alpine raids of the final week with more vertical gain than Everest, instead a typical mountain stage is “just” 170km. Human yes, but probably more energetic too with faster finishes.

But for all the talk of themes things don’t always go to plan. The 2013 Giro was billed as an international race with the presence of Bradley Wiggins and others only for the Brit to reacquaint himself with his feminine side on the descents, although he put it more bluntly. Gesink and Hesjedal also left the race and with Nibali, an Italian won. The surprise guest was Jack Frost’s Italian cousin as snow and rain fell for weeks despite the official theme song for the race of Mezza estate or midsummer.

Another theme was Marco Pantani, several stages in the race are remakes of Il Pirata’s greatest hits as the race revisits his greatest victories. Pantani’s enduring legacy is probably something for long thesis. Yes he excited millions in Italy but now they know he was on drugs, both performance enhancing and later narcotics before his sordid death. But it speaks to nostalgia that grips Italian cycling, where the heroes of the past are rightly venerated but there’s a firm sense that the past was better than the present. So we end up looking forward to a race in 2014 that will be looking back to 1999.

Note that the Tour de France will have a memorial theme linked to the 1914-1918 war but Italy went to war in 1915, an obvious theme for 2015. That said Stage 6 climbs to Montecassino, scene of a large battle in 1944 and the race will reference this.

Where The Race Will Be Won
In the mountains. As ever the riders make the race but obvious strategic points await. Stage 5 sees the first uphill finish but there are some obvious tactical points and that cliché of a “decisive third week”. Here’s the stage by stage take: 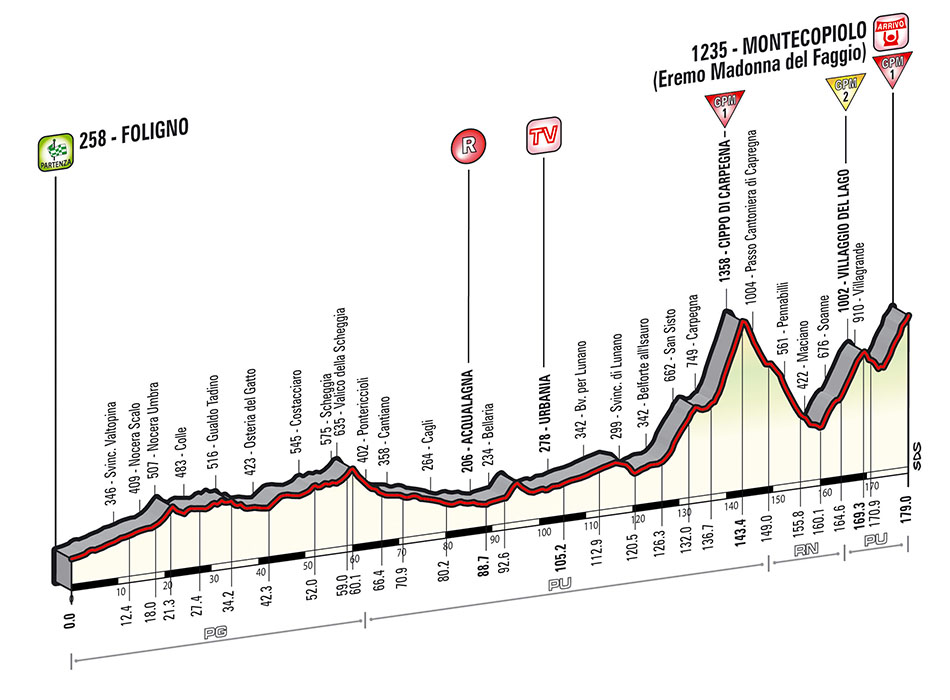 Stages 8: the first of two mountain stages in the under-rated Apennines, this 174km stage climbs Monte Carpegna (7.8km at 8.3%) before 18km at 6.3% average to Montecopiolo although you can see it’s steeper than the average. The final section to the finish line is 13%. 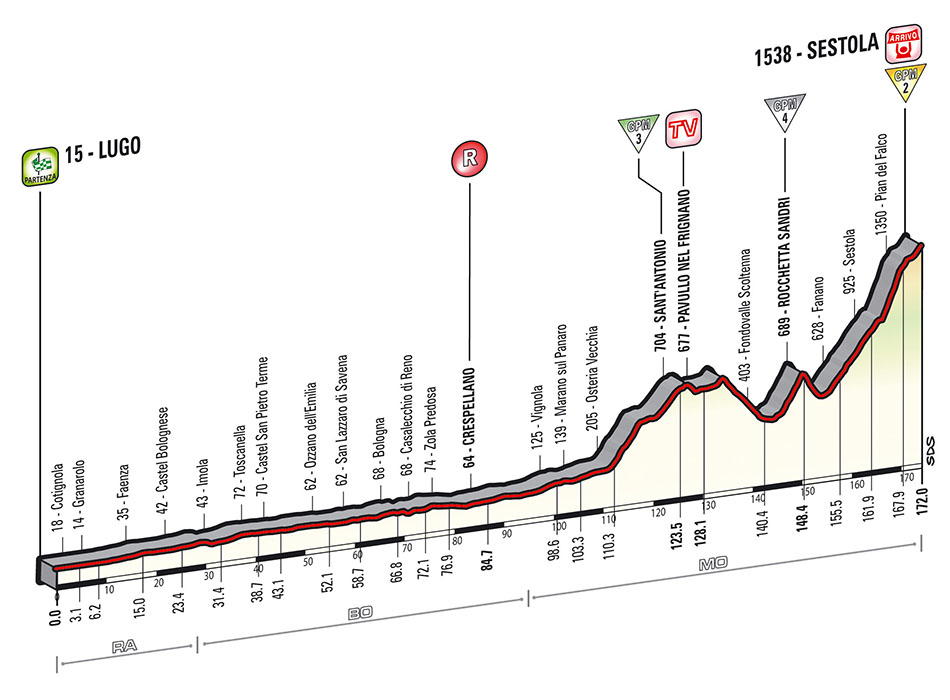 Stage 9: the weekend in the Appenines continues although here they have a totally flat start before climbing. The finish on the Passo del Lupo above Sestola is 10.7km at 6% but again with many steeper sections. 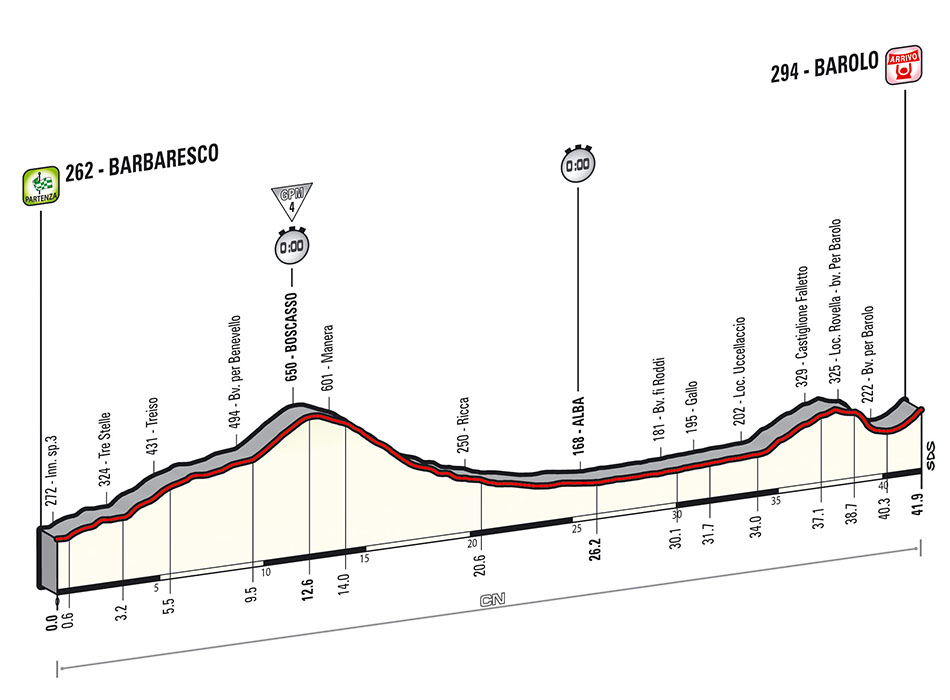 Stage 12: the 46km Barbaresco to Barolo time trial is crucial, on rolling roads to suit powerful riders as they barrel along wide roads past precious vineyards. The media will adore this stage thanks to the press room buffet alone. 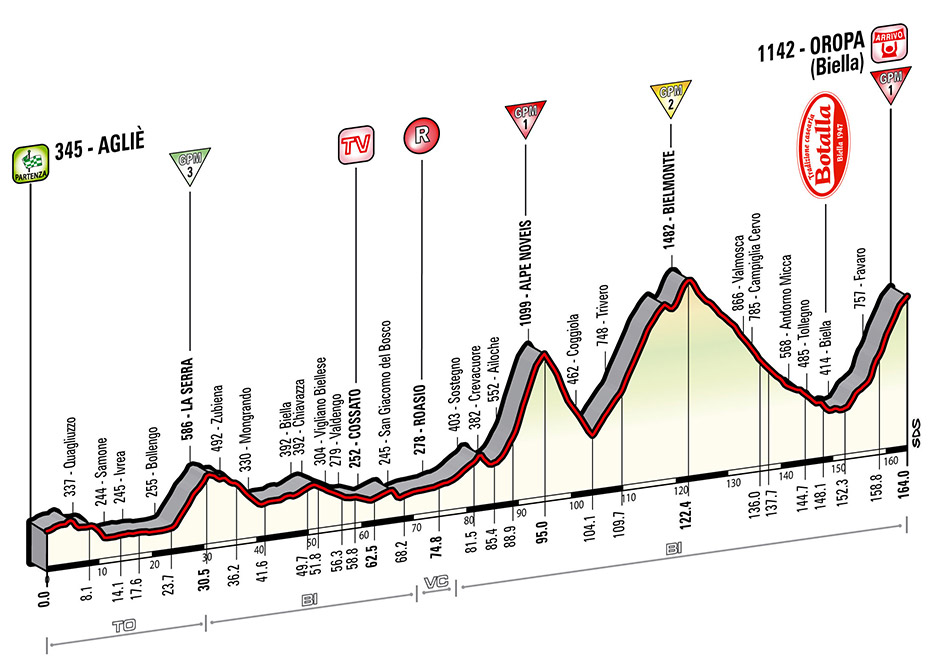 Stages 14: the Alpe Noveis is 8.9km at 7.9% before the steep Bielmonte and the finish to Oropa and its sanctuary but there’s no rest for the riders as the face 11km at 6.2%. 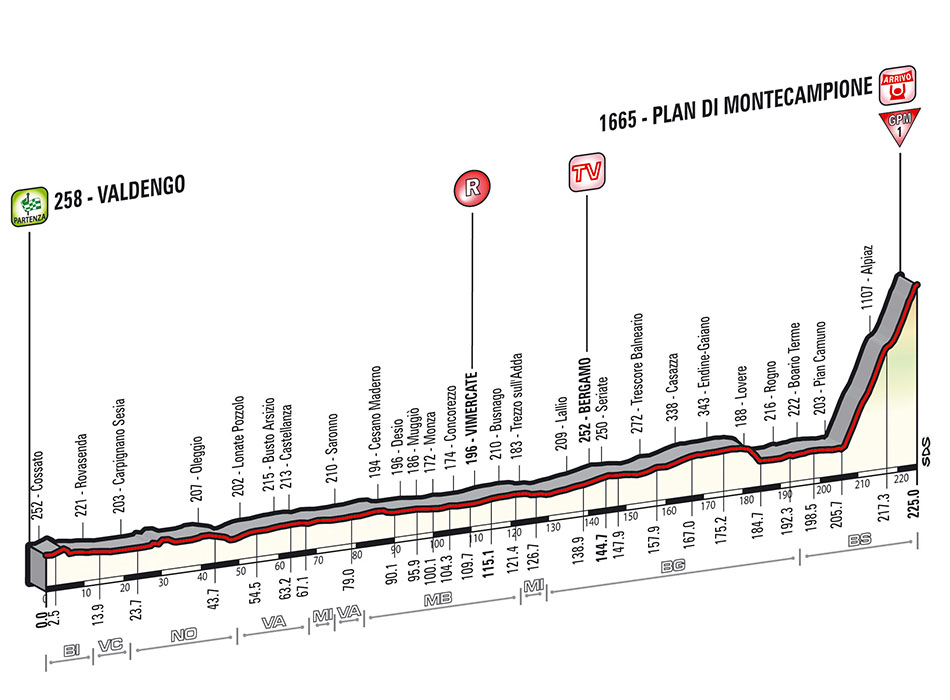 Stage 16: just 139km but the first five star mountain stage with a long summit finish at Val Martello but before the Passo Gavia and the Passo di Stelvio which is the 2014 Cima Coppi too. This is identical to Stage 19 of this year’s race that was cancelled because of the snow. 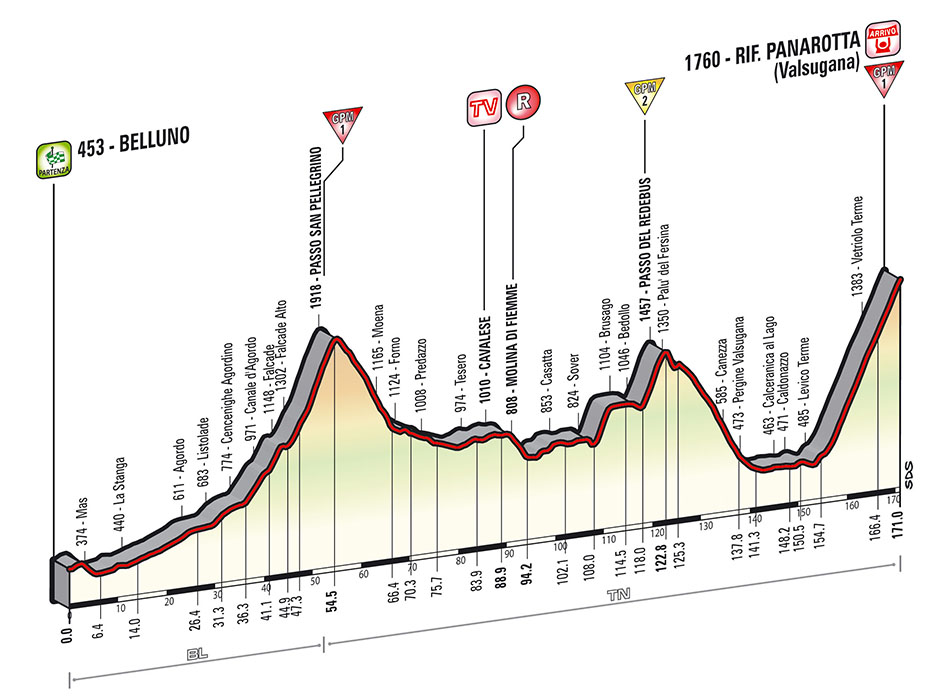 Stage 18: a big day over the hard Passo San Pelegrino, the new Passo del Redebus before the climb to the Rifugio Panarotta, 16km at 8%. 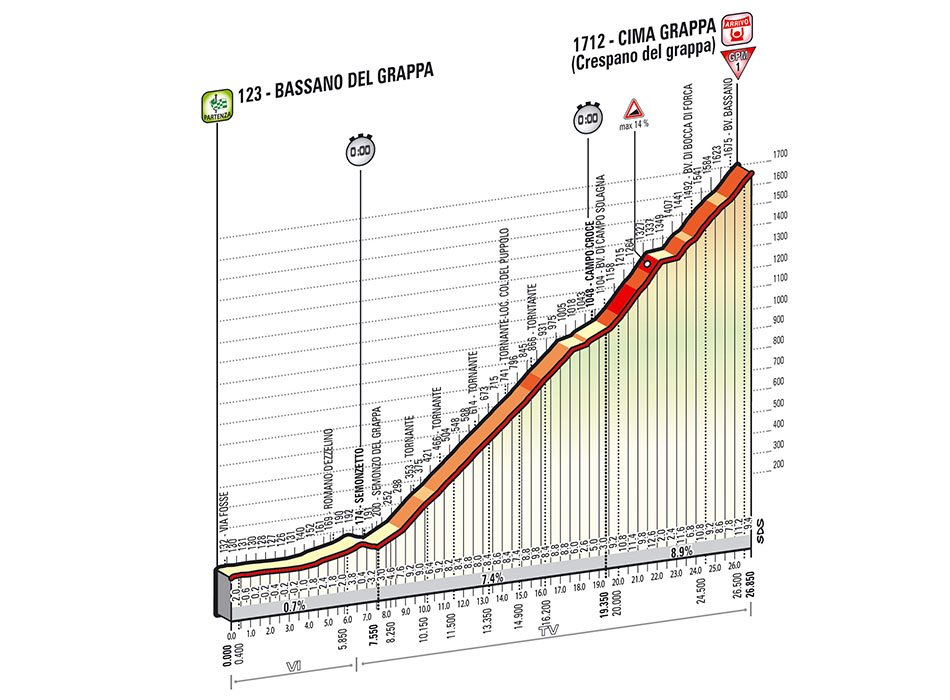 Stage 19: the Bassano to Monte Grappa time trial is a well known route, it gets used every year for an open event and the record is just over an hour. It’s a tough climb and remember the mountain TT in this year’s Giro allowed Nibali to put 58 seconds into the second placed rider Samuel Sanchez and he was close to catching podium finisher Cadel Evans. In other words, Monte Grappa could allow for even bigger time gaps 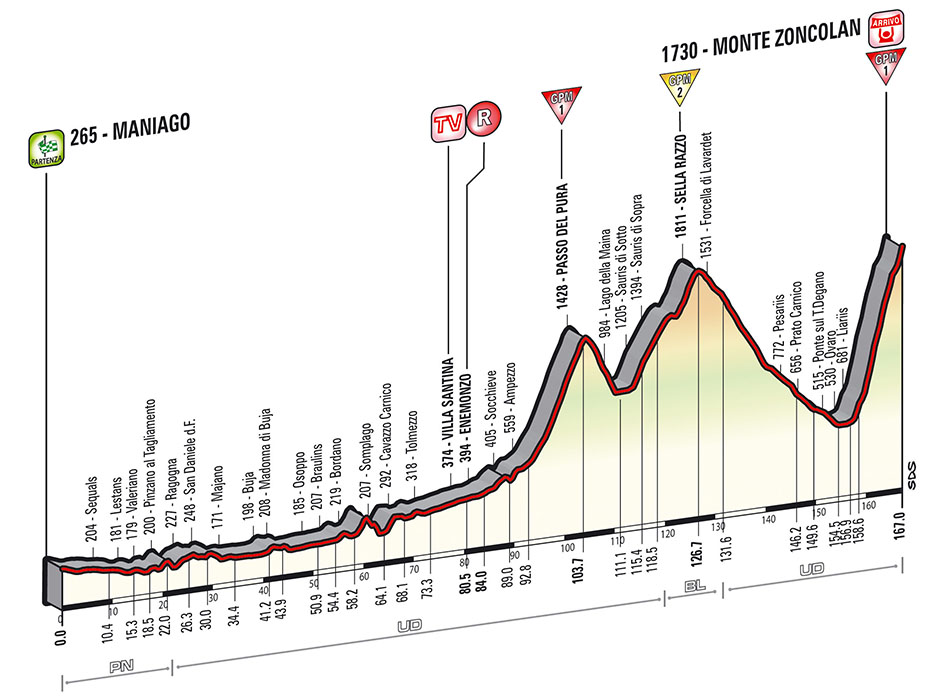 Stage 20: the Passo del Pura and the Sella Razzo on the way to Monte Zoncolan. This is the last day to win the race. It’s hard and infamous with 10km at 12% and at times 20% sections. But it’s almost too hard because its steep slopes cancel any tactical interplay, the climb becomes a private contest against gravity where each performance is the expression of a power/weight ratio.

The Contenders
Inviting foreign contenders brought plenty of foreign interest but the Giro-Tour double looks a tough call. So before we even think who could win the race we need to know who will ride. This is not easy because many riders and teams have their minds on the off-season and besides, the Tour de France route has yet to be officially unveiled. It seems probable that Vincenzo Nibali will target the Tour next year. It made the presentation awkward at times as riders heaped praise on the race but then got shy about actually showing up.

Sky’s Richie Porte wants to lead his team into the Giro, he’s been solid in 2013 but it’s another thing to aim for a grand tour. Compatriot Cadel Evans said today he’s “almost 100% certain” to ride; the same for Ivan Basso. OPQS’s new recruit Rigoberto Uran is another candidate to move up. Nicolas Roche welcomed the Irish start but will the steep climbs of Italy be too much? Movistar had a great Giro this year but the Spaniards don’t have much sponsor interest in Italy – even more since they’re losing Pinarello – and will surely keep Nairo Quintana fresh for the Tour.

Climbers vs The Rest
The Barolo time trial is long at 46km but the climbers should find ample compensation during the race, especially the final week, especially as the Giro awards time bonuses. Could this tempt Joaquim Rodriguez back? The high number of summit finishes means it’s a race skewed towards the climbers or all-rounders in the mould of Nibali or Alberto Contador.

But one of the best things about the Giro is the daily variety and the 2014 route offers plenty of chances for breakaways to get away, there is plenty of space in-between the ambition of the sprinters and the GC contenders.

Wildcards
There are four spaces but one is reserved for the winner of the Coppa Italia, currently led by Androni Giocatolli. Assume they get an automatic invite and Bardiani-CSF are the other obvious pick. The Vini Fantini team is applying for a licence under a temporary name of “Yellow Fluo” and the squad’s future is yet to be determined and they brought the race into disgrace with Danilo di Luca and Mauro Santambrogio. But the Giro needs Italian wildcard invitations to liven up the race.

Colombia did reasonably well but their best riders have been poached by other teams. NetApp-Endura could ride but with Europcar applying for the World Tour, the German0-Californian squad could find the door is open for a ride in the Tour instead. MTN-Qhubeka have been wooing RCS and a ride seems likely but again July is possible given Cofidis and IAM will get invites but the next two picks are not so obvious once we go beyond NetApp-Endura and MTN-Qhubeka.