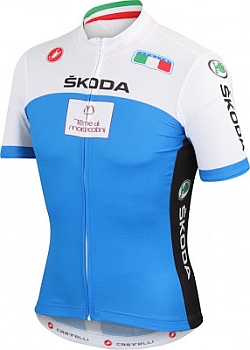 Here’s the new Italian jersey for the worlds by Castelli. The marketing says it’s faster than a standard jersey, a 20W survey at 40km/h. But if the Italian tricolore flag is green, white and red why do the Italians wear blue?

It all goes back to the royal family. Italy is a republic today but over the years the Dukes of Savoy built up a kingdom that eventually included all of the Italian peninsula until a referendum in 1946 opted for a republic. The ruling family had used light blue, or azure, on their emblems and heraldry and to this day Italian athletes representing their republic turn out in the blue tones of the old monarchy. This is why those on the national team are called azzurri, the “light blues”.

The biggest pro cycling sponsor?
You’ll spot the Škoda logo on the jersey too. The Czech car manufacturer started as a bicycle repair workshop and today is part of the Volkswagen Group. The Škoda brand is everywhere in cycling, they provide the race vehicles for many races and sponsor many races, for example the are the sponsor for Tour de France’s white jersey. Christian Prudhomme’s car in the Tour de France even had a Czech numberplate. The more you look, the more you find Škoda. 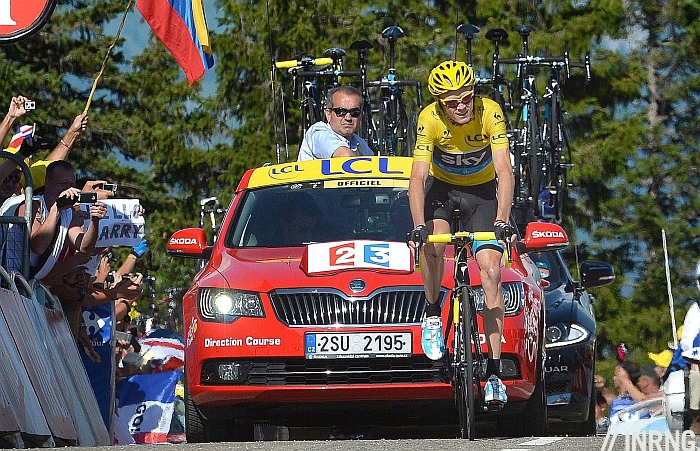 Worlds on TV
Watching the Italian jersey and its logo on TV is another matter. The UCI has nominated sports marketing Infront Media to handle sales of the broadcast rights for the World Championships. Remember the UCI owns the worlds and the road world championships is the UCI’s single largest source of income and TV rights account for a lot of this, along with the hosting fee. Website SportsProMedia.com has more on the deal and which channels will be broadcasting the race.

McQuaid vs Cookson
The fight goes on but things seemed to have calmed down since last week’s bizarre collection of press releases. Last Sunday saw Pat McQuaid and Brian Cookson give 15 minute presentations to the European Cycling Union (UEC), an umbrella group for Euro federations and then a vote was cast to determine who the UEC would back for President. 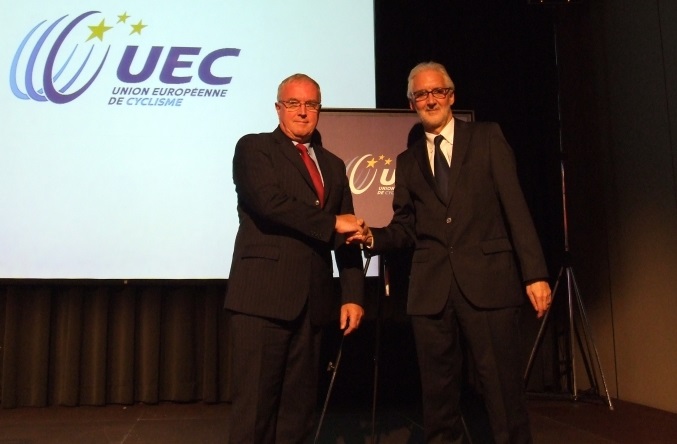 The result was a foregone conclusion with Cookson winning. It’s a humiliation for the incumbent President not to get nomination from the largest federations in the sport but it was expected so it doesn’t change much. The UEC was behind Brian Cookson from the start and the delegates voted 27-10 to support Cookson which suggests McQuaid still has residual support. Listening to the HumansInvent.com podcast (I’d link but Episode 6 isn’t up on the site), Richard Moore briefly noted that McQuaid believed he had strong support in Europe. This sounds hard to believe but if it’s true then McQuaid’s boasts of support in Africa and Asia could fall flat. But even if the 14 UEC delegates are now mandated to vote for the Briton, it’s a secret ballot and so even the assured Euro votes are not certain. The vote takes place in one week.

Tour of Britain vs World Championships
Bradley Wiggins leads the Tour of Britain and the race is due to finish in London on Sunday. But Sunday is also the start of the world championships in Florence with the team time trial. Wiggins will surely want to win his home tour but it means he can’t ride for Team Sky on Sunday. Wiggins is obviously a very strong time triallist but he’s also reputed to be excellent in the team time trial, in part thanks to his team pursuit background. Apparently Alex Dowsett has special permission to leave the British tour so he can help Movistar on Sunday.

It’s another example of unfortunate calendar clashes. The team time trial is an odd event at the worlds with pro teams rather than nations and if the sport’s top-ranked team can’t bring their biggest rider because he’s leading another race then it’s something that needs to be addressed for the 2014 season.

A Classic Tour de France?
The Tour de France route is usually known 18 months in advance although sometimes competing towns in a region can wait until the last minute before the October presentation to get picked. One story this week says there will be a time trial between Bergerac and Périgueux on the last Saturday of the race. The quickest route between these towns is just under 50km meaning a classic final time trial to settle the GC.

With massive interest in the race and the internet it’s possible to hunt for snippets in the regional press detailing possible stage starts and finishes and then a few phone calls to likely hotels can help determine the date for the race because when the Tour comes to town it has to accommodate thousands of people from riders to team staff to race officials and the media. This detective work is mastered by Thomas Vergouwen and his Velowire blog.

Finally some bike tech prompted by the tweet above. Shimano and Campagnolo both offer electronic shifting but curiously come with prodigious battery capacity. Now it’s great you can shift gears for months without having to charge up the bike but this seems unnecessary given they’re fitted to high end bikes that need to be cleaned, lubed, checked and tweaked every week; even if you are the laziest of home mechanics then charging the bike once a week is not too taxing. Perhaps it’s psychological, the battery is so big in order to reassure consumers that it won’t go flat during a ride. Sure this is no auto battery, the weight is already low at around 60g from Shimano’s internal BTR2 but 130g for Campagnolo’s external pack. Yet many riders are weight-concious when it comes to components and happily spend a lot to save grams. I wonder if we’ll see “performance” batteries that contain a half the charge and half the weight?