Having a Fine Time on the Tour 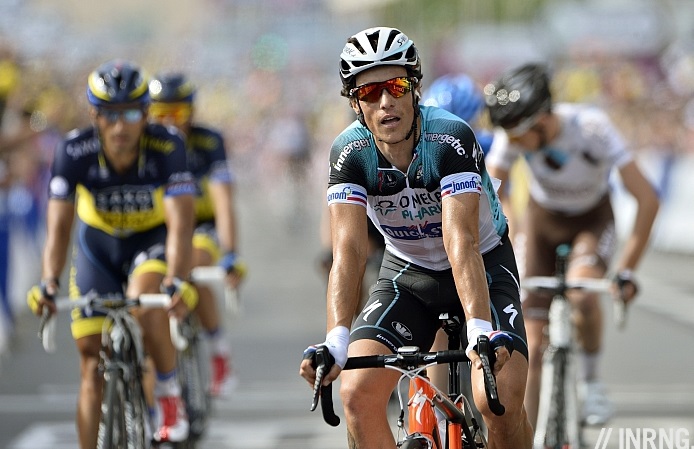 Every evening the Tour publishes an official bulletin with the results and other technical information including a note of who was fined during the day with the crimes and punishments listed.

Chavanel presumably he didn’t order red wine with fish nor chew with his mouth open. Instead it’s more likely he was caught taking a “sticky bottle” because his OPQS team DS Wilfried Peeters was also fined 100 francs. But it’s a perfect example  of the kind of fine levied:

A sticky bottle?
This is the practice where a rider gets a waterbottle from the team car and as the team manager passes it up, the rider holds on – as if it’s sticky – whilst the car accelerates to give the rider an illegal boost. A bidon collé is one of the few terms to be mentioned out loud in the evening dispatches but often the fines are a collection of polite euphemisms. “Inappropriate conduct in public” might sound wide-ranging but it almost always means a rider urinating in public. Each stage is so long that riders have to stop for a leak but picking the right place is not easy given the large crowds.

Franc-speaking
The race is French but the rules of the sport are set by the UCI and so are the fines. The UCI is based in Switzerland and therefore it collects money in Swiss Francs (CHF). One thing to note in the aftermath of the Ted King abdication is that the race itself isn’t behind the decision, instead there’s a jury of UCI commissaires tasked with upholding the rules. This year’s jury is presided by Spain’s Vicente Tortajada Villarroya.

Grid
Fortunately there’s a list of offences and fixed tariffs. The other day Tony Martin was fined CHF 2,000 for having world champion logos on his time trial bike. He might be the reigning world time trial champion but the UCI has trademarked the rainbow stripes and is increasingly active in guarding this, at least at big races. Note the sum was equal to the fine for Orica-Greenedge’s finish line gate crash.

You can find the full list buried in the rules section of the UCI website and it includes gems like “Theft of food, drink or any other goods during the race” which brings a CHF1,000 fine. Interestingly “carrying a glass object” brings a CHF50 penalty, righly so because if you crash it could be dangerous. But try to get rid of it and “discarding a glass object” brings a CHF100 fine and elimination from the race. Perhaps there’s an exemption if you put the glass in a recycling bin?

There are plenty more offences, going from the big ones like violence or dangerous riding down to the more daily mistakes of ignoring a commissaire’s instructions, sticky bottles and so on.

The Price to Pay
It might sound petty but surely the sport needs rules and a system to enforce them? The trouble here is that the fines are light and given the regularity with which they’re levied, seem to have little deterrent effect.

In practice Teams tend to account for these by netting them off against prize money and have a month to pay the fine, it’s all admin with no little consequence on the rider. It’s also a matter of being caught. Commissaires travel in red Skoda cars and on motorbikes too but they can’t be everywhere. So only those who get caught get fined and plenty more can go on each day.

Appeals can be brought but only for incidents where the fine exceeds CHF200. It’s not all cash either, riders can get hit with points losses for the green jersey competition and time penalties too, for example if they draft behind a team car.

Big Money
Should you think all this is trivial, the UCI’s annual report for 2011 – the last set of published figures – show it raised a total of CHF546,000 in fines, a sum equivalent to €450,000 or $575,000 although this includes anti-doping fines, and the actual amount raised from race fines is one third of the funds raised. But not all the money goes to the UCI, some penalties are paid to the national federation of the race in question (in the Tour, the French cycling federation) and in other cases to the licence holder’s national federation; but the others go to the UCI.

In context this sum is about 3% of the UCI’s annual income, a sum not to be dismissed at given its so-far failed attempts to raise money with new ventures like Chinese race promotion.