It’s that time of year when the UCI publishes its accounts for the past year after approval at the UCI’s annual congress. Now we can see what happened during 2011 and if accounting is boring, often the money isn’t.

Here’s a quick take but we will probably need to re-read the full report a few times to understand the finances in full.

The UCI accounts use the following exchange rate 1 Swiss Franc (CHF) = €0.824 = US$1.07 for its accounts meaning you can swap Swiss francs for US dollars for a quick calculation

Income Statement
Going through the main UCI accounts here are some of the items that stand out:

Pro Tour Reserve Fund
This is the fund of money controlled by the UCI but nominally managed by a committee called the Professional Cycling Council which includes some UCI-staff. This is the fund that collects money from teams when they buy a UCI Pro Team licence or when a race organiser pays money to the UCI.

Cycling Anti Doping Foundation
You can guess what this body does. It is funded by the teams, race organisers, riders and the UCI. Here’s the breakdown of the funding: 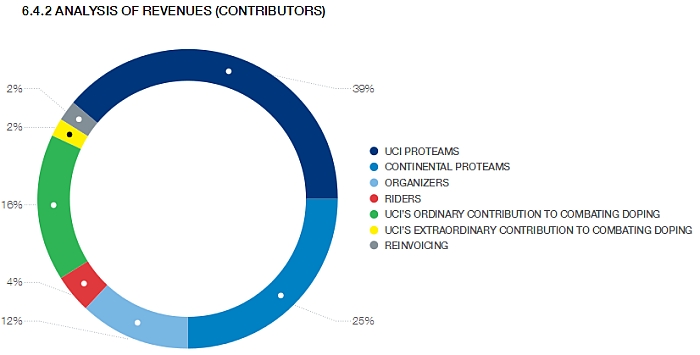 World Cycling Centre
This is the UCI headquarters with its velodrome, restaurant and more. Set up as a separate entity, it loses money but modestly.

Global Cycling Slowmotions
For the first time we get a summary set of accounts for Global Cycling Promotions, the events company created by the UCI to organise races. It is now linked to the ill-fated Tour of Hangzhou but in 2011 only the Tour of Beijing counted.

We will have to see what the impact of the cancellation of the Tour of Hangzhou is but it is legitimate to fear yet more losses.

Conclusion
A quick look upon publication shows slightly stronger results for the UCI in 2011, building on 2010 which was also mildly profitable. But we probably need to go over the accounts with a finer comb to double-check some of the items because as fellow blogger FMK explained last year, things aren’t always as they seem with the UCI accounts.

GCP remains a big concern. Events like the Tour of Beijing mean more money flowing into the UCI coffers but the business was still draining money from the Pro Tour Reserve fund for a third year in a row; if it wasn’t for the soft funding from the Pro Tour, GCP would be in a perilous state. GCP is only in balance after taking money from the teams who, if given a vote, probably would not vote for this.

The outlook for the UCI looks better especially as the settlement from the 2012 London Olympics should provide even greater income. Also because the UCI’s bio-passport is now an established anti-doping tool thanks to case law, and thus not a potential legal liability that it was feared a few years ago. Another risk has diminished now that the Swiss have pegged their franc to the Euro meaning less exchange rate hassle for now. But economic woes remain a risk for the sport and shrinking TV contracts, vanishing races and struggling pro teams can all cut revenue for the UCI.

The UCI accounts use the following exchange rate 1 Swiss Franc = €0.824 = US$1.07 for its accounts meaning you can swap Swiss francs for US dollars for a quick calculation