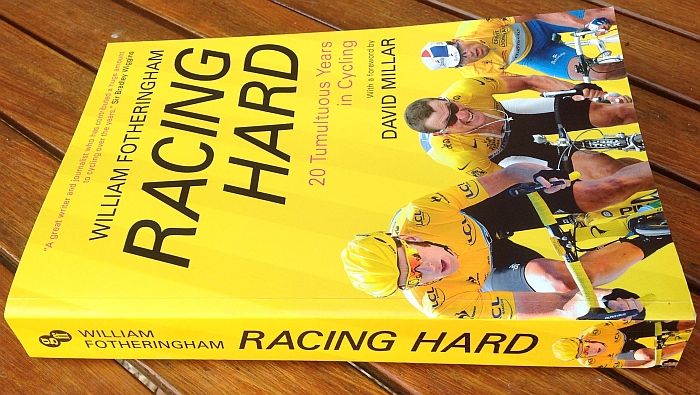 Details. If you’ve ever ridden down a road that you haven’t taken for a long time you’ll often find it takes longer than you think. the mind can miss out sections. Along the way you’ll spot things you’d forgotten about, a building, a view, a pothole. It’s the same with revisiting past events like the Festina scandal or the Athens Olympics, you can remember the big picture but the journey and its small details escape you.

William Fotheringham’s “Racing Hard” is a collection of his writing for British newspaper The Guardian and its weekend sister The Observer. Over the years he’s produced more 2,500 articles for the paper and this is a collection of the best pieces. But it’s more than a bound copy of press cuttings, pieces are grouped by theme and there’s added commentary and notes to explain context or the writer’s view at the time.

The observations are amusing. In a piece lamenting Lance Armstrong’s use of bodyguards to distance himself from the public, there’s a reference to Bernard Hinault: “a boxer’s walk” –  true but only after you think of it. It’s this level of detail that stands out. Rather than recount the Festina affair or Lance Armstrong’s Tour de France from today’s perspective, you’re taken back in time. If you know the story you have the privilege of hindsight but if not you’re taken through what happened at the time and it works both ways.

The book is in English and most of the articles are about the anglophone riders for example Chris Boardman, Lance Armstrong or Chris Hoy. Normal since a British journalist will write plenty about home riders and the Tour de France but little about Belgians or early season Italian races. So if you’re a Brit or a francophile you’ll like much of the book – French, Flemish or Italian columnists should contact a publisher – but there’s depth for wider cycling fans. The piece on on Jean-René Bernaudeau’s pro team structure with its amateur team and rider education programme is one example.

If you’re an Aussie wondering why the British track program surpassed your country, read the pieces about the early days of the British track program. After opening with tales from the Tour de France and dealing with dopage much attention is given to the rise of British cycling in recent years but of course the pieces written can only hint at the success to come. Interestingly Wiggins is interviewed in a piece about his Olympic success and his words about living in a bubble and wondering what the reaction is like back home mirror what he said at the end of the 2012 Tour de France. 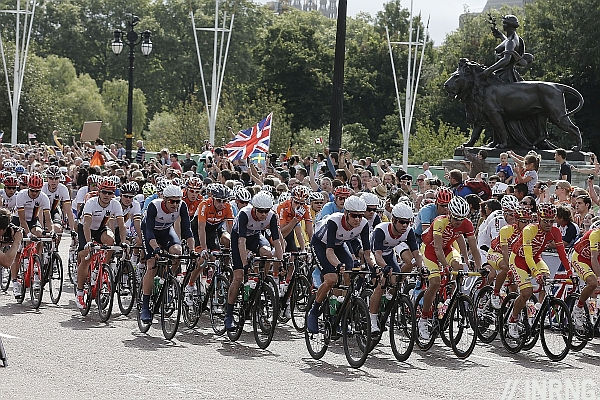 From Barcelona 1992 to London 2012, Chris Boardman to Bradley Wiggins

One observation: with the bid for the UCI President happening right now there isn’t a single mention of Brian Cookson in the book. The Presidential hopeful is linked to much of the success of British cycling today but in all the articles about the “dungeons” of the Manchester Velodrome, the coaching staff, the managers and more there’s not a single mention of Cookson in the book. Whatever his role in British cycling, and only going only by these articles, Fotheringham didn’t find much to write about him.

There’s a contrast in that the articles are written for a newspaper audience with little cycling knowledge but this book is surely assembled for the cycling fan. You’ll already know that the world champion wears rainbow stripes and the pursuit race involves two riders who each start on opposite sides of the track. Yet you’re not cleaving through dense explications to get the story, if anything you’re nodding along. That’s largely because the pieces are well-written, the text is as clipped and dried as bunch of tea leaves waiting for a Brit to boil them. Living out of a suitcase for weeks, working in hot press rooms, meeting deadlines and more don’t seem to bother Fotheringham. The prose is good and because he’s writing on the spot there are few problems of recall, you’re reading events of the day rather than a historical take.

The book ends with a series of obituaries written by Fotheringham. There’s a gear shift here of course because hindsight is everything but I enjoyed the piece on Tour patron Felix Lévitan.

Summary
This is far more than a collection of articles bound into a book. The detail allows for an enjoyable immersion in the past whilst notes added by Fotheringham allow for some hindsight and commentary. Each piece is part of a chapter on a particular topic, for example Lance Armstrong’s aggressive denial or the rise of British cycling from track to Team Sky but it’s not all about the superstars, yellow jerseys and gold medals, along the way there are scenes from rural France or the backroom staff.

You can go back and revisit past events with original source material from the time and there’s a helpful index. If you want to know what it was like to report on the Armstrong years or to read accounts of British cycling before Team Sky appeared, you should read this.