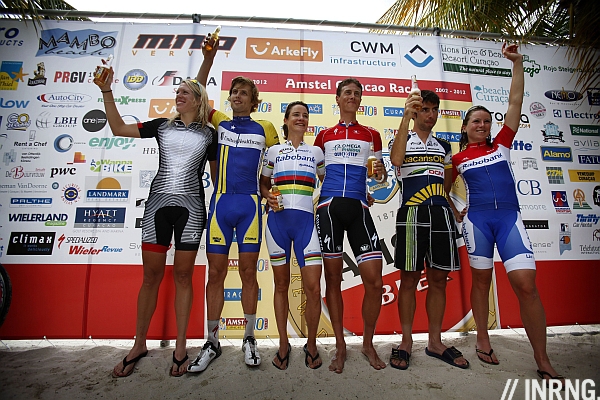 Want to ride a mountain bike race in the USA? A time trial in Britain? A criterium in Australia? A road race in France? A gran fondo in Italy? Careful because whether you’re a novice or a pro you risk being fined and suspended.

A long-standing rule has said licence holders can’t take part in unsanctioned races. Only it’s been ignored by everyone from beginners to grand tour champions. Until now.

The rule says licence holders can’t take part in unapproved events. Events have to be on the UCI calendar or that of a national federation. This site covered the topic in 2011 when USA Cycling was emailing pro licence holders to warn of trouble if they did non-sanctioned races, like a private cyclocross race or a local gran fondo. The rule is old and has always applied to every licence holder, from the lowest category to pro but it seemed only the pros were getting the emails. Here’s the rule, my emphasis:

A national federation may grant special exceptions for races or particular events run in its own country.

Note it says all licence holders, that means anyone with a licence belonging to a national federation that’s a member of the UCI. As for special exemptions, these are very rare. Remember under the UCI’s terms a licence holder isn’t someone who pins numbers to their jersey and holds a racing licence but can include a manager, a driver or a soigneur and others. But like other UCI rules it’s been abandoned and ignored by many. This is changing. 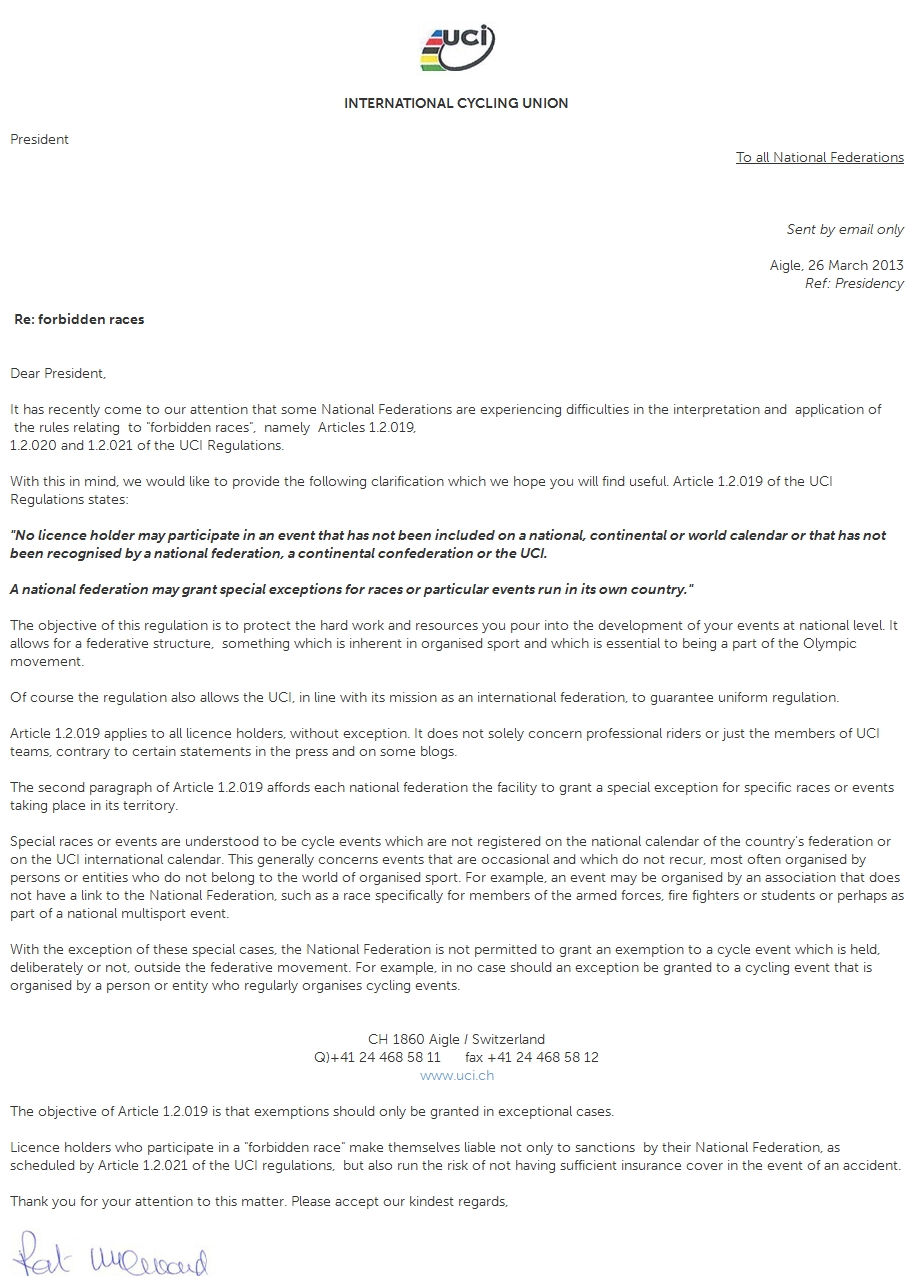 What’s new?
The UCI has moved to clarify the situation. In a email sent to all national federations, displayed above, cycling’s governing body explains the rule “applies to all license holders, without exception. It does not solely concern professional riders or just the members of UCI teams, contrary to certain statements in the press and on some blogs.” There’s a circularity here because press and blogs covered the topic back in 2011 USA Cycling was apparently emailing warnings to pros rather than all its members. Note the irony of  an email signed by Pat McQuaid who infamously got a lifetime ban from Olympic competition for riding an unsanctioned race under the apartheid regime of South Africa using a false name.

What does it mean?
For starters the rule isn’t very clear. Rule 1.2.019 sits below a title called “§3 Forbidden races” but the rule itself uses the word “event” but the term is undefined. What is a race? Is a gran fondo where riders are timed, classified and the first riders win points and stand on a podium a race? Are licence holders banned from the weekly timed rides up Alpe d’Huez in summer?

In theory it means any licence holder must avoid taking part in unsanctioned cycling events. This means some MTB races in the USA, time trials in Britain run a rival governing body called Cycling Time Trials, road races in France run on the FSGT or UFOLEP calender and some gran fondo rides in Italy are potentially off-limit too.

It’s a big deal for many. USA Cycling was the first to respond with a clarification statement that stated “this rule only pertains to those riders holding an international/UCI license,” implying most domestic riders are OK. Yet this flouts the UCI’s insistence on “all licence holders” and it’s left many people confused.

It goes all the way to the pros. Bradley Wiggins, the reigning Tour de France champion, ignored the rule in 2011. More importantly, nobody cared. Just a few months ago Tony Martin, Alberto Contador, Vincenzo Nibali and Ryder Hesjedal took part in a event in Dubai that’s not on the UAE Cycling Federation’s calendar. Sure it wasn’t a big race. But it was an “event” and it was not on any calendar, at least as far as I can tell by navigating Arabic websites. Similarly see the Amstel Curacao race, the end of season gathering in the Caribbean (pictured at the top) is a fixture… that’s apparently not on the calendar.

The rules say all these rogue riders risk suspension:

In practice the rule has existed for years but has been ignored by everyone. But now the UCI is telling federations that past indulgences are over and everyone must follow the rules. Predictably this sudden change is causing problems for some.

Why are they doing it?
Many cyclists are scratching their heads over this. But let’s look at it from the UCI’s point of view:

It’s likely the UCI sees this as a protective move that bolsters their member federations and wards off people trying to run unregulated races. Above all it’s had the rule in place for years and it’s I’m supportive of to the idea that if there is a rule it should either be enforced… or amended.

Monopoly Protection
The rule just doesn’t feel right, it’s restrictive. Just as you don’t get banned from Burger King just because you were caught in McDonalds, punishing a licence holder because they rode their bike under someone else’s rules seems pretty mean. Sure burger bars don’t make you sign up to rules but without wanting to sound like a whining teenager, we have human rights. Free association is one of these and choosing where, how and with whom you ride your bike is your choice. The idea that a governing body can sanction you for doing something out of their remit is questionable. Indeed thanks to a reader, I’ve learned there have been successful challenges to this notion. I gather that swimming’s FINA tries to federate everyone under the same rules but plays it casual with some events.

In fact far from helping the sport, these rules could be counter-productive. They put up barriers and make governing bodies look like defensive spoilsports. If you like doing mountain bike races in the US or time trials in Britain you might not bother taking out a licence because you could be punished. That means fewer members and all the negatives that flow from this. Far from co-opting members, it rejects them.

Conclusion
A governing body is only as good as its rulebook and selective enforcement creates problems. Telling federations to suddenly enforce a rule that was ignored for years is going to upset many who were happy with things the way they were.

In a way it’s good the UCI is reminding us of its rules because national federations can’t cherry-pick the rules they like. But the disruptive effect of insisting this rule is upheld risks causing headaches for races, sponsors, riders and even national federations.

The UCI might think it’s protecting its sport but the risk is that in trying to block things rather than supporting all forms of cycling the governing body looks bad. Hopefully a compromise can be found to let everyone ride and race as often as they like.