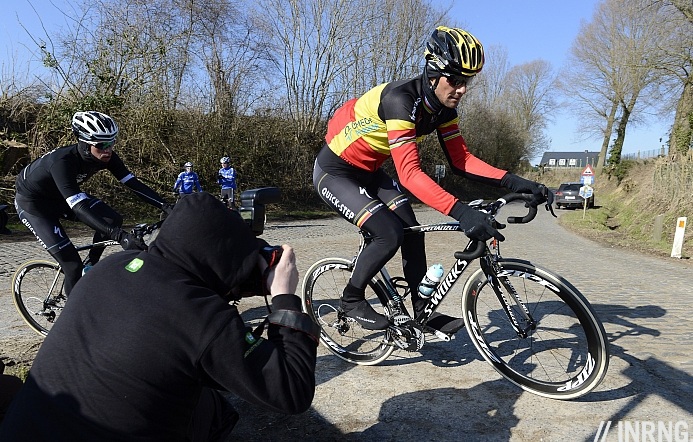 You can almost smell the beer and frieten now. This weekend sees the start of the cobbled classics. I’ll do a preview for the weekend’s double bill of the Omloop Het Nieuwsblad and Kuurne-Brussel-Kuurne but ahead of these it’s worth noting and celebrating the start of the spring classics season.

Yesterday Tom Boonen was photographed wheeling a suitcase across a car park. So what? Well that’s the point, a man with a suitcase is newsworthy because he’s a pro cyclist and the classics are starting. And when Boonen rode the course with his team mates this training session was itself a media event with photographers out to record the moment.

For me the classics season are a fourth grand tour. Just as the national tours of France, Italy and Spain might venture beyond national borders, the spring classics are mostly Belgian but include excursions into France and the Netherlands. Of course there’s no overall classification, this is not a grand tour in a literal sense. But there are flat stages, transition races and mountain stages; the Belgian Ardennes might not seem Alpine but there are as many vertical metres in Liège-Bastogne-Liège as a mountain stage of the Tour. There’s something for everyone, for the sprinter and the climber alike.

What I also like with a grand tour is that you get stories and plots. In a normal one day race the riders appear the night before, race and then go home; the same for the media. But with the spring classics season riders and journos alike base themselves in Belgium and there are stories and narratives that run and run for weeks. A new talent can emerge, another is trying to overcome injury or perhaps a team is feeling the pressure. Take last year when after the Omloop-KBK weekend the Belgian media were already raising questions about BMC. It seemed premature but with hindsight they were right. It can get excessive, for example Sep Vanmarcke’s girlfriend became public property after his win last year. But often the coverage is excellent with plenty of analysis and commentary in the press and on TV, you get a lot more than the top-10 finishers. Either way there are stories and tales that will develop and unravel over the coming weeks. And better than a formal grand tour, riders can crash out with injury but battle back to race the next week or even month. 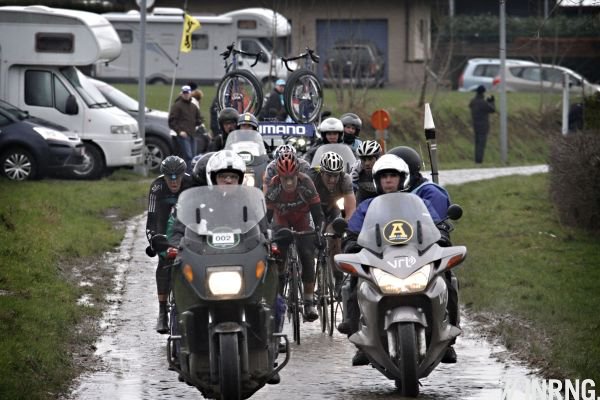 The next two months are also a celebration of Belgian cycling. No other country likes cyclesport as much – the inflight magazine to Brussels includes ads featuring pro riders. The racing is also spectator-friendly with circuits a communal event too. When there’s a race on it becomes an event, people gather, food appears and the public is often knowledgeable… when sober. Cycling allows spectators to get close to the action and competitors and sometimes the proximity is alarming, riders at peak fitness pass fans with a can of beer in one hand and a cone of fries in the other.

Of course this does not mean the whole nation is cycle-crazy but you won’t find another country in the world where the sport is celebrated as much. It’s hard to explain why the sport is so popular, perhaps success just breeds success? There are structural aspects like a rich network of clubs and many local races to support the grass roots. Geography and sociology play their part, a dense population where riding by bike was long the way to get to the field or factory.

Summary
Welcome to Belgium where even training rides are considered newsworthy. No other country celebrates racing as much. If France welcomes le Tour each July but shrugs indifferently at the sport for the rest of the year.

From now until late April is the spring classics season. The sport and its coverage goes up a level this weekend. This can be enjoyed by fans around the world but you have to visit Belgium one day to see, smell and taste it for yourself.