The Outskirts of France 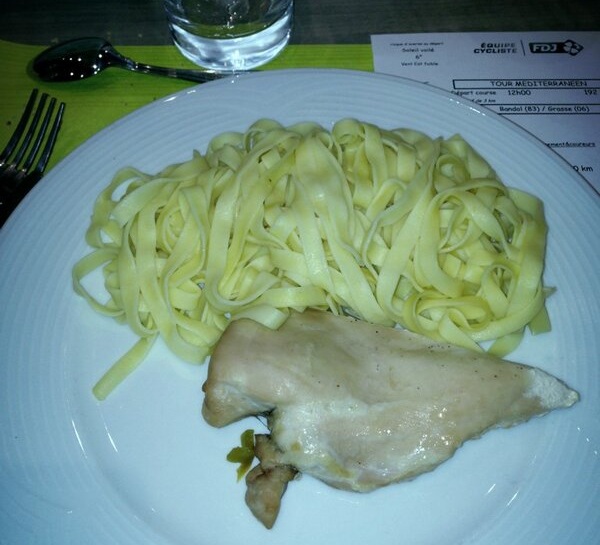 Cycling is a great way to see France, not only does the scenery change but so does the food in your plate. The Tour de France in July is the obvious highlight but the season stretches across 118 days from the GP d’Ouverture La Marseillaise in January to the Chrono des Nations in October.

But if France often prides itself on a reputation for tourism and gastronomy the pro cyclist rarely sees this side. Whilst TV images show châteaux and vineyards, the riders face concrete motels and oleaginous pasta.

The villain of the piece is the chain hotel. The names are Kyriad, Campanile, Ibis, Novotel and others but if the label varies, the experience does not. Typically these are purpose-built hotel blocks found on the outskirts of a town, often within minutes of the autoroute junction. Essentially they are all the same although with experience the riders begin to pick out the differences. For example Campanile means a slim packet of biscuits in the room.

Handy access for travelling salesmen and passing tourists looking to grab a night’s rest, these are rarely destination hotels for a stay given the offer a view of the route nationale or industrial estate. Sometimes when the cyclist wakes up and looks outside it can be impossible to determine the location as the view is of large road junction or a faceless industrial warehouse.

There’s nothing wrong with these hotels. They serve a purpose and are a reflection of economics, geography and planning laws. Most often the riders will sleep fine. But they rarely reflect anything local, it’s all part of a homogeneous corporate exercise that makes racing in France just that bit more sterile. Teams try to make things better. Several travel to races with their own mattresses to ensure riders get a familiar bed for the night.

But the hotels are told they’re hosting cyclists and given instructions to offer a repas sportif or sports meal. This means pasta but often, if not always, the kitchen struggles to get it right. France is famed for its gastronomy but in reality this butter-rich cooking is forbidden for the cyclist and besides, this is rare outside of fine restaurants. Pasta close to liquefaction is the most common serving. This needn’t be so since pasta is part of French cooking in some regions but these hotels rarely offer the local touch.

Europcar need a truck to get their cuisine française

Again teams try to fix this. Some employ a chef and try to get them to commandeer the kitchen for the night but this isn’t always possible. A few don’t just bring mattresses, they have a portable truck that acts as a catering unit. The big teams do this but tellingly Europcar does the same too with a special truck provided by Fleury Michon, a food company. There’s everything here to get good food and nutrition, from fresh ingredients to scales to weigh the portions. When even a French team thinks twice about eating in France…

Now out of town chain hotels exist in other countries. Yet France seems to have more and certainly the peloton uses them more when racing in the country. Ride the Giro and many family-run hotels feature on the route. It’s not all bad these chain hotels offer some sanitation, the guarantee of hot water and normally Wifi too. All these things matter.

Five Star Advertising
Riders in the Tour of Oman are probably enjoying the best hotel of the year. Both the Tour of Qatar and the Tour of Oman use luxury five-star hotels and riders get to return to the same room each night. But that is half the point, the Oman race exists largely exists to promote the country as a tourist destination and riders seem only too happy to tweet about the comfortable rooms or big dinners. Exactly what the organisers want.

Comparisons
There’s something egalitarian about the millionaire cyclists lodging in these motels, proof that the sport is not exclusive and big egos are rare. But still, these cyclists are the world’s best. The Tour de France can put riders in a 2 star hotel but imagine the FIFA World Cup doing this? Imagine an international convention for, say, surgeons or astronomers and they’d probably pick better places although of course they’d chose a host town or city where this was available.

Should there be a minimum standard?
Still things have improved. It’s not long ago that the Tour de France was putting the peloton in a school for the night on makeshift army folding beds and hot water was a luxury. The accommodation has to be covered by the race promoter so it’s hard to impose extra costs on the smaller races. A few times a year a team will flee their designated hotel to seek refuge somewhere else. If anything it’s not the hotel but the food that really gets to riders and this is hard to control before.

Alternatives
Teams have to stay where the race has booked them for the night but if you’re travelling, look for hotels in towns or checkout the chambres d’hôtes. Away from cities you’ll find good alternatives for low prices.

Summary
France is famous as a tourist destination and for its gastronomy. But the uniformity of these hotels means you can travel the country yet wake up in the same bed. As for fine food the closest most racing cyclists get to the Michelin Guide is when their motel is located on the same out of town retail park as a tire fitter like Speedy or Norauto. After a hard day of racing, the recovery matters. A cheap hotel is fine for a night but poorly cooked food can really get to the riders. This isn’t the story of money as it costs nothing to check the cooking instructions on a box of pasta.

Races like the Tour de France try to mix the quality of hotels and dining but even the world’s biggest race uses some of France’s most plain hotels. If you want to see France, don’t race.

Just as these hotels all look the same… so do the articles. I’d started the piece above on Sunday only to find journalist, writer and rider Guillaume Prébois saying the same thing today in French and it’s worth viewing his piece just for the photos.