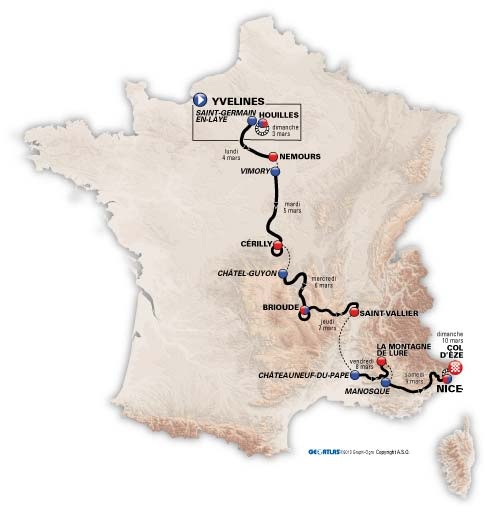 The route of the 2013 Paris-Nice race has been unveiled and it’s a classic affair with the now regular start in the Yveslines area to the west of Paris and the traditional final Col d’Eze time trial. Along the way the Montagne de Lure summit finish stands out, this the sister mountain of Mont Ventoux.

But as exciting as the course can be, this year’s edition risks being light on star riders with rival Italian race Tirreno-Adriatico attracting all the best riders. Plus since we’re looking at French cycling there’s a nod to a new spat between the French and the UCI plus a look at yesterday’s wild ideas for national teams in the Tour de France.

A classic fare with a 3km prologue to start. We have sprint stages with Stage 2 offering the final 4km in one unbroken straight section of road. Stage 4 sees the hills arrive with a lumpy finish at the end to reward baroudeurs and give us some clues ahead of the classics. Stage 5 – more below – features a proper summit finish before the race reaches the normally sunny Côte d’Azur and a tough 220km stage on the Saturday. Like last year there’s the final time trial on the Col d’Eze to seal the race. 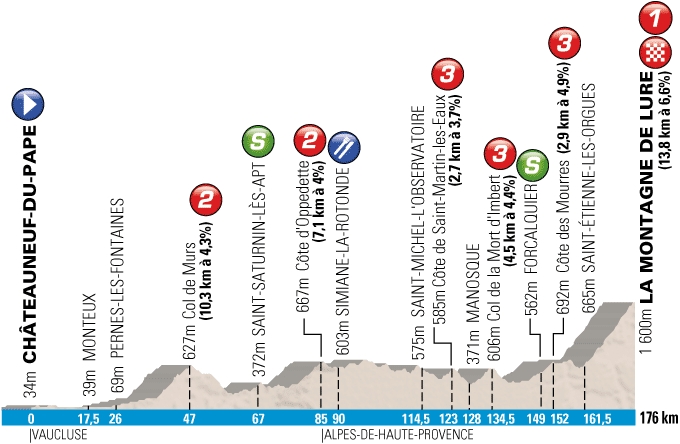 This is the smaller sister of Mont Ventoux. You might not have heard of it but it’s featured in Paris-Nice before with a stage finish in 2009 won by Alberto Contador. It’s over 13km at 6.6% making it easier than Mont Ventoux but that’s normal given this is coming in mid-March. Like Ventoux the peak, the Signal de Lure, is topped by communications equipment and has a small ski station but everything is on a smaller scale.

I’ve often questioned why we get two clashing World Tour races because it divides the following, whether the attendant media or the TV coverage and these two competing events make the case study. As Spanish website Biciclismo wrote the other day if the clash is a boxing match then Tirreno-Adriatico wins the 2013 edition by a knock-out because they list Alberto Contador, Chris Froome, Cadel Evans, Joaquim Rodríguez, Samuel Sánchez, Andy Schleck and Vincenzo Nibali for the Italian overall and Peter Sagan, Fabian Cancellara and Bauke Mollema along with Mark Cavendish, André Greipel and Matthew Goss for more action. Meanwhole Paris-Nice has Philippe Gilbert, Robert Gesink, Ivan Basso, Thomas de Gendt, Tejay van Garderen, Lieuwe Westra, Rui Costa, Mikel Nieve and Jakob Fuglsang amongst others. Biciclismo’s right but the final test is seeing how the racing works outs and last year we saw RCS dismayed by the mass abandons of riders during the race.

Easier said than done
If the clash is awkward, resolving it is not. Many riders want a stage race in their legs before the classics season. Both races appear in the slot before Milan-Sanremo. You can’t run either of them earlier because they’d be too far from the classics season but you’d also get even colder weather and potential mountain stages would be closed or just something for ambitious riders to avoid. But moving either race later in the calendar won’t help either as they’d start to clash with the classics.

Third Option
Team Sky have said their classics team won’t be racing in either of these races, preferring instead to train and simulate racing in sunnier climes. They have a point, no cold weather or crap hotels means better training. But this is being presented as some kind of innovation when it’s more a refinement on what others have done before.

Teams
Talking of teams, Sky will still be there – they have to ride – and remember it’s the World Tour 18 plus Cofidis, Sojasun, Europcar and IAM Cycling.

And on the same subject and since we’re looking at French cycling yesterday the President of the French Cycling Federation said he was interested in a return to national teams at the Tour de France. It’s got him some attention which helps raise his profile as he considers running for the head of the UCI but it’s probably bad publicity. All the major pro teams live for the Tour de France and without the publicity in July the sponsors would care little the rest of the season. It might be fun imagining different nations, for example France, Spain, Britain, the Netherlands, the USA and Australia could all field good teams but small nations would suffer, take Slovakia which only has four pros with the Velits and Sagan brothers. We should note the national aspect of some teams, for example the crossover between Sky and British Cycling or Orica-Greenedge and Australia. It’s a fun subject for a café conversation and surely not a serious idea?

Acronym War, Part Deux
If the UCI vs WADA and USADA has got you confused, try ASO and AFLD vs the UCI. A report by RMC says the French anti-doping agency the AFLD is pushing for the right to conduct the anti-doping tests in the race instead of the UCI. Cycling’s governing body handles all the controls for World Tour races but we have a turf war again as the French want to regain control of testing for their event. This almost stopped the race in the past and we’ve seen threats in 2007, 2008 and 2010 but the race goes on.

Conclusion
The season is taking shape. Wiggins started his run at the Tour de France with success in Paris-Nice and both this race and Tirreno-Adriatico feature big climbs and selective time trials making them the first test for grand tour candidates.

The 2013 Paris-Nice has all the ingredients in terms of history and route but seems to lack some star names. Still, it’s one to look forward to, especially because of the extensive TV coverage.