What Next For Katusha? 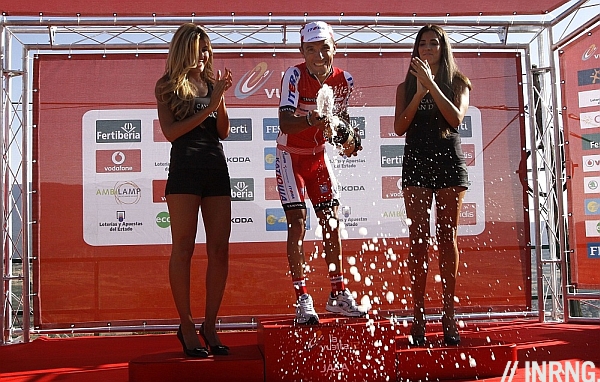 Katusha had a great end to 2012 with success for much of the Vuelta and Rodriguez’s win in Il Lombardia which crowned him was the World No.1 rider in the UCI rankings whilst the team finished an impressive second overall in the same rankings. Only now the taste of champagne has gone and instead the UCI’s thrown a bucket of ice cold water over the team and its plans for 2013.

Monday’s news that Katusha have been refused a spot in the UCI World Tour for 2013 took everyone by surprise. Even the team management was confused, imagine what riders and sponsors must think? But the Russian team wasn’t dazed for long. Within 24 hours the lawyers were on the case and a public relations campaign has started too.

What are the options for the team? Can it get back in or is it out of the sport for good. What about the riders, will they stay with a team without a licence? If we can’t predict the future we can explore the scenarios and check the rules.

First a quick summary of how the licence is awarded. A team has to meet four criteria: sporting, ethical, admin and financial to satisfy the UCI’s Licence Commission. You probably know these by now but the Licence Commission itself is worth a mention because if it is part of the UCI it is run at arm’s length. It’s run by Paolo Franz, Hans Hoehener, André Hurter and Pierre Zappelli – all Swiss. These are not small time bureaucrats, Zappelli is a judge and member of the Switzerland’s Supreme Court whilst Hurter is the boss of a Swiss energy and water utility. They are tasked with reviewing all the applications and the idea is to keep them away from the other parts of the UCI so that the Licence Commission can be neutral. Does it work? Who knows but the point to note is that the Licence Commission is not President McQuaid and his pals. The Licence Commmission then works with Ernst and Young, a firm of accountants, to review the documents submitted, especially the financial ones.

Also note this is not a passive process. The UCI called Katusha to a hearing and I gather team staff had been busy working with the UCI to get the documents ready. In other words a team is guided through the process with dialogue, as opposed to submitting a bid and hoping all goes well. 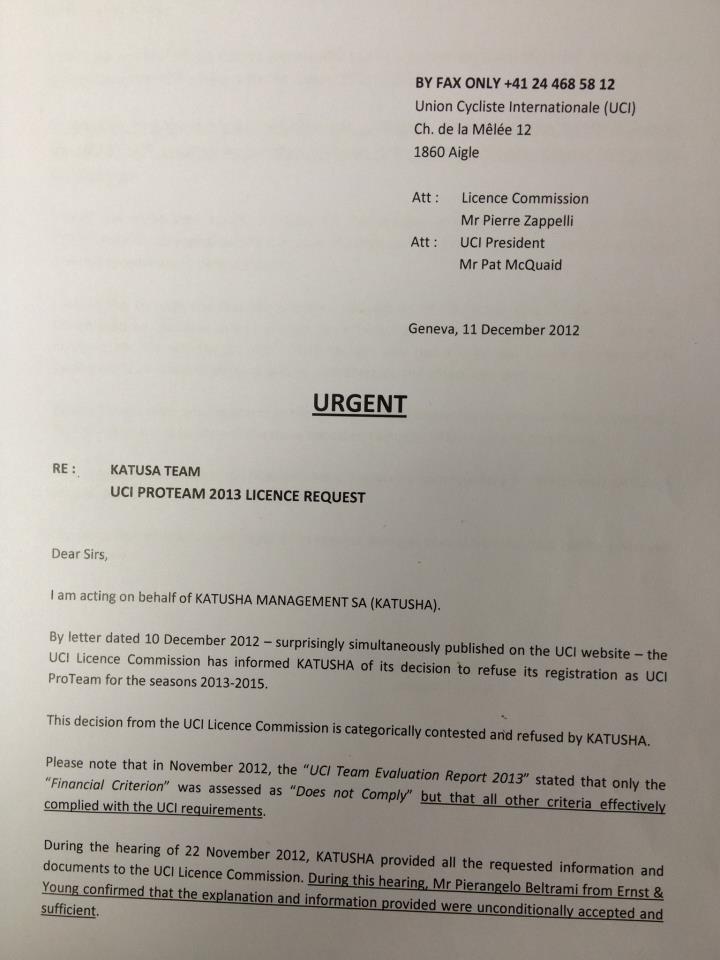 That’s a fax from Katusha’s Swiss lawyers sent to the UCI on Tuesday and you can see the UCI’s rejection is “categorically contested and refused by Katusha.”

What went wrong?
This is the million Rouble question. We don’t know for sure but the document above helps to clear some things up. There had been speculation the team had been called up for ethical issues like employing Viatcheslav Ekimov or the Alexandr Kolobnev race sale allegations but this didn’t stand for me because Ekimov is innocent for now and the same for Kolobnev, the UCI’s investigation into the Liège sale takes place next January. No, instead the talk is of financial problems.

When I mentioned financial concerns on Twitter some wondered how a team sponsored by Gazprom and Itera could be short of funds. It’s possible sponsors won’t cough up the cash no matter how big but there’s more to finance than the sum of money. Having millions of Euros to spend is one thing, accounting for it is another and there are documents that the UCI expects to see, here’s a taster:

For now we don’t know what has gone wrong, it could be that something in one of these documents didn’t satisfy the Licence Commission. The point here is that there’s a lot of paperwork to present, when we say “financial” it’s way more than just having a suitcase of Roubles or Euros. However as the lawyer’s fax states it seems Katusha thought they passed everything.

What next?
The team is already working on the PR front. They put out a press release yesterday which crashed the team website. The message was three-fold:

It’s nice to know they promise to keep things civil. There are direct provisions in the UCI rules to seize the Court of Arbitration for Sport. There’s a short window to appeal and Katusha must to state why it’s appealing but but also name who it will invite as a witness and present more documents. Once the paperwork is filed the UCI then has 15 days to present its documents to the court. An expedited hearing takes place – there won’t be any Contador-case delays for months on end. Done quickly it means Katusha could just about start the Tour Down Under, now less than 40 days away. If it wins.

But things are not so easy. First of all the team is going nowhere, they’re not even registered to ride a kermesse. Katusha hasn’t simply been relegated down from the World Tour to Pro Continental, instead it must apply for the second division licence. Now the terms and conditions are lighter but there’s no certainty. If the UCI has said “no” already then it might reject them again.

Another fine mess
I’ve written about problems with the licensing process run the UCI before. Some points have been theoretical, pointing out problems within the rules that could occur. But here’s a real mess, a genuine disaster. If readers can crowd source another sport where teams are reviewed and rejected just 20 days away from the start of the season, please post a comment. Now I’m fine with rejecting a team, if it can’t meet the rules then it can’t ride. But surely this can’t happen at the eleventh hour, the evaluation process needs to be brought forward, perhaps the summer? Certainly the finance and admin could be taken care of well in advance, leaving the team to work on its sporting aspect, hiring and firing during the second half of the season.

Conclusion
The UCI’s Licence Commission aren’t saps, one of them is a Swiss supreme court judge. This is no light verdict.

But it is a bombshell. Katusha have started an appeal process, first by contacting the UCI and also via the court of public opinion. We’re still none the wiser as to the problems but the outcome will either be a return to the World Tour as the 19th team or an angry year in the Pro Conti ranks or even frozen out the sport for good.

The next step should see the UCI explaining the Licence Commission’s decision. This could lead to the CAS and a fast-track hearing process, certainly Katusha give the impression of wanting to try everything. As long as it is civilized.

Longer term though you wonder about the sport as a whole because it’s another scary prospect for a hesitant sponsor deciding between cycling and another sports sponsorship. And there’s also the political angle with Katusha team boss Igor Makarov sitting on the UCI’s own management committee. He must be red with rage right now and it’ll be interesting to see if he reacts, especially given whispered ambitions to run the UCI or place his man Andrei Tchmil into this role. Plus Russia is negotiating with the UCI to get a World Tour Race (perhaps a WSC event) and a decision on this is expected in May 2013 but Russian cycling officials might well have had enough of the UCI.