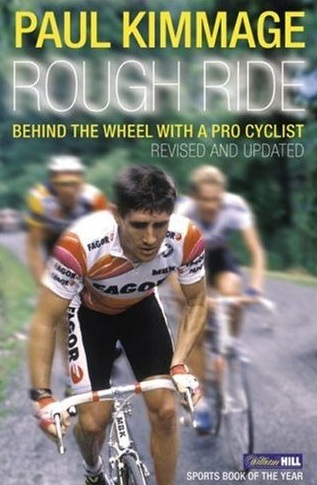 Paul Kimmage’s book “Rough Ride” has been seen as The Doping Book, the text that exposed the use of banned substances in pro cycling when it was published 1990 but it’s much more than this. In the light of recent events I wanted to go back and read the book again.

For most of the book doping seems incidental and the consequence of a rotten system, a response to the environment riders find themselves in. This is much more the tale of a rider struggling to find their place in the sport. The times have changed and some practices in the book are unrecognisable today but much holds true and it is a good read because it offers a tale from the back of the peloton that’s distant from the podium, the prizes and glory.

“The justification for the writing of this book was that it would tell of the unglamorous life of the “back room” boy. The account of the life of an unknown among many unknowns.”

The story starts the same as many other cycling biographies. The first bike, the first race, the promising amateur but things are never as easy for Kimmage and by the time he’s an adult he’s starting to see through the glory of the sport. Take the first time he’s selected to ride for his country. Whilst this should be a moment of pride Kimmage gets a team jersey and finds it unwashed and the pockets contain food from the previous user. Before Kimmage can don the emerald green jersey he must first remove its rotten contents. If you want a metaphor for the whole book, there you go.

“To see him dirty, suffering and with that needle between his teeth turned my stomach.”

No, this is not an Irvine Welsh novel but the tale of the GP Plumelec ridden on a “wet and mucky day” as Kimmage and teammate André Chappuis are the last two riders at the rear of the race and Chappuis reaches for a syringe of amphetamines. But the tale isn’t riddled with drugs and doping, it crops up as much as talk of contracts or selection for a big race.

Kimmage gives us the well worn tale of how first a rider starts on vitamin pills, moves to vitamin injections and then crosses to banned substances, whether amphetamines or hormones like testosterone or cortisone. Kimmage himself accepts amphetamines for a post-Tour de France criterium, in part because of a lack of self-confidence, the fear of being dropped but also because he’s desperate for the money. There’s no illusion of winning the race, after all the results of these criteriums are fixed to please the crowd, something Kimmage exposes along with other things.

“We were up at six, for the longest stage of the race, 275 kilometres. But the race organiser, Vincente Torriani, got his sums wrong and the correct stage distance was 290 kilometres. After the stage we had an hour’s drive to the hotel where there was no hot water for showering.”

This isn’t unique. Ultimately the book is a tale of hardship, of spending years chasing a pro contract only to discover that a pro contract or elite racing licence isn’t worth much: a licence to be dropped, flicked and underpaid.

“I shook my arms and fingers, blowing icy breath on them for warmth. The cold had gone into my bladder, giving me the urge to urinate. I was almost surprised at the steam rising from the yellow liquid flowing from my body. I placed my fingers in the hot springs and warmed them.”

The racing is hard but offers some certainty, if you are riding a stage of the Giro in a blizzard and your hands are cold then you can pee on them for warmth. It’s not pretty but there’s a solution. But there are other problems that can’t be solved so easily and it’s life around the racing that seems harder. Kimmage tells how riders had to wash their own kit after a stage for whilst mechanics service the bikes riders spend time in the evenings hand-washing their shorts and jersey in the basin of a hotel bathroom, scrubbing and ringing the kit with the hope that it would be dry by the morning. This has gone today as squads have washing machines built into the team bus but the haggling over contracts, the constant short termism and finding out your employers plans for the future in the newspaper rather than in private are still in evidence today. Similarly Kimmage criticises the points system whereby a loyal helper without points might be of value to a team leader but not to the team which is as true today as it was in 1989. However Kimmage is clear with one problem: the lack of controls in some races that mean many of his colleagues resort to amphetamines, not necessarily to win but to be competitive and at least to avoid the misery of being dropped.

The difference with today is that whilst Kimmage describes the hardship, the doping almost sounds quaint. His peers are dabbling with the same chemical compounds used in discos or to treat an insect bite, albeit via a syringe instead of a pill or a cream and if it is allowing some to steal wins from others, Kimmage doesn’t tell of the order being turned upside down by it. You wonder what he’d have written if he was a pro a decade or two later, with EPO and blood bags.

The language is simple, the brutal prose feels like Kimmage is too tired to offer florid descriptions of landscapes or his state of mind. But this is all part of the story, he visits Rome with the Giro but laments there’s no chance to see the Coliseum or the Vatican instead the daily route of eating pasta and riding his bike awaits.

It’s not all misery but you can count the highs on your fingers because like the Irish jersey or taking amphetamines, a high is often followed by a low. Kimmage’s time coincides with the high point of Irish cycling and he’s part of the four-man team in Austria when Stephen Roche wins the world championship to add to his Giro and Tour victories. After the book was published some accused him of cashing in on the connection, if he was, say Canadian or Australian, then he wouldn’t have been so close to success, his name would have registered less. But that feels more like shooting the messenger, Kimmage’s words disturbed people more than Kimmage himself.

Conclusion
A good book that I enjoyed re-reading and it reconnects you to Kimmage the racer rather than the journalist or the terrier-like critic of the UCI. Published in 1990 the story is valid today because Rough Ride chronicles the tale of a struggling rider and if the technology has changed, the anxiety has not. Most sporting autobiographies cover the champions but here is the tale of a water-carrier. Bookshelves carry more writing from the few who win races than the thousands who never win much. We love winners but have plenty to learn from the losers as Kimmage’s book shows.

The difference from other losers who have short and inglorious careers is that Kimmage is often the observer and at times the outsider. Even his team mates call him le journaliste, he’s able to note things and concludes the book with analysis. Other books cover doping in greater detail, like The Secret Race or The Death of Marco Pantani. This is more a look at a bad system where bad choices are the result.

Finally if this is the story of Kimmage’s life as a professional cyclist perhaps the book will be updated one day to cover his career as a journalist and crusader against doping. But that story isn’t finished.