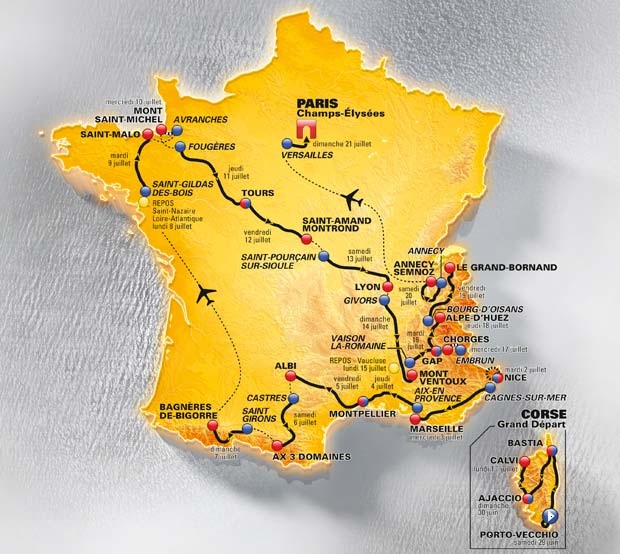 With more time to think about the route come more ideas and a few more points to think about. There’s the matter of smaller team sizes, whether doing Alpe d’Huez twice is hard, a sneak peek for Paris-Nice and more.

The second week is the new first week
The first week is going to crucial, action-packed and dangerous. We will still get several sprint finishes but Stage 2 has a lot of climbing. The team time trial will reshape things and then we have two mountain stages at the end of the first week. By contrast the second week is more sleepy. Monday starts with a rest day then a nice stage across Brittany will see big crowds ahead of the anticipated time trial on Wednesday and then Thursday and Friday look relatively dull.

Third week recovery
This sets the race up for the final week in the Alps where the overall should be determined. It’s possible the winner emerges in the Pyrenees and then defends their lead in the Mont St Michel time trial but they will be tested in the final week. Regularity and recovery matter plenty in the final week.

Smaller teams
There’s been talk of smaller teams in the race, shrinking from nine riders to eight. With no change in the number of teams invited the idea is two fold, first to improve rider safety as fewer riders crowd the road. Second it makes the race harder to control for a single team.

This is something being explored by the UCI and ASO but it is at an early stage, an idea to study. Teams won’t like it, it removes their ability to control the race, especially the big budget teams. But as many would point out, Team Sky lost Kanstantsin Siutsou in an early crash and managed to keep the race locked down for the following two weeks. A marginal loss you might say.

The French media have been calling the double climb of Alpe d’Huez a pousse au crime meaning it will push riders into the crime of doping. The 20 second clip from Radio Totem gives an example, the idea being it’s hard enough tackling this climb once so surely twice is inhuman? Only I have to repeat what I wrote during the week: it’s not as hard as it sounds as the race often approaches the Alpe via the Glandon or Galibier. After the early climb of the Col de Manse there’s flatter section and things only get going for the final 70km. There’s nothing wrong with the stage.

Overall the race offers fewer kilometres. The subject of whether a race is so hard is probably worthy of a proper analysis but note that people cheat for the 100m in athletics and there’s not one a single mountain pass on the route. As the BALCO trial revealed even sprinters were taking EPO.

Prudhomme’s Stamp
Prudhomme has left his mark on the race but he’s learning too. A former journalist and TV presenter, he knows that the race must be made for television. But he’s got a romantic side – as covered last July – where he sees each incline as a potential launchpad to glory, every hairpin bend brings a twist to the race and the French landscape is full of symbolism rather than tarmac.

The last time we had Mont Ventoux the script promised a showdown where riders fought for the overall. But in 2009 we saw the riders mark each other up the Ventoux. The same in 2010 when the Tourmalet was supposed to judge the race only Andy Schleck and Alberto Contador matched each other and held hands at the top before the Court of Arbitration in Sport finally settled the result. 2013 looks a touch more realistic and the short time trials offer a mix that makes the race more open, as if Prudhomme knows you can’t pin too many hopes on a single stage.

Mystery Crime
Talking of pins, you might remember the multiple punctures on the Mur de Péguère climb of the last Tour de France. A police investigation has been opened. Where are things now? “There’s no news” is the answer and this looks like it’ll be an unsolved crime.

Full route
A few people have been asking when the full route comes out. The answer is normally in May. But you can plot it yourself for some of the mountain stages or if, say, you’re planning a trip to France and want more precision, email me and I’ll try to help. If you’re tempted to visit then I’d recommend the Alps as the time trial is good to watch and Alpe d’Huez will be wild.

Paris-Nice
On the subject of route details for next year ASO sell the right to host a Tour stage as a package, whereby towns who bid for the Tour are encouraged to take on other races like Paris-Nice. And when a town bids, in fact each tier of regional government in France often contributes. So when Mont Ventoux won the bid to host a Tour stage, the nearby Montagne de Lure ski station gets a stage of Paris-Nice in 2013. It’s a smaller version of Mont Ventoux and also featured in 2009 too when Contador won. It seems when the Tour gets Ventoux, Paris-Nice gets the Montagne de Lure. It’s a hard climb especially for the early season race and means the 2013 edition of Paris-Nice looks set to suit the climbers. The route for this race should be announced in late January.