The route of the 2013 Giro has been unveiled. Like the Tour de France, information about the race leaks out ahead of the presentation but today’s the chance to take the individual stages and stitch them together into a three week story.

The route is classic but non-standard. Classic in that it loops south and mixes climbing with sprints, classic with the usual Alpine finale. But different because it features a giant 55km solo time trial at the end of the week, different because the average stage lengh is shorter.

This year’s edition will start in the bustling city of Naples with a circuit race around the city and by the sea front. Famous for its bay and its dormant volcano, it is also the home of excellent food and some fine roads. It’s also infamous but the Giro will steer well clear of places like Scampia. Then the next day sees a trip to the island of Ischia for a team time trial followed by a return to the mainland for a start on the tourist hotspot that is the Amalfi coast with two climbs before a descent to the finish. By Tuesday we get the first “summit” finish as the race explores the toe cap of the boot of Italy with the Croce Ferrata but the climb is followed by a short descent and is the kind of finish you’d back Philippe Gilbert or Rigoberto Uran.

As the chart shows we then get a procession of stages including some climbing for stage 7 before the crucial Stage 8, a 55km time trial that seems designed to attract the likes of Ryder Hesjedal, Bradley Wiggins, Chris Froome and Cadel Evans to the race because no matter what comes later in the race they can put molto time into the likes of Purito Rodriguez.

Stage 9 has a nod to the world championships in 2014 with the arrival in Florence, a capital of Italian art and cycling. It is followed by a rest day and a good transfer north.

Stage 10 in Friuli sees the start of the serious climbing with the goat path-style Passo Cason di Lanza and a finish at the Altopiano del Montasio, both with double-digit gradients and it’s here we’ll see the overall contenders emerge.

There are more sprint stages and it will be interesting to see who is there. Presumably Mark Cavendish will be there and we can imagine Astana, perhaps with Vicenzo Nibali but surely with Andrea Guardini and we’ll see if the Italo-Kazakh team can combine overall ambitions with sprinter support in what is almost their home tour.

On Stage 14 there’s the long climb to Sestriere before the race drops to the Val di Susa and the French border with an arrival in Bardonecchia, usually known for the giant road and railway tunnels that connect Italy with France. But now cyclists will know it for the uphill finish on the road to Jafferau which is unsurfaced beyond the ski lifts… but it’s possible the finish line is painted where the tarmac ends.

Stage 15 sees the race visit France. The Giro has done this before and Mont Cenis on the menu before the Col du Télégraphe and then the finish at the top of the Galibier. At 2,645 metres the race should count itself lucky if the road is open because normally it is not cleared of snow until the end of May. We can imagine RCS have a plan to hold the finish in the ski resort of Valloire in case the road is closed higher up. 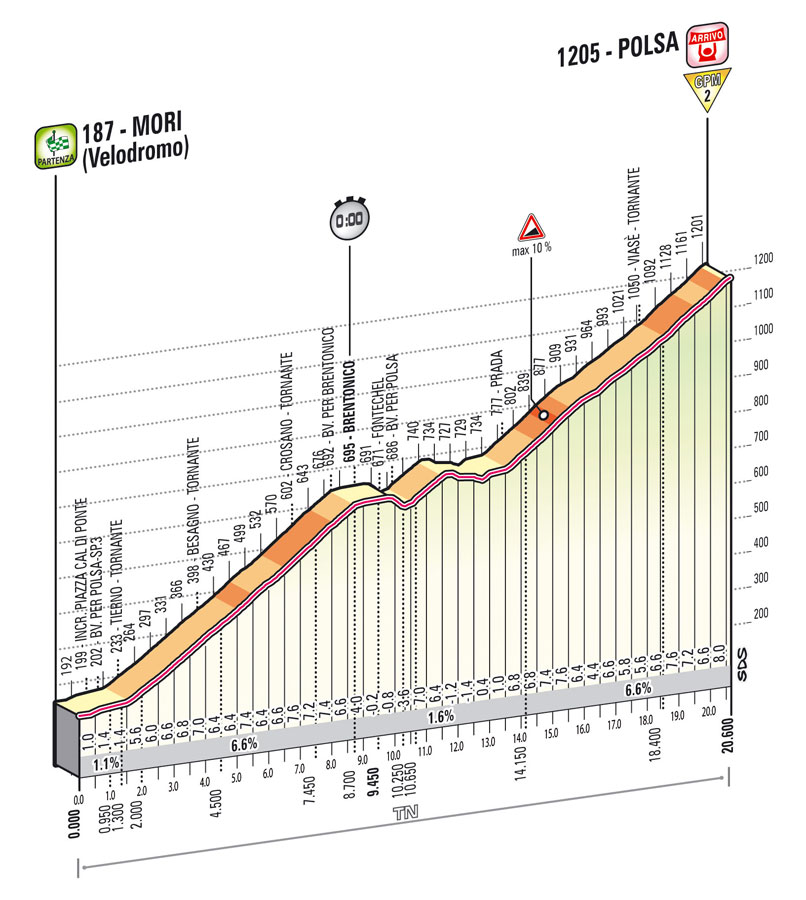 Stage 18 is a mountain time trial. As we can see it is 19.5km long with a vertical gain of around 1,000m meaning it averages just 5% with the typical slope around 6%. This means it is not for the pure climbers but instead suits the big overall contenders who can both climb and time trial. 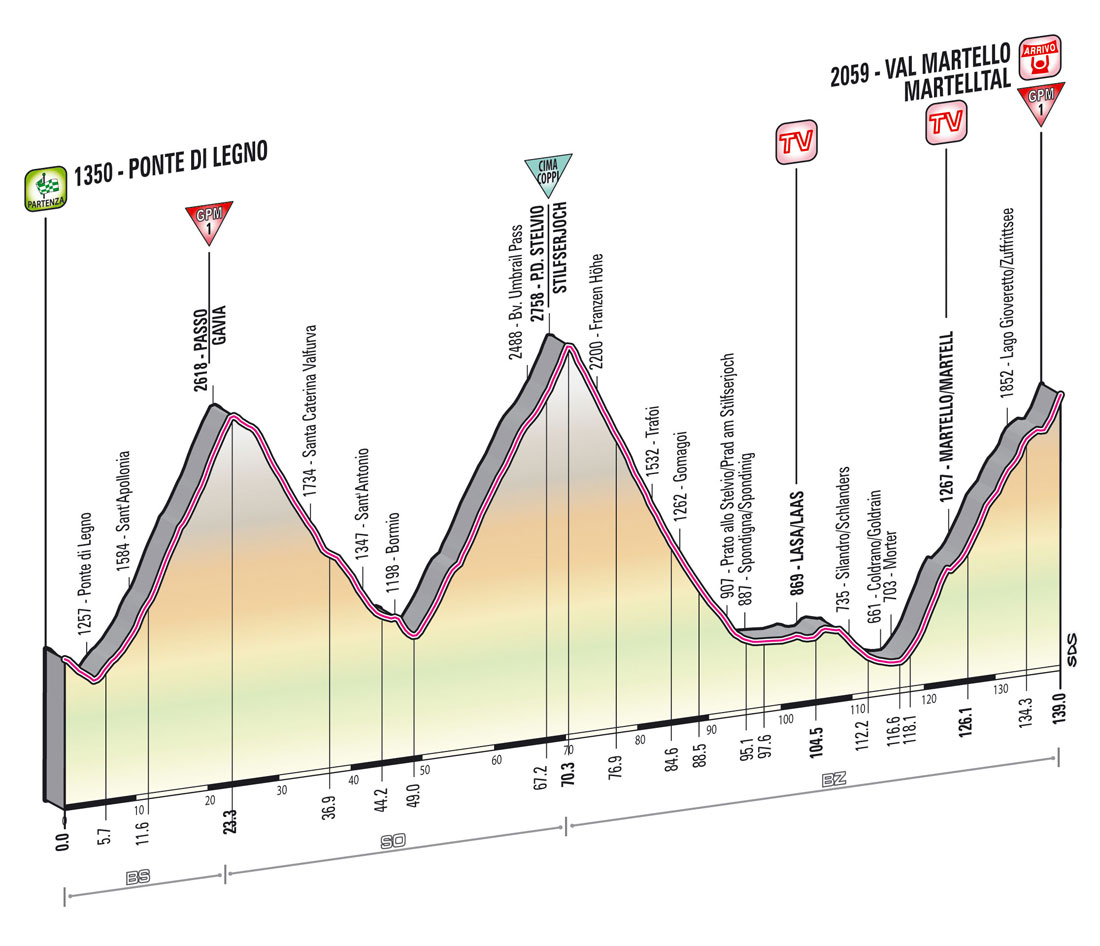 Stage 19 is just 138km but the vertical gain is the real story as it features the mighty Passo di Gavia and then the Passo di Stelvio, the 2013 Cima Coppi, before a summit finish to Val Martello. This promises to be a tricky stage with attacks right from the start and those who can’t climb fast will battle at the back just to stay in the race. 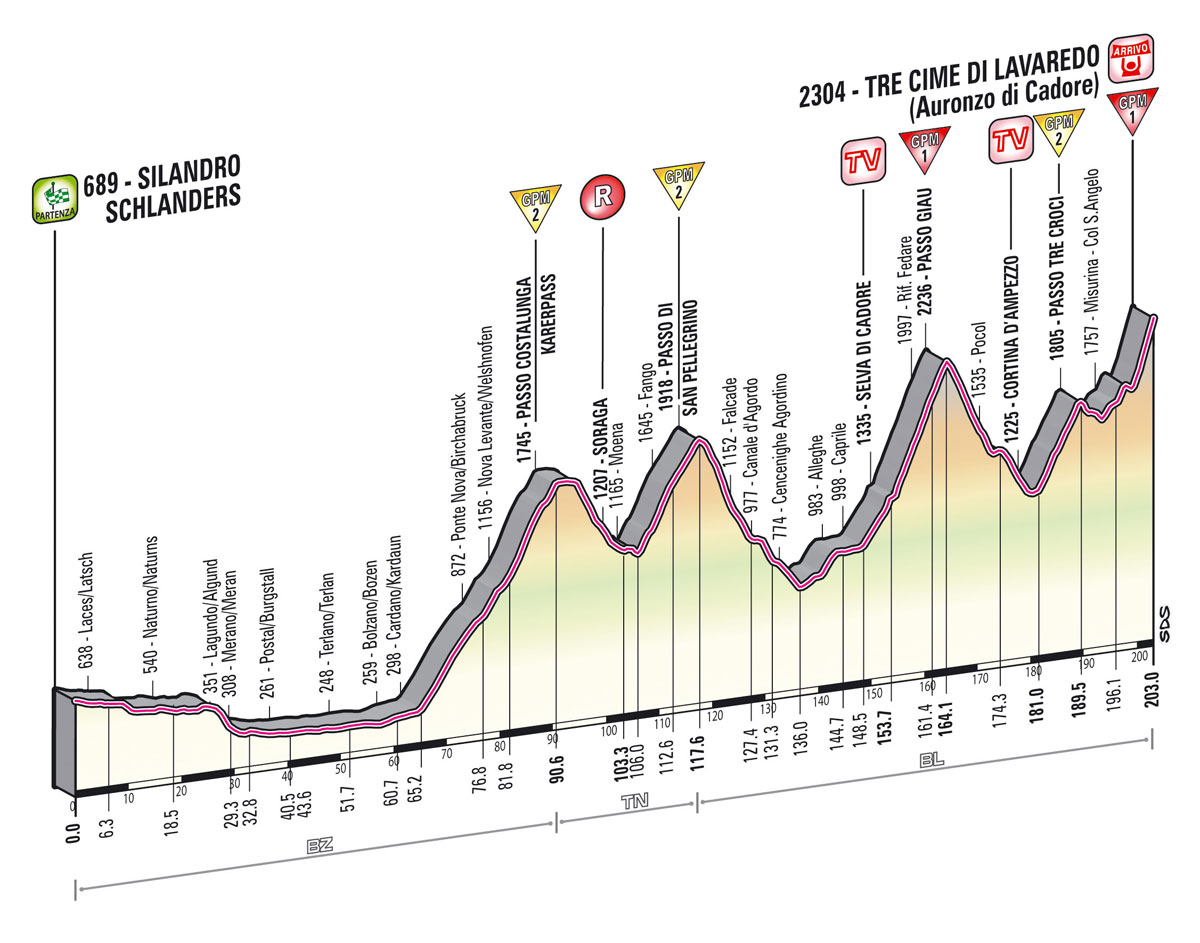 The Giro’s “fight for pink” slogan makes you think of angry princesses, Stage 20 reminds us this is heavyweight contest. Five mountain passes and a high altitude summit finish make this one of the hardest days’ riding you can find in Europe.

Finally Stage 21 is a flat procession to Brescia where the race will end after five loops of the city, a last chance for the sprinters to celebrate.

The Verdict
If the route is unveiled there is still plenty more to discover. Will Monte Jafferau be surfaced next year? How will the Passo Cason di Lanza cope over winter? But these questions can be asked next spring.

For now we have a classic race that is packed with climbing thanks to seven uphill finishes which, with their short distances, give a feel of the Vuelta. But it’s balanced by a long time trial and a mountain time trial that’s not steep. Add on the team time trial and we have 92km against the clock. This suits the passista over the scalatore. The riders won’t enjoy some of the long transfers, apparently they will total 2,200km, a record. But these seem inevitable as the Giro aims to cover as much as the country as it can. In mitigation the riders might like the short stages, four hours instead of six.

Today’s presentation lined up a series of riders who soft-pedalled when it came to talking about their chances next year, it is too early to know who will be taking part. The route looks ideal for the likes of Alberto Contador, Chris Froome, Cadel Evans or Bradley Wiggins whilst defending champion Ryder Hesjedal might need to tweak his time trialling to rival them. Riders like Joaquim Rodriguez, Michele Scarponi or Domenico Pozzovivo look better suited to stage wins, because even if these come with precious time bonuses, the 55km time trial will leave them floundering like a fish out of water.

But let’s not extrapolate too far. We should not try to nail down the 2013 race so early, it is better to imagine the roads of Italy as a blank page where a cast of characters will write their own history and determine their own destiny. If the route is now fixed, the only other certainty that for three weeks starting on 4 May 2013 we will watch one of the world’s greatest races.