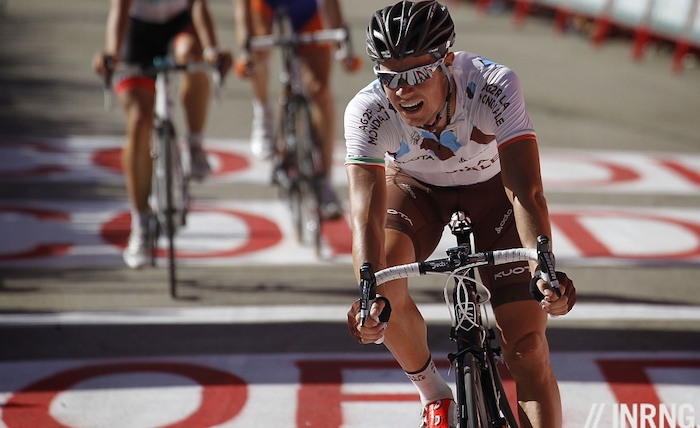 Cycling goes big on history. Champions from the past are venerated and today’s races draw prestige from their past and not their past list. At the same time it’s a sport that’s always looking to the future. Make a mistake today and there’s always tomorrow and look at the Vuelta where several riders are there to train for the World Championships, a three week grand tour is a mere training camp for future races.

But there’s a hidden side to this. Namely we have riders wearing the jersey of one team but riding for another. This happens because they have already signed for a new team for 2013 but are racing the Vuelta for their existing team. For now it’s not changed the results but it is easy to envisage a range of scenarios where the results are distorted.

Take today’s climb to Valdezcaray. At one point we had a move with Dani Navarro and Alberto Contador of Saxo Bank-Tinkoff, Chris Froome of Team Sky and Nicolas Roche of Ag2r-La Mondiale. But Navarro is going to Cofidis and Roche is joining Saxo. Look to the future and Alberto Contador’s team mate was Roche, not Navarro. Indeed whilst Navarro has a pedigree of total loyalty to Contador, things have changed since he’s going to Cofidis and the French squad will welcome points. We cannot say Navarro will ride for himself but we can see the incentive.

Is this speculation? Not necessarily, riders are acutely aware of things. Take the Olympic road race where one of the first riders to chase the breakaway was Vasil Kiriyenka. Why was the Belarus rider working? In turns out he’s joining Team Sky for next year so he was already working for Sky/Britain back then.

Things get even more complicated when we consider the vital importance of UCI points. To recap there are 18 teams in with “Pro Team” status and automatic and their haul of points, known as “team value”, is a primary determinant of whether they stay in the top flight. The haul is calculated every October on the basis of the team for the following year. In other words in October 2012 the UCI will work out the team value based on a squad’s signings for 2013.

Let’s take the case of Contador and Roche in the breakaway again. Behind in the team car Bjarne Riis has one hand on the wheel and the other… on a spreadsheet. Well perhaps it’s in his mind but the Danish team is devoting a lot of thought to getting the points needed to stay Pro Team. So if Contador and Roche are away in a move, who does Riis want to win the stage? Roche. Why? Because Contador is returning from a doping ban and a current UCI rule says those returning from a ban cannot score any ranking points. So Saxo’s can only score points via Roche doing well. Ultimately Alberto Contador and his Saxo Bank team want to win the race but don’t be surprised to see Roche given some help along the way.

Does it matter?
Yes and no. Purists might not like this and I tend to agree but I can see the incentives at work. Therefore the main thing is to be aware of the conflict of interest so you’re not left scratching your head when things look strange on TV. It’s not unique to the Vuelta but the way the Spanish tour comes late in the season means it is the most obvious example.

Can it be prevented?
We cannot stop the riders, instead the system has to change so the incentives are altered. Roche himself is critical of the points system.

One example from the outside world is “administrative leave”, sometimes called “garden leave”. When an employee announces they are leaving for a rival company they must still see out their contract but are told to stay away from their current workplace because they are already deemed to be in the rival camp. This would be disadvantageous in cycling though as suspending a rider until the end of the season means they miss out on races, results and conditioning so everyone loses. Indeed this is what some teams have been doing and it’s regrettable.

Another solution would be to revisit the timing of contracts so riders are not signed to new teams for the following year during August. But this still doesn’t fix things. Team’s aren’t supposed to sign riders before August but they do, as the Kiriyenka case suggests. Therefore perhaps the only remedy is to look at the points system again so that there’s a balance of interests. Easier said than done.

Conclusion
As a sport cycling is often nostalgic. But the riders and teams are futurologists, always with an eye on the next race and the upcoming season. In a way the 2013 season has already started in a small way with riders signing for new teams and they get new incentives. As such the Vuelta is a last chance for some riders to save their 2012 season but also a chance for others to start work, implicitly, on the next season.

It seems hard to remedy this. At least we can be aware of it.