The race heads away from the mountains for the Rhone valley but takes a winding route over several small climbs. If the race took a straight line it would head over the awkward Vercors mountains, instead it avoids such testing roads but still, this is an awkward stage for riders and teams alike, none more than Luke Durbridge and Orica-Greenedge.

French TV commentators learned a new word yesterday… or at least how to pronounce “Luke”, as in Durbridge. In the early afternoon it was “Lookay” Durbridge but the Australian won the day and French TV fixed things. Odd, since almost everyone in France knows how to pronounce the name “Luke” given the popular comic books called Lucky Luke. Besides it’s just like the French name “Luc”, as in Luc Leblanc, the 1994 World Champion.

Was Luke lucky yesterday? Perhaps, the weather helped him set a fast time and he paid tribute to Mother Nature saying “I was lucky with the wind and the rain… …Sometimes you just need some luck” but others enjoyed similar conditions and didn’t go faster. The faster Durbridge goes, the luckier he gets.

Today’s stage should be a sprint finish but it’s not a nailed-on certainty. Any feeling of frustration from Wiggins at being beaten just by one second will be met with relief by his team mates today. Orica-Greenedge now have a jersey to defend and they’ll try to contain any breakaways during the day. The Australian team don’t have high hopes for the overall so keeping the yellow jersey for as long as possible will be the aim, even if they have riders capable of poaching stages. Meanwhile Team Sky don’t have to work all day.

There are few sprinters in the race so many teams – especially the French ones – will be keen to send men up the road in the hope they’re not reeled in. Expect a flurry of attacks and several teams to place riders in a breakaway. But several teams might fancy a sprint, for example Argos Oil – Shimano with John Degenkolb and FDJ – BigMat want to set up Nacer Bouhanni. Plus Edvald Boasson-Hagen can have a go, even if most of Sky are working to protect Wiggins.

However there are several obstacles for the sprinters. The last climb is the Côte de la Sizeranne, 9km from the finish. It’s listed as 6.6% for 2.9km, enough to give the sprinters trouble. I’ve looked and it seems more like 6.9% for 2.6km and steeper than the average suggests, kicking up at 7-8% for the first kilometre, then a tiny dip, before rising up again at more than 7%. This is enough to thin the bunch and those fighting for the stage or the overall will need to be at the front. This time last year people would have been tipping Philippe Gilbert and watch for others like Thomas Voeckler or Alexandr Vinokourov. 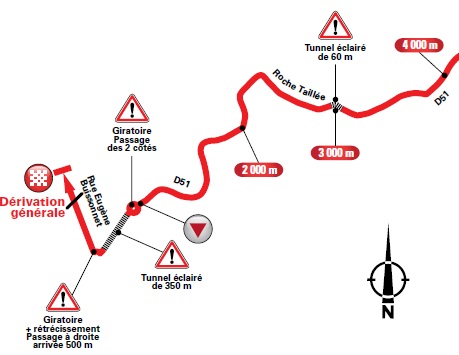 The last kilometre is flat but worthy of the Giro. One roundabout then a 350 metre tunnel and then a roundabout with a narrowing road and a right turn just 500 metres from the finish line should make it lively.

Weather: cold conditions at the start but the more the race heads west, the warmer and sunnier it will get. A light breeze from the north, temperatures will be a cool 17°C (64°F).

TV: the finish is expected between 4.00pm and 4.30pm Euro time but tune in at least half an hour before to watch the final climb plus to see if a breakaway can make it.

Eat: the finish area is big area for fruit production where peaches, nectarines, apricots grow in large orchards. This being France they are often quickly transformed into jam and cakes.

Wild pick: Julien Simon of Saur-Sojasun. The double stage winner in the Tour of Catalonia has a fast finish and should be able to clear the the final hill.

Next post: Book Review: Riis, Stages of Light and Dark