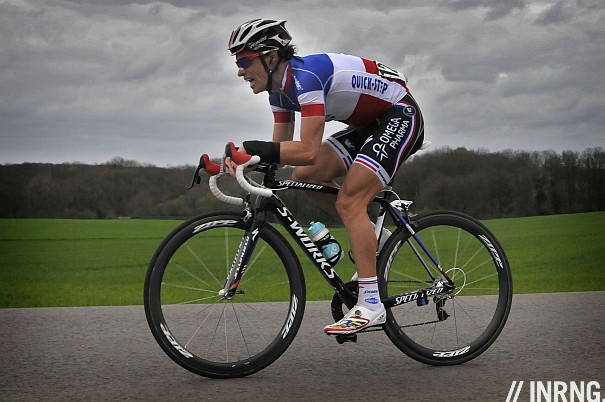 It’s the weekend of the national championships across Europe. Whilst America, Asia and Australia have different weekends, pretty much everywhere in Europe sees simultaneous national championships. In some European countries these races can take on a strange feel with several teams of 25 riders starting, making the tactics completely different from your usual race.

The scenario is odd. Several large teams can try to control the race whilst riders from smaller squads can try to hitch a ride. I’ve often thought these races are a certainty for the large squads but in recent years riders from “smaller” teams have triumphed. Sylvain Chavanel won the French title last year despite having only one Quickstep team mate; the previous year Nicki Terpstra broke the Rabobank stranglehold in the Netherlands. Whilst team tactics can have their say, with such a large presence some teams see their energies dispersed. And the title is worth so much that obeying strict team orders can be hard. For example very few of the starters in the French race tomorrow can ever hope to become world champion but they can land the national title. It could get them invited to the Tour de France in July, in August this means many invitations to lucrative criteriums and they are easily recognised for a year. But it also gives the rider and honour for the rest of their life. So when the race reaches the last hour it’s no surprise to see some riders start thinking of themselves.

Is Voeckler bluffing?
Apparently Europcar’s Thomas Voeckler is called “Hollywood” by other riders as he’s such an actor, pretending to be full of fatigue only to spring back to life once the finish line gets closer. After last year’s ride in the Tour de France I’ve wondered aloud if he would ever be allowed in a breakaway again. Now it seems he’s been out with a knee injury and even his Tour de France start could be in jeopardy. We’ll see, I wonder if this some giant sneaky ruse to downplay his chances ahead of July.

More cortisone cases
Voeckler’s been suffering from a sore knee. The obvious remedy is rest but it’s common to get permission to use cortisone to treat any inflammation. One mystery that is still unexplained is Europcar’s Anthony Charteau. He was ordered to stop racing by the French Federation earlier this year following an “elevated level of cortisol”. It’s not clear if he had medical permission to use cortisone and as yet there’s been no update on what happened.

However I can reveal that other riders in France have been told to stop racing this year for the same reason as Charteau, only their names have not emerged. This could be a big story but for now I can’t go further other than state that several riders have told to rest for the sake of their health. Note this does not equate to a positive test but if several riders are being stopped then there could be a trend at work. Watch this space.

New Tour website
Now for some good news. I mentioned on Twitter in the week that for one of the world’s biggest sporting events the Tour de France has a dull website that’s feeling more and more retro these days. The race is almost absent from social media. Replies were mixed, some said the fans do plenty to talk about the race so ASO doesn’t have to spend time and money on a better website but I still think if you own the biggest bike race in the world you could try to have the best bike racing website too. As for social media, the 1946 Giro d’Italia has a stronger presence on Twitter. But I gather a new website for letour.fr is coming very soon.

New Saxo sponsor
Talking of new things, Danish squad Saxo bank are set to announce a new headline sponsor. It could be jointly-named alongside Saxo Bank. Rumours say it is either a Russian firm or a Spanish bank, possibly Santander. Or maybe even a German firm to replace Saxo entirely, you heard it here first.

Either way the identity will be revealed next week but it’s another one of Bjarne Riis’s deals. Each time you think he’s down he bounces back.

Will Bruyneel tour Poland?
Radioshack-Nissan manager Johan Bruyneel won’t be going to the Tour de France. He’s had an odd status on the team as a manager but not a recognised directeur sportif. Invited to respond to allegations made by USADA recently his presence in July would have been awkward for everyone, whether the team or the Tour de France.

But we’ll see if he goes to the Tour of Poland. Whilst all eyes are on the Tour de France for obvious reasons the Tour de Pologne – as they call it even in Poland – is also on the World Tour calendar. It’ll also be an alternative Olympic preparation stage race and worth following.