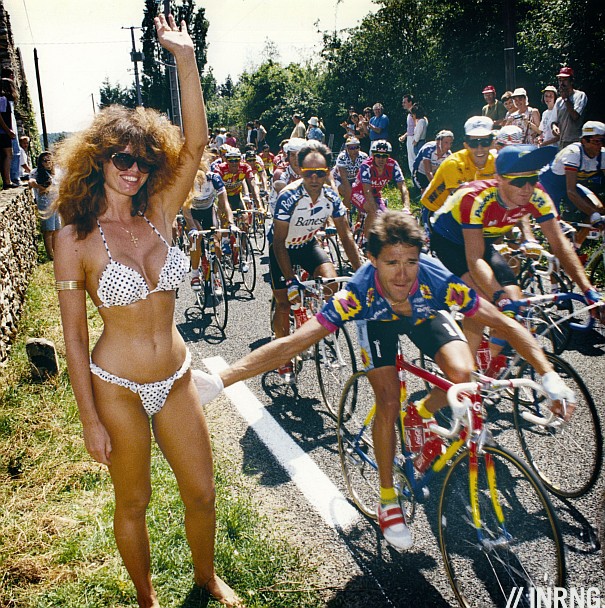 Eric Boyer has had happier times in July. That’s him in the picture “reaching out” to a fan on the last stage of the 1992 Tour de France. This year he faces sitting at home after being fired as manager of the Cofidis team.

Boyer was a decent rider. Born outside Paris, he rode for succession of French teams before a final season with the Italian Polti team. A light build, his speciality was short stage races where he could deploy his climbing skills with crafty tactics. But he was also a useful ally for team leaders like Laurent Fignon and Greg Lemond.

When retirement came Boyer joined Eurosport as a TV pundit, forming an expert tandem with broadcaster Patrick Chassé. He had other roles which slotted around his broadcast schedule. He formed a sort of consultancy for cycling and worked with the Canadian national team and spent July as a chauffeur for the Tour de France, notably driving Bernard Hinault.

He joined Cofidis in the wake of doping scandals. The team was a madhouse for years – so was the sport – but finally the squad’s owner, Cofidis boss François Migraine decided it was time to clean up. Out went Alan Bondue and in came Boyer midway through 2005. Note he was the team manager, a level above Alain Deloeuil, Francis Van Londersele and Bernard Quilfen who stayed in place despite the change of managers. 2006 didn’t see anything special, one stage win in the Tour de France thanks to Jimmy Casper. In 2007 the team had several wins but mostly in smaller races on the French calendar and of the 17 victories that year, four came from Bradley Wiggins whilst Chris Sutton and Tyler Farrar also scored. By 2008 Boyer made the team more French and the team had arguably their best ever season with two stage wins in the Tour de France, and a semi-classic Dwars door Vlaanderen – Waregem thanks to Sylvain Chavanel. But in more recent years the results have been lean, wins come in smaller races like the Tour de l’Ain or the Tour du Limousin rather than the Tour de France and the spring classics.

Things changed, you started to see riders training and racing with power and the team hired a sports scientist, a Dutchman called Vincent Villerius to advise on training. But if the team could spot talent, it struggled to hold on to it. Bradley Wiggins left in a hurry and one of team owner François Migraine’s recent headaches was Tony Gallopin who left for Radioshack. Over the years Tyler Farrar and Sylvain Chavanel are other riders who left and improved. 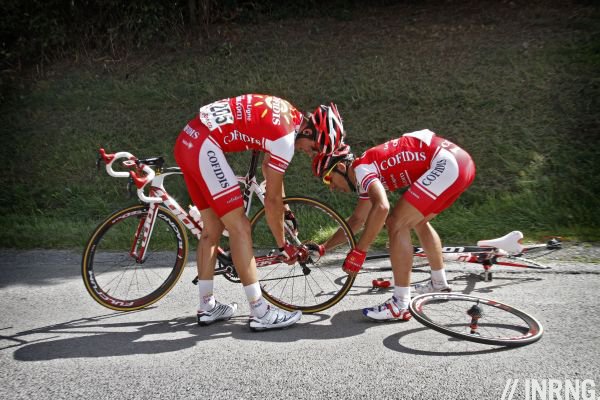 The wheels come off

Things came to the boil last weekend. A disappointing spring classics season and mononucleosis for team leader Rein Taaramäe meant the team has been almost invisible this year. On the eve of the French championships Boyer said a quick goodbye to his team mates and was spotted leaving the team hotel in a hurry. Things were made official since then and Boyer is gone.

But was Boyer to blame? No, but as the manager he carries the responsibility. Note François Migraine was partly responsible for recruitment, often making direct approaches to sign riders without Boyer knowing about it. Above all the team had a modest budget so if Cofidis is frustrated by a lack of results, it has hardly because it’s recruited stellar names who have not delivered, for example like BMC.

In comes Yvon Sanquer, the Monsieur Troubleshooter of team management. Sanquer has been called in to stablise Festina and Astana in the past after scandal hit these teams. Most recently he was hired by FDJ-BigMat to help as a directeur sportif in the Ardennes classics and the Giro.

Performance Management
Managers come and go in most sports but it’s rare to see managers fired in cycling, largely because the management are often the owners of the team. Cofidis are different, the sub-prime consumer credit from northern France has been in the sport since 1997 and we’ve seen a range of managers succeed and fail in Cyrille Guimard, Alain Bondue and now Eric Boyer.

Ultimately you would think weak manager-owners would be out of the sport as if they fail and nobody will sack them at some point a sponsor will desert them. But in cycling a team owner with a UCI ProTeam status has an automatic invite to the Tour de France, enough perhaps to tempt a sponsor.

Conclusion
The team was once one of the biggest in the sport. It even recruited Lance Armstrong for 1998. But in recent years it has retreated to a more domestic focus with the aim of qualifying for the Tour de France via a wildcard invitation every year. Boyer worked to improve the team but if he’s gone, I’m not sure if we’ll see any big changes in the team unless the Cofidis boss François Migraine decides to review the budget.

July will tell us more about the Cofidis team but if the team succeeds it’s hard to say if this is the new management, a stroke of luck or even the results of groundwork from Boyer. Because the team’s tactics are simple enough:

does cofidis need a DS at #TdF12 at all? riders need to go in the break everyday and that’s it.

I couldn’t have put it better myself.

Next post: Who Will Finish Third in the Tour?