Many seem to have enjoyed the Giro, especially with the final week and the suspense that went all the way to the last moments of the final stage. Sport offers highs and lows and in reality there can be many moments of boredom. Indeed lest we forget the Giro had its siesta moments too, inevitable during three weeks.

So what’s next? We’re right in the middle of the pro cycling season. April and its spring classics offer plenty of excitement but this time of year has plenty to offer as well. Many from the Giro will take a break but many big names are starting their approach to the Tour de France.

The week ahead is itself somewhat quiet. The only men’s UCI race on during the mid-week is the Skoda-Tour de Luxembourg. It has a strong HC rating and if it doesn’t draw a great deal of excitement, it’s often worth paying attention to the results. Luxembourg is a very small place. Indeed the red triangle represents its size in relation to the USA… or Kansas. 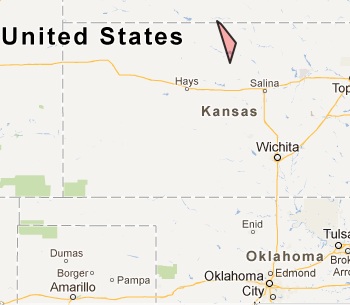 But the small Duchy has some very hilly roads, the terrain is similar to the roads of Liège-Bastogne-Liège. As well as watching for the stage winners, note who is in the top-10 each day. Any sprint finishes happen after a decent amount of climbing so the sprinters who make the front group are in good shape for the coming weeks.

Critérium du Dauphiné
Starting on Sunday this one week race is like a mini-Tour de France. Organised by ASO who also organise the Tour de France it also uses mountain passes familiar to the Tour and seems to capture France in the summer. It’s a useful test of form ahead of the Tour too. This year’s edition seems to have attracted many of the sport’s big name GC riders, although few sprinters are coming. It shares some similar roads to the Tour, including the Grand Colombier climb plus a long time trial too. A fine race in its own right but comparisons with its big brother in July are inevitable. Hopefully I’ll do a daily “Spin” preview for each stage during this race.

Tour of Switzerland
Arguably the fourth biggest stage race in the sport in terms of prestige at least, the Tour de Suisse offers plenty of tests in the mountains with stunning scenery. A pity it overlaps with the Dauphiné, ideally the French race would end and this one would start a week later. It begins on Saturday 9 June so it’s not for tomorrow.

The Tour looms
We’re only 33 days away from the start of the Tour de France. Like a mountain peak that dominates the landscape, the Tour de France is the summit of the cycling season and the biggest bike race in the world. From now until the prologue of this race riders will find their efforts judged in duplicate, first for merit on the day but second via an extrapolation towards July. Does a strong ride in the Dauphiné mean a rider has peaked too soon? Is an erratic showing in Switzerland a sign that time is running out? A crash or illness can crush many a rider’s plans too.