The final stage of the race is a time trial and the overall result is not yet certain. Three weeks of racing across Italy with numerous mountain passes and Joaquim Rodriguez leads Ryder Hesjedal by just 31 seconds. It seems likely that Hesjedal will take time on Rodriguez, enough to win the race outright. Is this possible?

At first sight things seem obvious. The big Canadian looks more powerful and a very low position on the bike as well; by contrast Rodriguez’s weak point is the time trial. But things are never so simple.

Head to Head
Thanks to Cycling Quotient we can see Hesjedal and Rodriguez have ridden 21 time trials together. Hesjedal has finished ahead in 14 whilst Rodriguez has got the better in 7. Of course riders can compete in many events in the season and not even know the other is taking part, yet alone seek to beat them. Riders might have different objectives and be in a different state of form. Based on the pure stats Hesjedal has a 66% chance of bettering Rodriguez to 33% for the Spaniard which is a rough figure although it suggests today’s stage is far from a certainty. But even if he finishes ahead, can Hesjedal take back at least one second per kilometre?

Today is unique but we can look back one year. Last year’s Giro concluded with a time trial in Milan too. Hesjedal finished 45th whilst Rodriguez was fourth from last and three minutes slower than Hesjedal. Hesjedal had not been battling for the overall but he had been riding hard in the mountains, Rodriguez too didn’t have to fight for the overall lead.

Another more recent clue was the team time trial. Katusha finished a surprising second, just behind Garmin-Barracuda. Presumably this was down to the efforts of Brutt, Ignatiev rather than Rodriguez but the Spaniard was part of the this.

The Podium
We can’t just look at Hesjedal and Rodriguez. Here’s the top five overall:

Here we can see see De Gendt is easily within range of Scarponi and third place. In fact the Belgian could go higher today and take second place overall… or even better. Last summer in the Tour de France’s final time trial around Grenoble De Gendt was third, only beaten by Tony Martin and Cadel Evans. He will be cooked today after his efforts on the Stelvio but nonetheless he’s got plenty to aim for and could well surprise. And if Ivan Basso rides exceptionally well then he could overtake Scarponi too.

The Course
Pan flat but technical with some corners, the stage starts in central Milan and heads out to the north-west of the city before heading back to finish on the Piazza Duomo, the large cathedral square that is well-known to cyclists since it is the start of Milan-Sanremo too. Some have said it is a technical course but whilst there are quite a few 90° corners there are also a lot of long straight sections where a rider can deploy a big gear. Combining acceleration with outright top speed is essential. 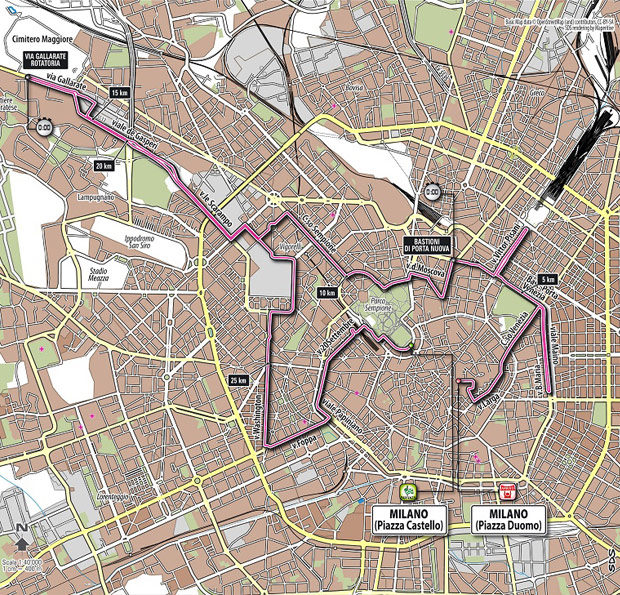 After three weeks riding a time trial is very different than doing this on the opening day. The body is tired, the legs feel wooden and each acceleration is harder. Riders will struggle to get near their maximum heart rate and the wattages prodced will be lower, although if they can’t hit the peak power they can still sustain a big effort for some time. Today’s stage is just over half an hour long which is a violent effort and the riders will look to ride the course this morning and complete a long warm up prior to their ride. Many though will be satisfied with a steady warm up and then a lap of Milan as they head for the finish of this giant race.

The Stage Winners
For all the suspense at the top of the general classification there is of course the battle to win the stage. Taylor Phinney is the obvious pick but watch out for Gustav Larsson. Marco Pinotti, Jan Barta, Geraint Thomas, Mikhail Ignatiev and Jesse Sergent could also feature.

TV: the GC contenders will be off after 4.00pm Euro time with Rodriguez the last to go around 4.40pm and expected to arrive around 5.15pm.

Weather: fine and dry with almost no influence on the race. Top temperature of 24°C (75°F).