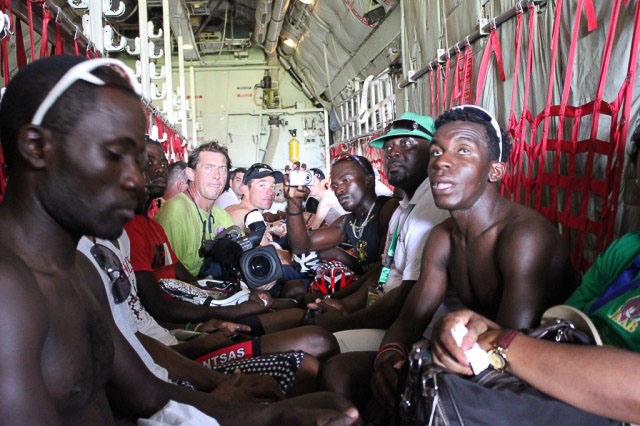 Thomas Voeckler got played yesterday. Shortly after finishing Liège-Bastogne-Liège the Frenchman made his way to Frankfurt airport to fly out to Gabon. Once a French colony, today an oil-rich state on the west coast of Africa with exceptional wildlife, Gabon also has an annual bike race, the Tropicale Amissa Bongo. Named after a member of the Bongo family that rules the nation, the race has a diverse field of teams with Europcar.

Sadly the results are hard to come by. I can’t see them on cyclingnews.com but instead the superb AstanaFans.com has coverage (in Russian) because the Astana development team are riding, and with some success. The photo above by Elena Ryabovol shows the conditions for one of the stage transfers with riders, staff and media loaded into a military transport plane.

Each day the race has been chronicled by L’Equipe. Yesterday Voeckler and team mate Anthony Charteau rode with Moroccan Tarik Chaoufi and Eritrean Okubamariam Tesfom in a breakaway. Chaoufi looked tired and played dead and Voeckler, already a stage winner earlier in the week, was hoping to set up Charteau for the stage win. Only Chaoufi revived in the finishing straight to win the stage. Philippe Le Gars writes things almost got violent but Voeckler got a taste of his own medicine, as he’s infamous for acting at times, feigning fatigue only to spring back. Some Spanish riders call him “Hollywood” but he was outplayed by Chaoufi.

L’Equipe keeps seeing the race via Thomas Voeckler which is understandable but if Voeckler has a story to tell, imagine what the local riders must think, many on simple bikes and without much racing in their legs. It’s been lively so far with a variety of stage winners and the lead has changed several times. I rather like seeing the locals taking part, this event seems to be embraced by the population in a way that the Tour of Qatar or the Tour of Beijing is not.

Wildcards
There have been several announcements on stage races this week. The Dauphiné invited Argos Oil-Shimano, Cofidis, Europcar and Saur-Sojasun to race in June, if this quartet sounds familiar it is because they’ve also got the call up for the Tour de France. Meanwhile the Vuelta has picked Andalucia, Argos Oil-Shimano, Caja Rural and Cofidis. Each of these teams sit in the second tier of pro teams, known as UCI Pro Continental. It’s a tribute to Argos Oil-Shimano who manage to avoid the financial and regulatory burdens of the top tier but get access to almost every race they want.

Tame cards
It’s a lesson Saxo Bank could learn. They are worried about losing their World Tour licence, to drop down to Pro Continental level. But Alberto Contador looks set to rejoin the team and the team could find all sorts of invitations thanks to Contador, it would hardly be “wild” to invite Saxo Bank to the Tour de France. By contrast being World Tour means committing to riding three grand tours and several other races and Saxo Bank, like Europcar, perhaps doesn’t quite seem to have the depth to do this, at least to be sure of wins in all three grand tours.

The Tour of Poland might not grab you as a vital race, more so since it has been moved to coincide with the Tour de France this year. But in fact it will matter as it is an alternative stage race for Olympic hopefuls to ride. The route hugs the country’s southern border, for a “national” Tour the race is more the “Tour of the Border”, it never visits the capital and many major cities in Poland. But the country is flat and much of the country’s best riding is to be found on the route picked by the organisers so the choice is logical.

Roche in talks
Cyclingnews had a piece about Nicolas Roche earlier in the week. The Irish rider told Daniel Benson “talk of contracts hasn’t gone through my mind yet“.

But I think the image above by Italian journalist Enzo Vincenatti shows Roche having a sit down with his agent Andrew McQuaid just last week. It’s quite possible they were chatting about the weather back home in Dublin.

Tour de Romandie
Meanwhile in Switzerland today sees the mountain stage of the Tour de Romandie. The climbs featured are regular but their length and gradient means if riders force the pace the lead group will get very small. Will Bradley Wiggins climb with the best? The time gaps are small and it should make for a lively finish, expect video from 4.15pm Euro time.

Wiggins is leading the overall now and seems confident as this press conference clip shows. It’s in French to start but finishes in English.

The turtle of Finance! We are no speculators but true investors who favour a steady and consistent capital appreciation. Slow and steady wins the race. Running does not help, one has to invest in due time!

A new team for 2013 was announced, IAM Cycling. Independent Asset Management is a Swiss financial services company and it will back a new UCI Pro Continental team. The squad wants to retain a Swiss identity and is looking to recruit riders from its home country but has admitted it doesn’t have the budget to get hold of Fabian Cancellara. There will be other nationalities too and it’s run by Serge Beucherie, a number two in command of the Crédit Agricole team.

Goodbye Greenedge
Talking of new sponsors, the Australian team will announce a new title sponsor next week so the Greenedge name is dropped, plus all the clothing and team vehicles will have to be rebranded. The squad’s had a good run already, some teams can take time to get going but they’ve already won a monument thanks to Simon Gerrans. Who is the sponsor? I’ve no idea but there have been whispers of about Jacobs Creek, a wine brand, or Huawei, a Chinese Telecoms company. All will be revealed and it’s good to see sponsors from Switzerland to Australia and beyond.

Giro d’Italia
One week until the Giro d’Italia starts and then it’s three weeks of action. The race is always open and surprises can happen on any stage, more so than the Tour de France. But this year’s edition seems even more open, it is hard to pick a favourite right now. I’ve been looking at the route in more detail with a view to doing a preview and it’s been carefully selected to gradually get harder during the three weeks, to ensure the “fight for pink” is not over too early. That said there are some long transfers along the way. But no military aircraft will be used.

Next post: Tour de Romandie: The Moment The Race Was Won