Liège-Bastogne-Liège: The Moment The Race Was Won 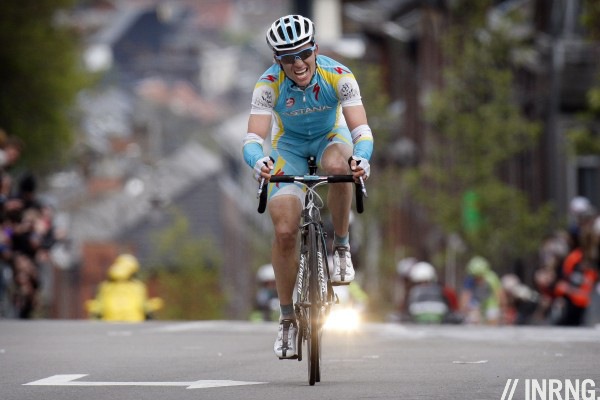 For a while it looked like Vincenzo Nibali was going win Liège-Bastogne-Liège but he was reeled in with one kilometre to go by Maxim Iglinskiy and the Astana rider sailed past and soloed to the line, look carefully and you can spot the losing shade of lime green above. But perhaps this time there was no single winning moment and today’s race was instead defined by attrition and endurance?

Euskaltel’s Igor Anton fell in the neutralised zone, cracking his collarbone. If this post is about the winning moment, Anton’s fall could be the moment the Basque team lost its World Tour licence. Only Samuel Sanchez has banked UCI ranking points for the team this year and Anton is arguably the team’s number two and with him out of the upcoming Tour de Romandie, things look harder.

Returning to the race, a break of six riders was the early move of the day, reduced to five when Argos Oil’s Simon Geschke crashed on a corner. With rain and cold conditions the riders were far behind the slowest schedule proposed by the race organisers. Things first livened up when three riders got away from the bunch. Europcar’s Pierre Rolland, Movistar’s Vasili Kiriyenka and Omega-Quick Step’s Dario Cataldo, all ideal riders to send up the road in support of their team leader.

Regarding leadership, Radioshack-Nissan seem to have some troubles behind the scenes. This has erupted in public over who is the directeur sportif during the Tour de France, with the Schleck brothers wanting Kim Andersen but Johan Bruyneel wants… Johan Bruyneel. It’s probably not about who gets to drive the car but more about who runs the team. Anyway we saw the Schleck brothers dropped off the back with 5km before La Redoute, normally the time when you need to be near the front. Maybe they have other things on their mind. We’ll see. Meanwhile even on La Redoute the race struggled to come alive but this was more about TV than racing. Yes, the riders weren’t going beserk with attacks off the front but at the same time the paced picked up and now riders were being ejected from the lead group, only the TV didn’t quite pick this up. It did get the moment Valverde punctured, quickly grabbing team mate Angel Madrazo’s bike but it was several sizes too small, shrunken just like Valverde’s ambitions in the Ardennes.

All changed when the race hit the Côte de la Roche aux Faucons. Vincenzo Nibali led, accelerating and only a few could follow him. As they crested the top of the climb, as highlighted yesterday, this wasn’t actually the top but only the moment when a short descent happened. Instead of looking around to survey the damage done Nibali just went again. Meanwhile behind a select group had formed including Maxim Iglinskiy but also Thomas Voeckler, Philip Gilbert and Enrico Gasparotto.

Riding solo Nibali now had 18km to the finish line and the wind was blowing. But “The Shark” was better alone as the chase group behind was not organised. Nibali just had to put the power down and whilst he was visibly suffering from the effort, his trajectories on the descents and corners were as smooth as every. Meanwhile those behind just couldn’t work together, understandable given the group was so big that if one worked to pull Nibali back then he’d sacrifice his chances for later. So they started attacking each other and the first move to stick was Maxim Iglinskiy and Joaquim Rodriguez. But the Spaniard – never the best wheel given his size – cracked on the Côte de Saint Nicolas. Iglinskiy took off, by now just 25 seconds behind and reeling in the Shark.

Iglinskiy’s winning move was a long play. Save energy, follow the moves; make the selection on the Roche aux Faucons; go with Rodriguez when the chase group wouldn’t work… and then hunt down Nibali. The actual moment of catching the Sicilian wasn’t really where the race was won because Nibali was cooked by then. Iglinskiy rode up, looked at him, and went past just as the road started to rise for the final climb to the line. Indeed when interviewed by Italian broadcaster RAI on the finish line Nibali didn’t have a cross word to say: “it was too windy on the Saint Nicholas, I tried too hard. Iglinskiy is a first rate rider but I’d have preferred if Gilbert had won“. Perhaps the locals felt that way too but Astana took their second win in a spring classic thanks to Iglinskiy dropping all the chasers to catch and pass Nibali in the last 10km.