The hidden climbs of Liège-Bastogne-Liège

Liège-Bastogne-Liège is the hilliest of the one day classics. Glance at the race profile and you’ll note 11 climbs on the route, plus the climb to the finish. These are described as côtes répertoriées, or “catalogued climbs”.

Only the race has many climbs that aren’t catalogued. One in particular is crucial as it is climbed with less than 20km to go. 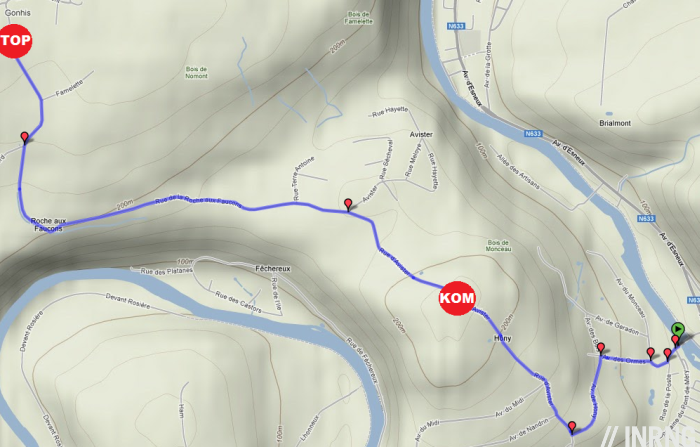 Since it was included in 2008 the Côte de la Roche aux Faucons (“Falcon Rock Ridge”) has become a strategic point in the race. With just 20km to go it is a make or break climb and in recent years has been the place where Andy Schleck has often put in a big attack. It’s tough, being 1.5km and over 9%. You start in Méry, climbing from Meuse valley and go up to the the village of Hony where there’s a line to mark the top of the climb and the King of the Mountains points. But if you think you’re done with the Falcons, forget it.

Then follows a brief descent of only 500 metres and then the road rears up again passing the limestone cliffs where the falcons nest, climbing up and up. In total there’s a climb that is 1.6km long and a gradient of 5.5% to the village of Gonhis, the top of the ridge. Only this climb isn’t mentioned.

Clearly you can’t “hide” a stretch of road, it’s not like Belgium is an unknown wilderness. Rather the organisers want to list only the most identifiable steep ramps and consequently there’s a lot more to the race than the 11 highlighted climbs.

The label of the Côte de la Roche aux Faucons does not mark the top of the climb, it is merely a staging post on the road that climbs up and away from the river valley. As such the identifiable climb is tough but anyone getting over the top needs plenty in the tank to turn a big gear on the climb to Gonhis which is just as long, although not as steep.

This is just one example from tomorrow’s route but it’s typical of the race. The steep ramps may serve as a launch pad for the most energetic riders and the specialist climbers but it is often on the exposed roads afterwards where the weakness of a tired rider is cruelly exposed.

You can see last year’s race in the Youtube clip below just as they start the climb. Andy Schleck goes clear with his brother and Philippe Gilbert on the first ramps of the Côte de la Roche aux Faucons. But later (7m30s) watch as the road is rising to Gonhis and Enrico Gasparotto and Jérôme Pineau are dropped as Gilbert gives it some torque.