Route reconnaissance for the spring classics

For many in northern Europe winter is long. But there are signs of spring in Belgium today. Mother nature can give us clues with early blooming flowers amd cycling has its own annual rituals. Today’s recon rides by teams on the course of the Omloop Het Nieuwsblad are very much part of the spring routine. The spring classics are coming.

It makes sense to check the route of any race but it is essential for a Belgian event. Often you can scan the race roadbook and try to memorise the finish, “roundabout at 3km to go, sharp left-hander at 1500m and the finish line is slightly uphill”, easy enough. Teams usually send soigneurs to the finish who can report any surprises along the way and sometimes the more assiduous squads use Google’s Streetview and other tools to explore the route.

But a race in Belgium has tens or even hundreds of strategic points with narrow roads, cobbles, hills, sharp corners and sections exposed to the wind. If these were listed in the roadbook only a memory champion could recall them… and they’d probably fail after hours on the bike in cold weather with their blood sugar level dropping.

In place of this the reconnaissance, or verkenning in Dutch, is almost essential. Take a flat stretch of cobbles, it is rarely uniform. Perhaps you need to be on the left of the road when you enter to benefit from some smoother path but then need to cross over mid-way; or maybe the wind is blowing hard and there’s some shelter from a building or a hedge. On a climb there could be running water down the gutter meaning reduced traction. This knowledge is vital and it can make the difference between winning and losing.

It’s not just the cobbles and climbs, the approach is crucial too. Teams need to place their leaders at the front of the bunch when entering these strategic points but on a small road there’s no room for more than five riders across the road. The pace gets frantic as riders scrap for every bit of space on the road. All this happens whilst trying to dodge street furniture, from sunken drain-covers to flower pots and even parked cars and spectators. The approach roads can be as important as the cobbled climb. 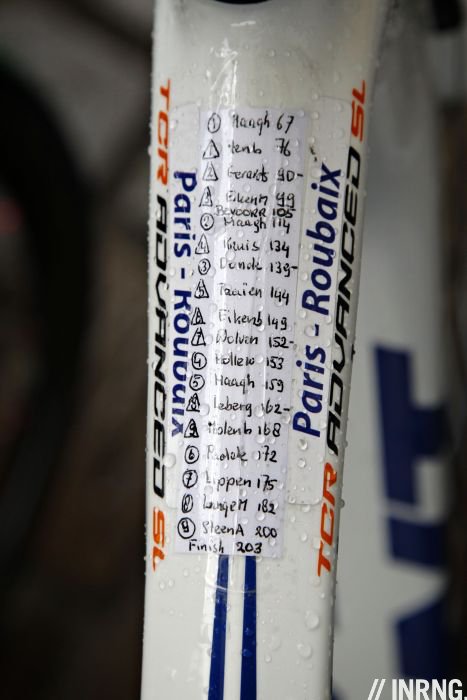 There are so many details to remember that a reconnaissance ride will help but it’s still hard to remember it all, in the past riders would use race radios but these are banned in all races except those on the World Tour calendar and neither of this weekend’s racing is part of the World Tour. Instead it is common for riders to tape details to their stem or top tube to help them remember, the image above is from Lars Boom’s bike in the Omloop Het Nieuwsblad last year. Note the triangles denote climbs, the circles flat cobbles and the numbers state at what point they come in the race, for example the Molenberg is the ninth climb and come after 168km of racing.

Repetition helps, whether reviewing the route over winter for local riders or checking the route several times this year. Above all experience counts, those riders who have done the race ten times remember what happened in years past; the same for team managers who have both ridden and driven the course so many times.

But the verkenning is not for everyone. Foul weather in Belgium today means Omega Pharma – Quickstep won’t be out on the route. “The weather forecasts are not really beautiful, we must not take unnecessary risks” team manager Wilfreed Peeters tells Het Nieuwsblad but his team are in the minority with almost all the other teams due to inspect the course over the next few days.

Media event
Note also that these rides are also part of the Belgian media’s routine. Nobody covers cycling quite like the Flemish press with daily coverage of the classics and even the act of riding on the roads ahead of the race is enough to fill columns and entire pages of newsprint with who is doing what, right down to the number of kilometres ridden and who didn’t ride because of injury and illness.

Summary
Route reconnaissance is a springtime tradition tells us the classics are just days away. These practice rides are essential, a professional cyclist needs to know the roads. Nobody can remember every corner and cobble but the race can be won and lost thanks to these details and a good team won’t be surprised by a tight bend, a hole in the road or rough cobbles. There’s no substitute for riding the route and these rides are themselves part of the build-up to the spring classics. Four days to go…