Having covered European food and drink, an exception to the rule with a quick look at coffee culture in Oman. The Middle-Eastern country is staging a bike race at the moment and many riders seem to be enjoying the experience whilst fans wow at the scenery.

That said lengthy transfers to the start and finish of some stages are causing fatigue, it feels as if the bunch is being used to beam images of stunning landscapes to us. But if riders are tired or you want a taste of Oman, coffee could answer both problems.

The coffee is different. Omani coffee, kar-wah oman-ee-yah, is flavoured with spice, usually cardamom and cloves. Here’s the recipe, lifted from Ya Salam cooking:

1. In a 4-quart saucepan bring water to boil, add cardamom and ground coffee. Continue boiling for 3-4 minutes. Remove from the stove and cover the pot. Allow to sit for another 3-4 minutes. Put the whole cloves in the coffee thermos or pitcher. Strain the hot coffee into the coffee thermos or pitcher.
2. Allow to sit for 10 minutes before serving. Avoid shaking the thermos, as some coffee grains and the cloves will settle to the bottom and you do not want to pour these grains into the coffee cups.

Note there’s no milk or sugar involved. For the full experience, sit on the floor, serve in small cups and serve with dates which apparently help offset the bitter taste.

The addition of cardamom will certainly change the taste. Indeed the cyclist might find the aroma is less starbucks, and more startline. Rather than being transported to the Orient and conjuring up tales of Arabian Nights, the taste could take you to a Flemish kermesse as the camphor is similar to embrocation.

Coffee culture in Oman seems a big deal. Giant coffee pots adorn roundabouts and it customs dictate it is is offered to guests in a house. Like many customs there’s a social code, an etiquette:

Serving Omani coffee has certain traditions to be observed. Such rituals include that the cup should not be filled to the rim. It is rather served with only one fourth of the cup is filled, Also when the person have taken enough coffee he or she should shake his cup as a sign so that the one who is serving stop pouring more coffee for him

Indeed reading about this it seems more part of tradition and custom associated with hospitality as opposed to an everyday drink, similarly I can’t find much evidence of a café culture in Oman but given alcohol is forbidden, the local coffee shop seems a common meeting point. 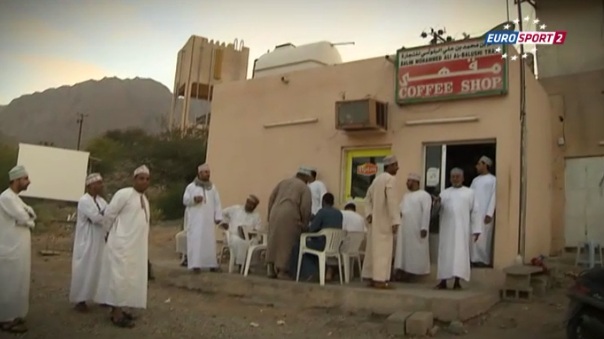 As seen on TV

Given the country sits in the tropics and has baking weather, the idea of a hot drink probably doesn’t appeal to riders before or after a ride although a handful of dates provide some useful sugars after a race. If you can’t make it out to see the race, at least you can find some cardamoms to grind.

Next post: How do you make a race survive?