A history of the Tour Down Under 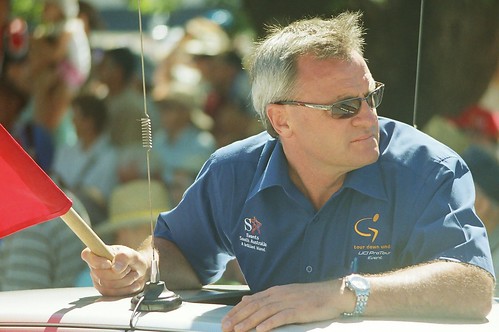 A reader’s been in touch with the history of the Tour Down Under in Australia and I enjoyed the read so much I asked if I could put it on here.

Many races begin for a reason, famously the Tour de France started because a newspaper wanted to create an event so impressive that readership would soar. Paris-Roubaix began because some industrialists in Northern France wanted to publicise the velodrome in Roubaix. A more recent addition to the calendar, the Tour Down Under has its genesis in politics, promotion and even a beer boycott was involved. Here’s the story…

Before the TDU – Australian F1 Grand Prix
For many years, Adelaide was host to a round in the Formula 1 world championship. The race was always the last on the racing calendar and had a party / carnival type atmosphere. I’m not massively into F1 but it was a fantastic fortnight for a small city like Adelaide (population about 1million people).

The race was held from 1985 to 1995 and was very popular with people of Adelaide and all South Australians. We don’t often get ourselves on the world stage politically or economically so this event was important for us.

Towards the end of the contract, South Australia was about to experience a change in government. When Bernie Ecclestone tried to renegotiate the future of the Australian F1 Grand Prix, the incumbent Premier of South Australia, Lyn Arnold reportedly said that it was no point negotiating with him as he will be ousted in the next election and to speak with the opposition. Bernie allegedly spoke with Dean Brown, the soon to be elected premier of the new government who reportedly responded that it was no point in negotiating with us as we don’t yet own the purse strings.

The Premier of neighbouring state of Victoria Jeff Kennett realised what was happening and the announcement that Melbourne – and not Adelaide – was to host the Australian Grand Prix was a huge shock to the people of Adelaide and sent the media on a witchhunt.

There was much anger and deep resentment towards Victoria ‘for stealing our Grand Prix’. Adelaide has always been the little kid trying to play with the big boys of Melbourne / Sydney / Brisbane and the loss of the race hit very hard. There was anti-Victorian sentiment in the press with some supermarkets refusing to stock Victorian beer.

An Idea
In the wake of losing such a major international spectacle, the Australian Major Events (AME) was established by the South Australian government to investigate and identify those major events that could effectively replace the loss of the Australian Grand Prix.

A cycling race was flagged from Melbourne to Adelaide and the advice of former Team Pursuit Gold medallist (1984 Los Angeles) Mike Turtur was sought. Turtur (pictured above) proposed an alternative, which centred around the riders staying in Adelaide but competing in various stages around the city. (NB: Adelaide is situated on the plains and is surround by hills and rolling terrain).

The formula for the race would be that all teams (riders and staff) would stay at The Hilton International Hotel, and would race over 5-6days of stages up to 150km and return each night to the Hilton. The Square city’s main square opposite the Hotel would play host to the Tour Village where Team cars and equipment could be stored and riders could walk across the road after breakfast and grab their bikes for training / racing. It also gives spectators an opportunity to watch mechanics work / clean team bikes after each stage.

The Early Days
The race was given a January spot on the UCI calendar and I remember the first few years being extremely hot and the riders treating it like an extended holiday. I’d be out on a weeknight during the race and riders would be in pubs / clubs chatting up local women and drinking and smoking. Oh, to be a pro cyclist.

Fun in the sun: Phil Liggett "arrests" Stuart O'Grady in '99

And to be honest, the race demanded no more from them. A break would go early on Stage 1 containing 15 or so riders representing most, if not all of the teams and they would get such a big margin on the peloton that the race for GC was effectively over for anyone but those in the break.

I remember hearing a story of Mike Turtur (now race director) going absolutely berserk at the all the team DS’s and riders for not ‘racing’ during one stage letting the break win by huge minutes. Words to the effect of “we pay for you to fly out here and put you up in the best hotel in Adelaide and this is how you repay us. Keep it up and you won’t be invited back”.

It was only ever the Australians that were competitive in the race for a number of reasons; it is the Australian summer, the Euros didn’t take the race seriously, too early in the season for most riders, quality of the field / teams was much lower than what it is today, often allowing local talent to shine.

I was watching one stage in the Barossa Valley that required the riders to race up a reasonable climb multiple times. Three Saeco riders, Salvatore Commesso, Dario Pieri and someone else were quite behind the peloton on the first ascent of Menglers Hill. Minutes after passing us near the top, they turned around and made there way down again, obviously calling it a day and dropping out of the race. Their Saeco DS heard about this and made them turn around at the bottom and the complete the whole stage on their own, far behind the peloton. If the riders weren’t taking it seriously, the team bosses certainly were. (This year’s race also heads up Menglers Hill on Stage 4).

Riders would arrive in Adelaide from a northern European winter about a week or two before the race commences to acclimatise to the weather and time difference although this didn’t always work. I remember a Danish rider from Memory Card Jack & Jones suffering heat stroke in training. The riders found a petrol station and put him into the cool room / fridge in order to get his core temperature down.

DS Feedback
After a few years of successfully staging the event, Turtur received feedback from various DS’s advising him not to change anything. That is, the stages are short and not too difficult which is great given their fitness in January. They advised not to try and make the race bigger and better by including a time trial (equipment logistical nightmares), more stages or too many climbs.

Adelaide-Based Spectator
It is great being a cyclist in Adelaide during the weeks preceding the race as you’d be riding along in the hills and suddenly a professional cycling team would pass you on your training ride. You can visit the Hilton in the morning or evening and see riders hanging around the place who are very happy to sign an autograph and pose for photos.

One of the unique things about the race is that with the stages being so short, many riders trying to peak for the spring classics will often ride back to the city / Hilton from the stage finish (1-2 cycling hours away). I remember sitting on Alessandro Ballan’s wheel as a 20+ group of spectators and pros rode back into Adelaide after last years the Willunga stage.

Costs / Government Backing
The State Government of South Australia underwrites the event via AME. The race is effectively one large tourist advertisement for the state with well choreographed TdF-like helicopter flyovers of prime tourist attractions and television deals that sees footage beamed to Europe and North America.

The first edition of the race reportedly had a budget of AUD$1.85million. If you believe what you read, this is similar to the amount paid to Lance Armstrong alone as part of an appearance fee for attending / racing at the TDU. There were some elements of the media / politics that criticised the government for the fee paid to Armstrong, but post race analysis suggested that his fee more than paid for itself via increased spectators from interstate / overseas and generated.

Despite his polarising stature, Armstrong has been fantastic for the event. His appearance increased the media focus and the spectator interest in the race. It also meant many thousands of visitors from all around Australia came to Adelaide to see the race for the first time. Those people are making it an annual trip which is good for the race and the local economy.

The organisers of the race have also included a L’Etape du Tour mass ride equivalent. Traditionally, the Friday stage acts as the ‘Challenge Tour’ where the public rides the exact stage as the Pros, although starting significantly earlier in the day. The Challenge Tour used to be capped at 2500 riders, but Armstrong’s appearance at the race saw unprecedented interest in riding the Challenge Tour and the organisers have now lifted the cap. Armstrong’s first year at the TDU saw over 8,000 people from around Australia (and some from overseas) compete in the Challenge Tour. Local Adelaide bike shops are also experiencing strong year on year sales although I suspect having a TdF GC contender in Cadel Evans probably helps this cause as well.

Pro Tour Status / Criticisms
The South Australian Government lobbied the UCI heavily for Pro Tour status. The UCI duly obliged but there are many sectors of the cycling press that view the race as a sprintfest without action. And that is a fair assessment, especially when compared to European races. In its defence, the race only provides what the riders are capable of at this time of year – as stated above, a harder race would only negatively impact the good level of support the race receives from teams / riders.

The reason I went into so much detail above about the Grand Prix is to give you an appreciation of why this race has so much government support. The South Australian government cannot be seen to be throwing away what has become an annual pilgrimage for many Australian cycling enthusiasts. The TDU has given a reason for thousands of people to take a weeks annual leave and follow the race.

Summary
The TDU has helped replace the void left by the Australian Grand Prix and has done so in a way that now captures the imagination of more South Australians than the Grand Prix ever did. Everyone now owns a bike, people take time off work to watch the event and suddenly everyone’s a cycling expert. Never in my working life did I imagine talk at the water cooler that revolved around a professional cycling race!

Coincidentally, I also work for Santos, the TDU naming sponsor (an Oil & Gas producer and Adelaide’s largest publicly listed company). I volunteered at the race a few years back with Santos and being able to interact with such an enthusiastic and knowledgeable crowd was a highlight.

This was not meant to be a parochial chest beating defence of the race, rather an overview of someone who hails from the host city and has seen the race from inception.