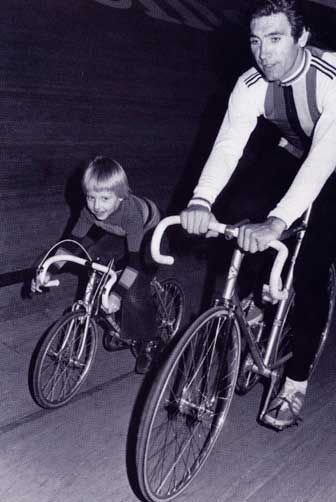 I’ve covered the subject of father and son riders before (here and here) but last weekend Italian newspaper La Gazzetta Dello Sport had a feature on Miguel Indurain and his son Miguel. The five times Tour de France winner is enjoying watching his son progress on the bike and after some promising results in the cadetes category he moves up to the juniors (U-18) with CC Villavés , the club that brought his father in to the sport, as well as Team Sky’s Xavier Zandio.

These pairings are common and there are more, listed below. But can a child inherit their father’s champion abilities or not?

The Gazzetta points out the more obvious father-son combo of Stephen Roche and Nicolas Roche and Davis Phinney and Taylor Phinney. 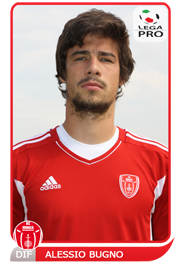 He inherited the big hair

But the one that stood out for me was Alessio Bugno. Gianni Bugno won the 1990 Giro d’Italia, taking the lead on the prologue and keeping the maglia rosa all the way to the finish three weeks later in Milan before finishing second in the Tour de France in the same year. He won back to back World Championships in 1991 and 1992 and took the Tour of Flanders in 1994. Son Alessio is not cycling, but instead plays football for AC Monza Brianza 1912, near the Bugnos’ home in Lombardy. Monza are in the Prima Divisione, the third tier of Italian soccer and Alessio plays as a defender.

Father Gianni stopped cycling and took up his passion of helicopter flight where he works today as a charter and rescue pilot. When you watch the Giro d’Italia many of the helicopter shots come from an aircraft piloted by Bugno senior. Bugno has also had a stalled run at politics and is also working as a rider representative for the CPA, a sort of rider union, making representations to the teams and UCI.

One father-son pro cycling pair missed by La Gazzetta was that of Dietrich Thurau and his son Björn. Before Erik Zabel and Jan Ullrich appeared  “Didi” Thurau stood for a long time as Germany’s greatest cyclist, winner of Liège–Bastogne–Liège and a wearer of the yellow jersey. Son Björn has ridden for several continental teams and with Team NSP he won the best young riders competition in the Paris-Corrèze two day race last August and this was enough to land a contract with French team Europcar for 2012.

Like Mother Like Son
Acquiring the right DNA makes all the difference but it turns out the maternal inheritance from the X chromosome makes a greater difference. In plain English, your mother determines your athletic talent more than your father. Energy for endurance exercise comes from oxidation of fuel and the maximal capacity to consume oxygen is therefore one of the important factors limiting endurance performance and this is inherited from your mother. Your VO2 Max score is quite dependent on your grandmother.

Was your great grandmother a sports champ?

That said you can inherit other things from your father. Long limbs, big lungs and heart volume can be influenced by the father’s DNA. The barrel chest of Miguel Indurain junior could be a paternal legacy.

Broad inheritance
The child inherits more than DNA. It is common to find many a pro coming from a family of cyclists, for example FDJ’s Thibaut Pinot has a father who raced at weekends but only with a local licence. It is common for children to seek inspiration from their parents and “inherit” a love of the sport before they rise to the top.

For those with famous fathers they grow up in a household where elite sport is the norm and get access to support and coaching from their parents and their name can open more doors.

Rare gift
Father-son pro cyclist combos are remarkable but there are not many. I would have imagined more given how common it is for children to follow their parents in the professional world. But cycling and other sports are different, there are skills to be learned but genetic inheritance matters. It’s also common to read of pros saying they’d rather their children didn’t turn pro, they’ve seen up front the insecurity of employment and danger of the job.

One champion alone is a freakish genetic product, in the sense of near-perfect abilities. Genetically the only way to mimic the champion do this would be to clone a Tour de France winner rather than mix DNA and even then we’d have the basic ingredients before we consider aptitude, determination and other characteristics.

Gender bias
I’m concious of the male aspect here. Maybe father-son combos stand out because few women cyclists could make a name for themselves in the past so we don’t have the comparison with champions from the past. Taylor Phinney is the son of Connie Carpenter and perhaps his prodigious abilities come from here. Only bias in our society means it is common to label him as the son of Davis Phinney.

Don’t blame your parents
If you had a slow ride over the weekend try not to put it all down to your parents. Nature vs nurture is a common debate. The body and mind are adaptive. Train right, eat well, rest up and you can make big leaps, put your mind to the task and improvement will follow. You can be constrained by some aspects of your inheritance but you can evaluate your strengths and weaknesses and pick whether you are a sprinter, a climber or another role.

And finally if you have only the most meagre of abilities to oxidise fuel you can still go for a ride. The ability to enjoy your cycling is not DNA-dependent.