A professional cyclist’s work is seasonal and from now until early 2012, the rhythm of work changes given that the racing season is over. What happens in the off-season?

Aussies call it the offy, the French say it’s intersaison. Right now many opt to go away on vacation, a chance to take a break from riding the bike. Those that stay at home will also leave the bike alone for a little bit. This period of time varies, in years past it could last months but now we are already seeing riders tweet about resuming training in preparation for 2012. 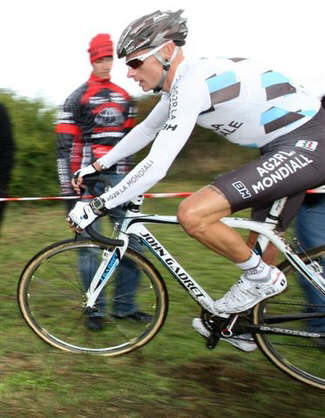 For some it’s a change of season more than an off-season, with cyclo-cross and six day racing. Take John Gadret, fourth overall in this year’s Giro d’Italia. You’ll find him lapping muddy fields and parks across France most weekends. Indeed cyclo-cross began as an activity for road cyclists to keep them fit, the short intense effort being suitable no matter what the weather. But it has become a specialist competition where some earn their living in the winter months. Six day racing is similar although the scene has diminished in the past decade. The format of nightly track racing for six days is similar to road racing and event promoters put on a show with a range of entertainment in the centre of the track. But there are few riders who spend winter “on the boards” as preparation for the road season, again this has become something for specialists.

For most it’s a chance to spend plenty of time at home with friends and family. The season can see riders at home for but this time they can have three months. There’s a lot of free time if a rider gets their daily ride done by lunchtime then the rest of the day is free. DIY projects take shape, some take over the household jobs like delivering the children to school. Others have time for other activities, for example FDJ’s Pierrick Fédrigo enjoys hunting although this activity saw him contract a parasitic disease last year which ruined most of his season; Saur-Sojasun’s Jérôme Coppel goes cross-country skiing.

There’s also the chance to do nothing, to sit back and relax. Large parts of the year are spent idling but in 2-star hotel rooms and airport lounges, sitting still isn’t always the same as relaxing. Plus there’s food, it’s the chance to add a few kilos back and some of this comes via food and drink that would often be off limits during the season.

Contractually riders are linked to their 2011 teams but those changing for next year are already working for their new teams. For example BMC Racing have already held their first camp and in time we’ll have images of riders assembling to ride together and you should spot people in their 2011 kit. I find this a bit daft because if you are attending a team camp arranged by a particular team then you are at work for them, even if you salary is paid by the former team. But it is because contracts run during the course of a calendar year so until 1 January 2012 we won’t see Philippe Gilbert in BMC colours or Mark Cavendish in Sky kit.

Talking of team training camps, these are important events. Some squads will meet several times before the end of the year. Often the first meeting is administrative and logistical. Riders are measured for their bikes and new kit, they assemble to get instructions on the working practices of the team. It’s like many a first day with a new employer. But there are other sides. First comes the lab test where a rider’s fitness is measured. If there’s been too much off in the off season then it doesn’t look good to the employers and younger less established riders don’t want to get off to a bad start with disappointing figures. For some teams there’s team building work. In years past this was a skiing trip and we still see Liquigas wearing their cycling gear on the ski slopes; but Bjarne Riis started using military survival courses for his CSC team. I suspect BMC Racing will be planning ways to make Cadel Evans and Greg Van Avermaet feel at ease with Gilbert and Thor Hushovd.

There can be other work too. Some might have promotional work and photo sessions to complete, interviews to conduct and more.

But there is one race left, the Amstel Curaçao Race. A criterium in the Caribbean island, several top riders are flown in by the Dutch brewer for an exhibition race around the island and it’s the moment when fans get horrendous images of riders in beachwear and not much more. It is not on the UCI calendar.

The backdrop to all of this is the training. For Europeans it means cold weather. If there’s glory and glamour in the spring and summer, the foundations get built now. Rides can end with fingers too cold to open the door back home. Bikes are splattered in mud and gone is the bling of white shoes and carbon rims. Some train on snow-covered roads, for example Liquigas’s Pole Sylwester Szmyd was fined by police after a snowstorm last year prompted him to ride on highway forbidden to bikes in order to find a ridable route home. If the snow is too much then some even train indoors. Edwald Boasson Hagen uses studded tyres for snow and ice but he’ll also use the Norwegian Olympic training facilities:

Until then there’s 85 days to go until the Tour Down Under begins.