The moment Cavendish won the Worlds

Mark Cavendish won the World Cycling Championships in Copenhagen by crossing the finish line first. But the route to victory was more than the 14 laps and 266km around the northern suburb of Rudersdal.

200 metres from the line
Cavendish found a gap on the right of the road and went through it, powering away in the last 150 metres of the race.

The last kilometre
I think the British got swamped in the final moments, their only mistake of the day but Cavendish was lucid enough to find his own way through.

The last 25km
Normally this would have been the time to attack but only the swashbucklers Thomas Voeckler and Johnny Hoogerland went on the rampage and their moves were not allowed to get away. In particular Bradley Wiggins put his abilities to work to tow the peloton around but others teams were keen to neutralise the likes of Philippe Gilbert.

The first 240km
Britain appeared on the front of the bunch almost from the start of the race. Along with Germany, the team did much to control the racing and cap the lead of the early breakaway. At times it looked like a team time trial.

I joked yesterday that if Britain won this would prove a great tactic, if they lost then they would be accused of wasting energy. The post hoc judgement will be favourable this time.

An hour before the race
Cavendish got changed into a skinsuit and wore a helmet with a plastic film. This gave him a tiny aero advantage but if he managed to save 5 watts at 45km/h then the compound effect of this over almost six hours of racing makes a difference. This was British cycling’s “marginal gains” philosophy in action.

Team selection
The British selectors knew who the favourite was but they ensured the workhorses were there with the likes of Wiggins, David Millar, Geraint Thomas Chris Froome, Ian Stannard, Steven Cummings and road captain Jeremy Hunt.

Two weeks before
Bradley Wiggins and Chris Froom stood on the podium of the Vuelta. The confidence and strength from this surely helped. Meanwhile Cavendish rode the Tour of Britain, vital preparation before the Worlds. A stage race is often needed to build the condition needed for a long one day race.

Four weeks before
Mark Cavendish left the Vuelta early with illness. But he went to Girona to train with David Millar and Jeremy Hunt, logging big miles in the Spanish sun. British Cycling dispatched their coach Rod Ellingworth to Spain to help plan.

Two months before
A string of stage wins in the Tour de France saw Cavendish confirm once again his status as the top sprinter. He jumped from 64th on the UCI rankings to 19th and bagged plenty of precious ranking points. These points are used to determine a leaderboard of nations and the higher up the table, the more riders a nation could take to Copenhagen. Britain was able to select eight riders. 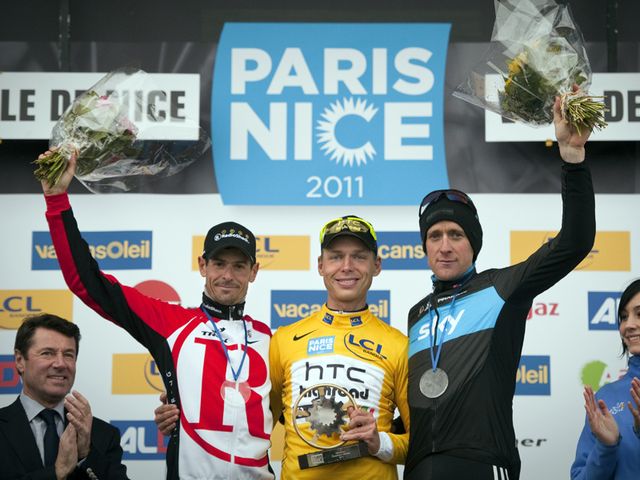 Third place in Paris-Nice for Bradley Wiggins seemed to set him and Team Sky up for the season. If this hadn’t worked perhaps the squad might have set up Rigobert Uran or Thomas Lofkvist.

Two years ago
Team Sky came in to place, allowing the organisational and coaching skills employed by Britain on the track to be deployed on the road.

Three years ago
Cycling Weekly’s Lionel Birnie wrote a great piece describing the ambitions and meticulous planning employed by the British Cycling authorities. They had aimed to win the worlds and began to plan how they could realise this goal.

Prior to this Britain had topped the medal table in the Olympic velodrome, taking the majority of medals. The goldrush planted an idea in the mind of executives at Sky.

Over a decade ago
The British cycling team was languishing. Graeme Obree describes how he travelled to international track events with borrowed equipment and even finding a mechanic for the Worlds was hard. But revenue from the state lottery in Britain were diverted to a scheme to pay sports governing bodies on results basis. This focussed minds at British Cycling and plans were formed to win medals at the worlds and Olympics on the track and in time the British track squad became a force to be reckoned with.

Narrative caution
Finally, whilst we can draw an arc through time here and match a narrative of British planning that stretches across decades to deliver Mark Cavendish to glory, let’s not take this as the only story. There is no doubt that all of the factors above helped but if a rider had closed the door on Cavendish with 200m to go then it would all be different and this piece could be outlining the path from the Australian Institute of Sport to Copenhagen.

But there are other factors. Look no further than the Telekom team that gave Mark Cavendish and then promptly collapsed, leading to an exit of the old guard and new managers arriving, bringing with them meticulous methods as well. Cavendish’s win was also Made in Germany thanks to the likes of Rolf Aldag and sprint coach Erik Zabel. We can add many more factors as well.

Above all there is Mark Cavendish, a phenomenal athlete who is so good he can win without a plan.