The jerseys of the Vuelta a España

There are four jerseys in the Vuelta a España. Here’s a quick summary…

Red jersey
The red jersey is the leader’s jersey. Once gold in colour, in 2010 it became red. In years past it has been orange, white and yellow too. It is worn by the leading rider on the overall classification, meaning the rider who has taken the shortest time to complete each stage in the race. It’s sponsored by Ahorra Energia (“Save Energy”), a government agency. 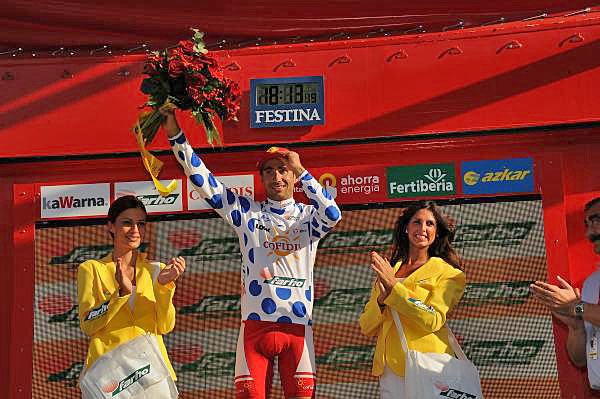 Polka dot
This is for the best climber in the race and it’s like the Tour de France… only with blue dots. It is sponsored by Renfe or Red Nacional de Ferrocarriles Españoles, the Spanish national railway.

Green jersey
The points jersey. Riders win points at the finish line and intermediate sprints and the points are tilted in favour of the sprint finishes. It’s sponsored by España Recicla (“Spain Recycles”), a government agency.

White jersey
The “all rounder” jersey, sometimes called the combination. It is based on the combination of the overall, the mountain points and green jersey points whereby a rider’s position in each competition is added and the lowest standing wins, eg 4th on overall, 9th on the mountains and 2nd in the points equals 15 combination points. Remember the lowest tally determines the leader. The sponsor is Fertiberia, a Spanish brand of agricultural fertilisers.