The Bulls of Spain 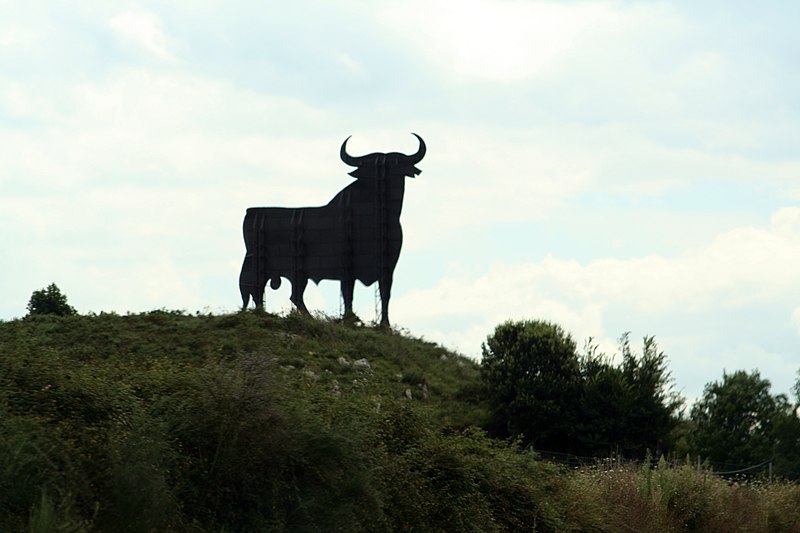 A reader asked via twitter what was the Spanish equivalent of sunflowers at the Tour de France. Just as the Tour de France has pretty clichés of riders rolling past fields of sunflowers, for me the Vuelta a Espana has hilltop bovine hoardings. There’s a story behind this. It starts with vino de Jerez, the fortified wine from the city of Jerez that’s known as sherry in English…

In the 1950s, in a bid to publicise its sherry, Spanish wine and spirits company Osborne Group erected large images of bulls. Wikipedia tells the tale (as well as providing the photo above):

They were in black (with the brand “Veterano” in red on it) advertising hoardings located on sites near to major roads throughout Spain. The original image was smaller and in a slightly different design. It got bigger as a law barred publicity within 150 meters of a road.

Later on a new law was passed in 1994, this time prohibiting such advertising, and so the hoardings were to be removed. By this time the signs were nationally renowned, so although some campaigners wished them completely removed to fully comply with the intent of the law, public response resulted in the signs being retained, but completely blacked out to remove all reference to the original advertisers. The Court eventually allowed these signs to remain on the grounds that it has become a part of the landscape where it is present and its “aesthetic or cultural significance” thus turning it into a figure of public domain.

It’s a bit like the Hollywood sign, put up for advertising but kept once they entered the public conciousness. Note how the ruling to remove the signs from the roads just made the company make bigger ones to put beyond the legal distance.

In recent times, the mention of Spanish cows brings back memories of the ongoing Contator-Clenbuterol saga, with ugly allegations of doping and contaminated meat. So when you watch the Vuelta a Espana, be sure to look for images of riders rolling past hills with bulls silhouetted against the sky as these are a true symbol of Spain.

Next post: The jerseys of the Vuelta a España