Many more readers come to this blog during the week as opposed to the weekends. So in case you missed some things over the weekend, here are a few short items to catch up on. 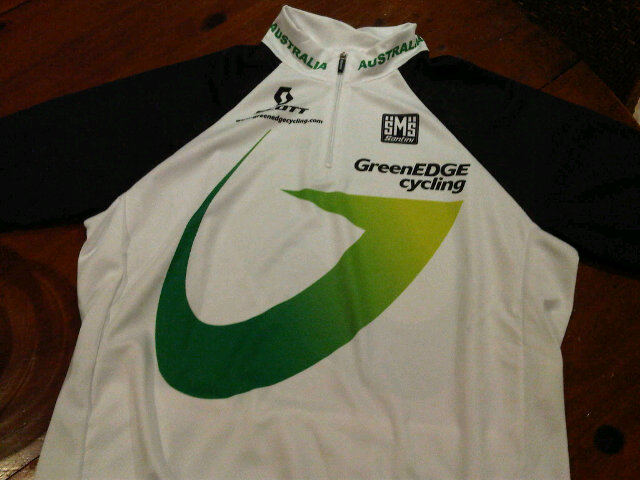 Greenedge will unveil their new jersey but last night there was a storm in teacup over the design. The image comes via Mark Beretta. The design certainly doesn’t look inspiring but I don’t think it’s the real jersey. A well-informed correspondent has emailed to say the design isn’t finished and as a couple of others pointed out, the team is set for a proper launch on the eve of the Tour Down Under.

Taste is always subjective but when designing a jersey, it’s not just how cool it looks at the café stop. It must be visible, both when racers look for team mates but also for TV viewers on helicopter shots. Visibility and identification are what matter, only yesterday in the Vuelta and the GP Plouay I heard TV commentators getting Sky and Garmin-Cervélo mixed up thanks to their black kit. As you probably know the job of a commentator isn’t easy, with images on a small monitor but at the same time they’re broadcast pros. If they can’t spot the difference, how can an average viewer? Each false reference to the team is a valuable loss of publicity.

Wiggins
Talking of the Vuelta, Bradley Wiggins seems to the bookmakers favourite to win the race in Madrid after blasting away his rivals on the stage to La Covatilla in the Sierra Bejar. There’s a big time trial today and we’ll learn more. First every time someone has a good day in this race, they seem to go backwards the next day. But that’s no iron rule and Wiggins will test himself against the likes of Cancellara, Tony Martin, Vincenzo Nibali and Jurgen Van den Broeck today. Second, he’s done well on the steady climbs but the upcoming mountain stages might prove less suitable to his steady style.

Either way, he’s proving to be one of the best stage racers in the world now. Yes, you read that right. On the podium of Paris-Nice, he won the Dauphiné and now he’s a contender in the Vuelta. It’s strange to think that several years ago Cofidis were frustrated by his ways although arguably his first real sign came when he rode the Tour with Cofidis and placed fifth in the Albi time trial in 2007. It gets subjective but Wiggins has won races this year whilst other pretenders have not. Note his strong position in the Vuelta was helped a lot by Anglo-Kenyan Chris Froome too.

Merger mania
There have been many tales of teams looking to merge this year. Some proved wild rumour, some came true like the Quick-Step and Omega Pharma. I’ve written about the topic before, my thoughts were that the teams were being forced to merge for defensive reasons. This isn’t 1+1 = 3. Plus now-familiar rules on team size mean you can’t merge two squads of 25 riders together without a massive fall out.

The latest story is that Leopard-Trek is looking to merge, possibly with Radioshack. There’s the connection with Trek. A well informed reader mentioned this weeks ago. We’ll see what happens here but it’s a reminder that the top team in the world, based on the World Tour rankings, doesn’t have a full sponsor.

GP Ouest-France – Plouay
An exciting finish to the race. Now named after local newspaper Ouest-France (“West France”, actually France’s biggest selling daily), it is held in the Breton town of Plouay. It’s an unremarkable place at the junction of several roads and with an obligatory chateau. Wikipedia says its famous for the bike races. They held the Worlds here in 2000 and the GP organisers are teaming up with the French Federation to bid for the 2017 worlds.

The annual GP already has an air of the worlds with its circuit-based route, plus the Women’s World Cup race. Thor Hushovd was the fastest in the sprint yesterday, but Slovenian champion Grega Bole soloed away for the sprint and Simon Gerrans manage to survive from his strong late move. It’s too early to view this in the light of the worlds but all the same, many Norwegians might be making the relatively short trip to Denmark to support Hushovd and Boasson-Hagen. Yesterday Norway overtook France on the UCI’s national rankings.

Germany’s top team?
On Saturday there was a piece about Germany’s Thüringer Energie Team. Yes there’s Team Net App at Pro Continental level but I wanted to look back a few years at the lesser team from Thuringia as it’s featured Marcel Kittel, Tony Martin, Patrick Gretsch and John Degenkolb. Full story here.

Next post: Chris Froome’s journey from Nairobi to Salamanca