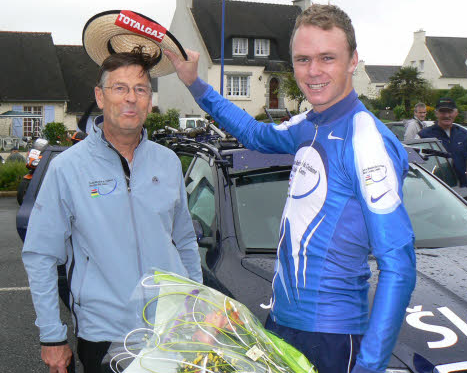 He joined the Barloworld team in 2008 and rode the Tour de France in their red colours. You might remember Robbie Hunter winning the sprint into Montpellier, the first African stage winner in the Tour de France. You might remember John-Lee Augustyn rolling down a mountain. Team mate Moisés Dueñas was ejected for EPO use. But amongst all of this Froome finished his first grand tour and better still, he took a promising 14th place in the final time trial.

Yes we Kenyan
He was born in Nairobi, the capital of Kenya in 1985. He had links to Britain via grandparents and so grew up with a British passport. Nationality is a slippery concept, a mix of legal status, “belonging”, parents and culture, rather than pinning him down. In 2008 Froome told the Belgian media:

He was later sent to school in South Africa. Here he found the sport better developed and soon got an elite licence. By 2006 he took part in the World Championships doing the U-23 road race and time trial in Kenyan colours. He was briefly famous for a crash caught on camera during the TT. He finished 36th and ahead of the likes of Peter Velits, Brent Bookwalter and Maciej Bodnar.

He turned pro with the Konica Minolta squad in 2007. He got several decent results as he divided his time between Europe and South Africa, between the Konica Minolta team and the UCI’s World Cycling Centre in Aigle, Switzerland. The photo at the top is from the Mi-Août Bretonne stage race where he took the overall.

By 2008 he jumped to Barloworld and took up racing in Europe full time, including a start in the Tour de France. His two years at Barloworld were quiet but with some decent results, the sort you can’t fluke. Third in the Giro dell’Appennino and on Mont Faron in the early season Tour Méditerranéen too. Fifth in the Vuelta a Asturias time trial stage.

In the Sky
A step up to Team Sky for 2010 but the results didn’t jump up dramatically. Injured in the Giro d’Italia, he was disqualified right at the end of the race. But plenty of solid performances, a rider able to climb and time trial. I’d been keeping an eye on him, hoping he could do something. In his two years he has proven strong with many top-10 finishes. But at 26, his lead in the Vuelta after several mountain stages and a long time trial is unexpected.

We’ll see how he performs over the coming days but relatively strong performances in the final week suggests he’s got the recovery powers needed. What’s interesting is that his past results suggest anything is possible but at the same time leading the race for a day marks his biggest achievement so far. It’ll help his contract negotiations too. Bradley Wiggins remains the team leader but Froome’s performances give Sky the best cards to play.