Did Highroad ever have a sponsor?

But one answer is that they never had sponsorship in place since the day the team started.

Background
The team was originally known as T-Mobile and had a strong German identity, not surprising since the sponsor was German and the squad was built around Jan Ullrich. But the Germany telecoms company quit the sport after numerous doping scandals turned a large section of German public opinion from pro-cycling to arch-skeptics.

The days of Deutsche Marks and dopage?

Initially the sponsor tried to clean up, hiring Bob Stapleton – a telecoms entrepreneur and avid cyclist – to run the team and to put new staff and riders in the squad for 2007. But during the course of the year more revelations about the team’s past appeared, with tales of widespread systematic doping and to cap it all, a rider tested positive during the Tour de France. By the end of the season the sponsor fled. It had a contract to fund the team in place… so it simply paid up and exited “with immediate effect”, leaving a lump sum of money to fund a team with no name. More of which in a minute. 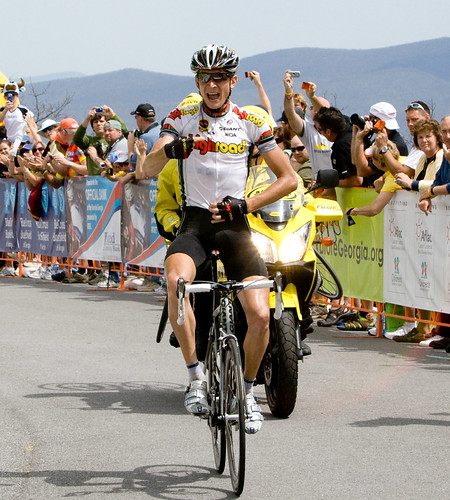 The rump of riders remaining formed the basis of the team known as “Highroad”, named after the management company of Stapleton, just as “Leopard” today is the name of the legal entity behind the eponymous pro team. At the start of 2008 this was a team with no sponsor and they started off in white colours with the aim of attracting a sponsor. They landed US sportswear company Columbia in time for the Tour de France but for 2009 the team was still called Columbia-Highroad, a big “your name here” sign. In time HTC joined as a co-sponsor and when Columbia pulled out, HTC was the main name for HTC-Highroad.

The lump sum
The settlement payment from T-Mobile is unknown, apparently subject to a confidentiality clause. Estimates go from €20 million to €40 million. A good source tells me it was €28 million, an even better placed one says €23 million. Let’s work with the arithmetic. On the basis of €20 million, that’s €5 million per year, on €40 million that’s €10 million per year and €5.75-7 million if we run with the €23-28 million figure. As such this payment wasn’t enough to run a whole team… but might well have gone a long way.

In addition there was also talk of “a couple of well-intentioned investors” putting money into the team.

Now add in money from smaller sponsors like the bike suppliers, components and the others who have supplied the team and you’ve got enough to keep a team on the road for four years, especially if the model is based on recruiting younger riders and nailing down wages, indeed riders were asked to take a pay-cut once T-Mobile quit. One reason Mark Cavendish grew frustrated with the team was that he’s the number one sprinter but on a pay deal seeing him earn less than Damiano Cunego or Carlos Sastre.

In short, the lump sum, potential funds from “investors” and smaller sponsorship could have been enough to keep the team afloat alone. Plus the team inherited the infrastructure from the old team, like cars and the team bus. The was none of the outlay of a new team.

Columbia and HTC
Now the team landed additional money from Columbia and HTC but I believe in both cases the sponsors joined at what you might call “bargain” rates and perhaps not at the normal level expected of a team, with the idea that once a big name sponsor was on-board then the team would look good for other sponsors. But if the jersey is blank, you might as well get some income. In short, the sponsorship received from Columbia and HTC could have been modest but it was additional funding to keep the team going. That said, it seems HTC increased its commitment to the team over time, to reach a significant contribution.

Summary
This was a team that started without a sponsor. Instead it had a pile of cash and over the years this was topped up by extra revenues. Yes, the team did find sponsorship from the likes of HTC and Columbia but I wonder just how significant these deals were, they say Columbia in particular was particularly modest. Could it be that the team struggled from the beginning to land a sponsor and relied on the T-Mobile settlement to stay on the road?

Previous post: The Highroad that comes to an end