The smell of fresh tarmac

They say the Queen must think the world smells of fresh paint because everywhere the British monarch goes it is likely that the buildings have been smartened up with a fresh coat of paint for the occasion. It’s not that dissimilar to France at the moment, where with the Tour de France just days away, final preparations to the roads, towns and even fields along the route are underway.

The image above is from France’s regional newspaper Ouest-France (curiously the world’s largest selling French-language newspaper) and depicts officials from a layer of regional government viewing a section of the Tour de France route. “Potholes, gravel on the corners, badly positioned drain covers: nothing escapes them” says the piece.

If the staff were savvy enough to turn the moment into a photo-opportunity, the inspection of roads is something happening across all of France right now. At the same time, flower baskets are being tended too in villages, roundabouts are being decorated with bicycle-inspired designs and even France’s farmers are getting in on the act, sunflowers are being coaxed in order to be ready for that cliché and soon hay bales will be arranged to spell “Vive le Tour” or some other similar message. 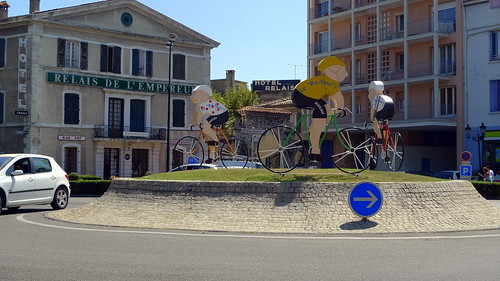 This is detail unafforded to any other race. When Paris-Nice or the Dauphiné rolls though, it’s often an inconvenience because roads have to be closed and if some enjoy the spectacle, a fair share of locals get irate, indeed a few mayors even make a point of saying non to the disruption.

But le Tour is different. Even if it’s a fleeting moment, few towns seem to want to look drab when the race passes through. It’s all a lot of work for a few seconds on TV. I’ve seen small villages hire road-sweeping machinery to scrub the tarmac to almost hygienic levels. But never underestimate municipal pride and remember France is still a very rural country. There are large parts of the country where, for good or bad, nothing ever happens. Open some regional newspapers and it’s an account of village festivals and minor road traffic accidents. So the idea of this huge race rolling though is a big deal and for some places, the biggest thing to happen all year.

Of course, this isn’t to say every section of road is brand new nor that the route has been swept of every bit of gravel. Plus many road repairs in France seem to use a form of bitumen that melts when the summer heat arrives. But big efforts do go into fixing the roads and when you see the race flying through the countryside, enjoy the additional colours that many have worked hard to bring to the race.