Reporting the facts, a recent idea

“A lot of of the journalism is quite bloggy, opinions rather than facts, and riders try to get in the results to impress those journalists. It’s like when you were an amateur and you had to prove yourself all the time to become professional. Nowadays, it’s like that in the professionals, too.“

So said Mark Cavendish in a pre-Tour press conference in London last week. I’d listened to the Real Peloton podcast and heard the quote – amongst the audio interference – and thought his observations on the media were some of the more interesting things from a session that, via the recording at least, sounded a bit dull.

Although interesting to see Cavendish is aware enough to review the media, I didn’t think the point was worth commenting on. But against this there is a small point to make: cycling has a long tradition of lyrical and colourful race reporting. Indeed many reports have been works of fiction.

This year’s Tour de France celebrates the passage of the race over the Col du Galibier 100 years ago. Here’s race organiser and journalist Henri Desgrange:

“Haven’t they got wings, our men who have been able to climb up to heights where even eagles don’t fly? Oh Sappey, Oh Laffrey, Oh Col Bayard, Oh Tourmalet! I shall not fail in my duty to proclaim to the world that you are like an insignificant and small beer compared to the Galibier: all one can do before this giant is doff one’s hat and bow.”

I suspect you’ll get that quote a few more times in July. Note the romanticism of the words, Desgrange isn’t describing facts like the gradient or the length, he’s eulogising. Even today the Tour de France measures climbs with a scheme that ranks the ascension by difficulty, going from the easy fourth category climbs to the toughest hors catégorie climbs, meaning “beyond categorisation”. Note the Spinal Tap style linguistic inflation here, they could just as well have categories going from 5 up to 1. But no, the climbs are so tough that they are beyond rational description.

Indeed in the early years of the sport race reports in newspapers like L’Auto, La Gazzetta and L’Equipe were florid accounts… and at times fictional. Watch a race today and often – admit it – you can fall asleep in front of the TV sometimes. Root out a copy of L’Equipe from the 1950s and even the most dull stages were written with beaucoup hyperbole. Don’t forget this was an age before TV so nobody actually saw the race from start to finish, leaving journalists with a blank page. 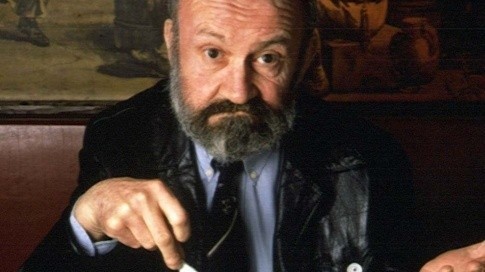 Desgranges was talking his book, hyping up the race in order to sell copies of his newspaper. But this tradition continued for a long time. French philosopher Roland Barthes wrote about the Tour de France. But perhaps the greatest storyteller of the Tour de France was Antoine Blondin. He was more than a sports journalist, you could describe him as a novelist, politically engaged… and a drunkard too. But his pieces in L’Equipe were often daily gems. Here’s Bernard Hinault on Blondin, courtesy of Wikipedia:

“The most banal event becomes significant to Blondin; he has only to see it and write about it. He raised the status of the Tour by giving it his own cachet; it became a myth to be renewed every year. No matter how predictable the race, he could maintain the interest in it.”

Blondin probably merits a whole post on here for himself, if not several accounts for his writing. By contrast today’s race reporting pretty factual. For sure a race report is not a forensic account, nobody can interview every rider and then cross-examine their post race testimony until a perfect account is written. But TV images do ensure we all see most of what happens and as such accounts today of races are pretty matter of fact.

Conclusion
Cavendish could be right, maybe riders are increasingly fighting to get noticed? Maybe race reports express an opinion on events that doesn’t tally with a rider’s experience.

But for half a century the sport tolerated fictional accounts precisely because journalists could turn a rider into a hero with their pen or typewriter. The public was usually none the wiser because nobody could follow a race or a stage in its entirety before television arrived.

Even in recent times the press room might have collectively suspected a rider of cheating but editorial pressures ensured few doubts were aired. That’s largely changed now, for better or worse and for me, the race reporting I read seems pretty factual. Nobody can invent things these days.