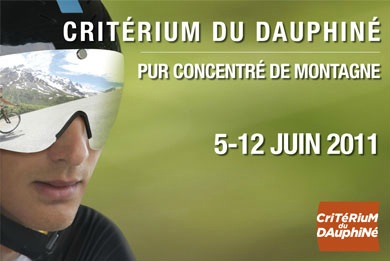 Seven stages and a prologue, this is a week long stage with something for everyone. Sprinters, climbers, breakaway riders and time trial specialists all get their chance. But by the end of the week I’d expect to see a strong GC rider take the win, one who can perhaps climb better than he can time trial.

What’s the porpoise?
The race used to be run a regional newspaper, Le Dauphiné Libéré but is now run by ASO and renamed the Critérium du Dauphiné. Dauphin is French for “dolphin” and in the 12th century, the local ruler Count Guigues IV of Albon bore a dolphin on his coat of arms, no doubt to signify his well-travelled status. It was a separate region that saw its ruler forced to sell up because of big debts and in 1349 a union with France was created and the porpoise identity has remained ever since.

The contenders
For the overall, perhaps Robert Gesink, Cadel Evans and Jurgen Van Den Broeck stand out. For me Van Den Broeck could do with the win, he’s been consistent in the Tour de France, a podium contender but I’m pretty sure he’s never won a race as a pro. Not to knock someone capable of a top-10 finish in the Tour but I prefer to see a rider win a prestigious race like the Dauphiné rather than take 7th overall in July, even if the economic rewards suggest the latter can pay more. But there are several more names, including last year’s winner Janez Brajkovic, not to mention Tony Martin, Ivan Basso, Samuel Sanchez and maybe Bradley Wiggins, Rein Taaramae and Benats Intxausti too

Wednesday’s TT stage around Grenoble is key. It’s a tough course, lots of changing gradients and corners and a course that will favour the climbers who can hold their own against the clock over the powerful TT specialists. Bradley Wiggins and Tony Martin will appreciate the course, but the likes of Taylor Phinney and Lars Boom probably won’t.

Fun factor
The Dauphiné is always a good test for new talent but this year’s start list sees a lot of older riders and teams taking to the start,  a mix of riders being warmed up for July and experienced riders. Watch out for FDJ’s Thibaut Pinot, a promising climber and at the other end of the age spectrum, David Moncoutié could land a stage win.

Less fun factor
For me this is the first race of the year that often sees real heat. Of course the Giro gets hot but the sunshine in June melts French roads, we see dessicated roadside verges and more. Only right now the Alps have had a cold snap with fresh snow falling and some cols that had opened for summer have been temporarily shut. As such the weather could be a factor in the race, especially if the big GC names saving themselves for July prefer to avoid pushing themselves in wet or even icy conditions. The long range forecasts suggests cloud and rain, perhaps some snow at high altitude.

I won’t preview every stage in one go now but here’s the first weekend:

At the foot of the Col de la Croix de Fer, the prologue sticks to a flatter route. It includes a listed climb but the town is broadly flat. A slight curiosity is the lunchtime start, with the first rider off at 11.40 and the last at 14.35 meaning an intense seven minute effort conducted in the aroma of roasted chicken from the numerous cafés. The course has a few corners and roundabouts, it is not about pure speed but acceleration too.

Skirting round some of the big climbs and high mountains, as well as Cofidis’s Samuel Dumoulin’s house, the stage is rolling to start with before a 10km ramp up to the Chartreuse massif. The final climb isn’t steep on average but contains a few steep corners and it’s certainly not the place for the sprinters. It’s the sort of terrain where Thomas Voeckler, Alexander Vinokourov, Cadel Evans and many others might want to have a try before the likes of Boasson-Hagen eye up the sprint amongst the final contenders.