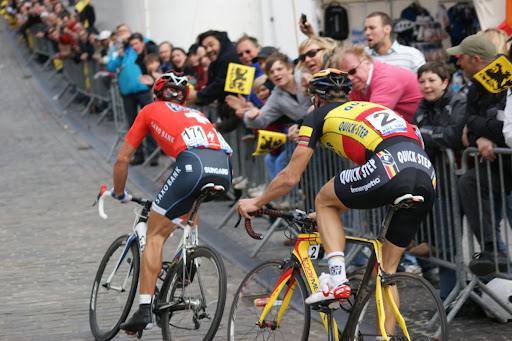 The penultimate climb of the Tour of Flanders is so good they named it twice. Some call it the Kapelmuur, some call it the Muur van Geraardsbergen but it’s the same thing. In fact there’s also the French name, the Mur de Grammont. Either way it is a decisive climb for the race.

Two names, two climbs
Kapel means chapel, muur means wall so it’s either the “Chapel wall” or the Wall of Geraardsbergen. There is only one route to the top but it has two parts. First the riders cross the Dender river and then head into the city of Geraardsbergen. No metropolis, it is has city status from medieval times.

Geraardsbergen coat of arms (and legs?)

Note the coat of arms: cobbles topped by a cross. Riders flash through a classic Flemish market town, climbing up past the town square on roads normally pedestrianised. Here he roads are wide and easy but suddenly there’s a sharp corner, the race turns right and hits the Oudebergstraat. This means “Old Hill Street”.

It’s here that things kick off. Simply pronouncing Geraardsbergen is enough to make an untrained throat sore, ride it and the legs burn. Multiple winner Johan Museeuw compared the sensation to orgasm.

Either way the cobbles are rough and with steep sections. The route is hard and correct positioning is essential given the sharp camber, at times the road has a real hump of a camber with rough cobbles in the middle and troughs on the side. Whilst the riders will have faced worse before, this is still boneshaking stuff. Tom Boonen famously cramped up last year as Fabian Cancellara rode away for the win. It tops at 16% on the steepest corner, where woodland shrouds the cobbles to ensure they stay wet for as long as possible. The road opens up towards the top but the embankment is now human, fans occupy every possible piece of terrain.

See the image, hear the sound

The locals say “the Muur choses the winner” and like many sayings, this isn’t always the case but it makes sense. It’s certainly one of the hardest climbs and coming just 16km from the finish it means that it can be very selective, often a small group of contenders can start the climb together but the configuration changes by the time they pass the Oudeberg chapel at the top. Sometimes it’s not so much who gets over the top first but who is struggling to stay with the kopgroep. If you want to know who will win, watch the legs.

By the kapel the road levels out at about 110 metres above sea level. But the difficulty is not over as the top is an ideal place to attack. The legs are tired, the body is weak and the mind is fading and maybe a crosswind is blowing too. A sharp attack here can pay dividends.

Wall of sound
But the best thing is the atmosphere. The sloping verges are packed with roaring crowds and if you had to a pick a single place to watch the race it would be here although many have the same idea and it gets busy from early in the morning. Indeed it’s such a memorable experience that people have even written songs about it. Dutchman Alex Roeka sings in the video below. It’s not exactly a masterpiece but how many other climbs have their own songs?

A kind reader has pointed out that you can get the rough and raw lyrics online obviously they work better in the original Dutch but here is a taste:

When the wet wind penetrates your bones
And sings the hammer down your ear:
“This is a slap on your neck!”
The cobbled street, your legs turn
And the beast gnawing pain in your knee,
The end lurks in the muck.